In a recent blog post, University of Minnesota biology post-doc Jeremy Yoder takes a hatchet to my campaign to promote "Don't Sleep With Mean People" as the new Golden Rule of sex. He dismisses the concept as "inane pseudo-scientific claptrap," questions whether it's a serious suggestion or just an elaborate joke to teach evolution (it's both), and concludes with some faint praise: "I know that Brinkman can do better than this." Ironically, his example of my "better" work is the song "Performance, Feedback, Revision," of which "Don't Sleep With Mean People" is just a subcategory. Act like a jerk (performance), fail to get laid (feedback), act like less of a jerk (revision). I could respond by lobbying Yoder's current sex partner(s) to put my slogan into practice, but I don't know them, so I'll settle for an old-fashioned rebuttal.

Yoder starts his criticism accurately enough: "Brinkman thinks ... that if everyone followed his advice, we could select meanness out of the human population over some unspecified period of time." Of course I think that! As an aspiring evolutionary biologist, he should too. In fact, a similar experiment has already been done on another species: the silver fox. It took only 50 years of intense selective breeding to turn a vicious wild animal into a friendly domesticated one. Is Yoder actually arguing that it would be impossible to achieve this same effect with humans in principle, or just that it would be difficult (impractical, immoral, undesirable) in practice?

These questions hinge on two of Yoder's main critiques: whether the trait in question, "meanness," can be strictly defined, and whether or not it has a genetic basis. The first relies on a false distinction: Either we all agree perfectly about the definition of "mean" or we all have a unique and arbitrary definition. The obvious alternative is that we can agree on most of the definition while disagreeing about a smaller subset of tricky cases, and that's all we need for this purpose. Even if each person defines "mean" slightly differently, as long as there is some agreement (i.e., murder, torture, bullying, extortion, aggression, rape, coercion, etc.), and as long as that consensus serves as a common benchmark for selection, and as long as the difference between "mean" and "nice" behavior has some genetic basis, there will be an evolutionary effect.

Yoder complains that the evidence that I posted for the genetic basis of meanness was insufficient, and he has a point. The current evidence for direct links between human genes and behavior is more suggestive than conclusive. But it's very suggestive. I originally pointed to this study and more recently added a link to this one, both of which show a correlation between a specific gene and certain kinds of aggressive or hostile or rash behavior (i.e., the kinds of actions that either are mean or could easily get mean with a little escalation).

Another reason I think meanness is partially genetic is the work of evolutionary psychologists Martin Daly and Margo Wilson, which interprets violent crime and murder as adaptive responses to high stress, competitive, dangerous environments. Daly and Wilson's research is too complex to fully summarize here, but if you're interested, their argument is captured nicely by this article, and I do my best to describe it in The Rap Guide to Evolution and in my TEDxSMU talk. 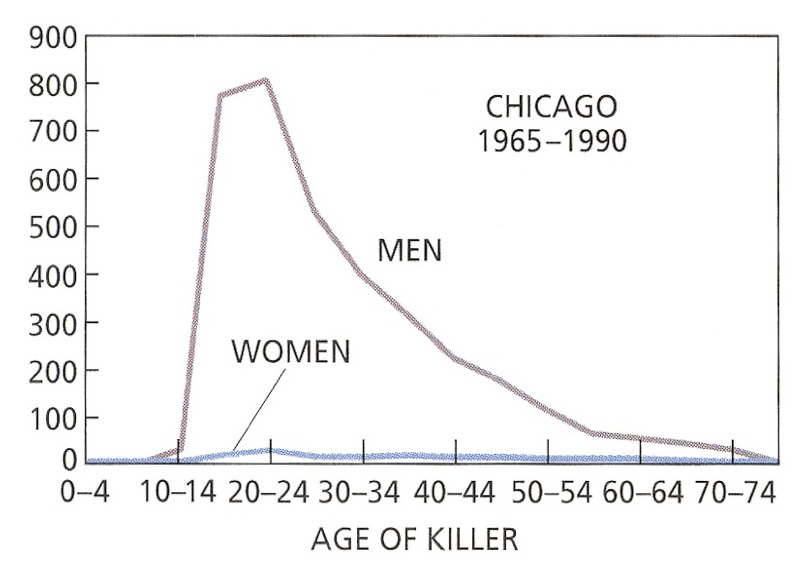 A picture is worth a thousand words, so take a careful look at the homicide statistics for the city of Chicago (above), revealing the number of murders committed by both sexes at each stage of life. If the forms of meanness shown in this graph aren't at least partially caused by evolutionary adaptations, then why are they so much more likely to be perpetrated by young men than young women, starting at exactly the age of puberty, escalating until the average age of parenthood, and then declining until death? How could "culture" possibly explain that pattern completely when the same trend can be found cross-culturally around the world?

Yoder dismisses (my presentation of) the Daly and Wilson research at the 2012 Ottawa Evolution conference with a sneer: "[Brinkman] had the chutzpah to tell a ballroom full of evolutionary biologists that teenage male aggression must be an adaptation because teenage boys are aggressive. Dude's not big on the rigorous evolutionary hypothesis testing." It's hard to tell whether he objects to the original hypothesis or if he just didn't follow my summary of it, but either way, his statement is a proud display of ignorance.

Given the recent evidence that Genghis Khan has 14 million living descendants, the idea that we have evolutionary instincts for instigating violence shouldn't come as a huge surprise, but neither should the idea that we have competing instincts for avoiding and deterring violence. It's possible for these opposing instincts to coexist in the same species and be flexibly deployed in response to different environmental triggers, and this is where "Don't Sleep With Mean People" works on multiple fronts. The more it catches on, the more it will condition the (social) environment to foster kindness and altruism, because sexual ostracism is a powerful motivator. And as a secondary function, it might also reduce the frequency of mean genes over time. As Rob Brooks points out in his recent blog post about the #FreeJahar craze, these instincts run deep and won't be easy to overcome, but sexual choice seems like a good place to start.

Yoder's attack blog also complains that my campaign is "heteronormative as all hell," which of course is true of the genetic component only. The only sex that leads to reproduction is heterosexual, but the cultural impact of "Don't Sleep With Mean People" is equally available to gay men like Yoder. This perceived (but imaginary) insult may have done more to provoke his vitriol than the actual scientific basis of my campaign.

In the end, Yoder's critique finishes with an interesting twist: "Confidential to BB: Come back with a project that actually teaches people about how evolution works, and I'll chip right in." Now we're getting somewhere! I've tried to make it clear that "Don't Sleep With Mean People" is that project, the perfect conversation starter and thought experiment for exploring the implications of mate choice, sexual selection, courtship strategies, phenotypic plasticity, artificial selection, human evolutionary history, behavioural genetics, gene/culture coevolution, and many other key areas of the field, each of which will be explored in the short documentary film I intend to produce with the crowdfunded money.

I hope Yoder will do the honorable thing and cough up 10 bucks. If he does, I might even interview him for the film.