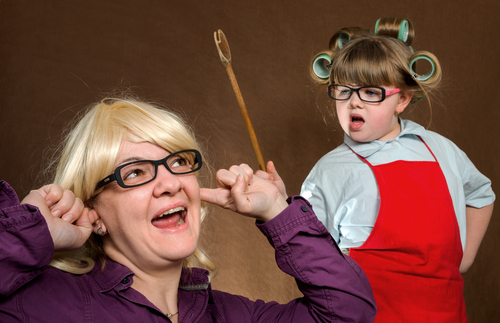 Getting our kids to talk to us is something we parents constantly strive for but don't always know how to do. We've learned not to start a conversation with "How was your day?" or "What did you do at school?" Sometimes, the best conversation starters come from our kids. Sometimes, the worst ones come from them, too.

In our family the best and most meaningful talks typically happen at bedtime when everyone is relaxed and undistracted. Plus, the kids have learned that the best way to sneak in a few more minutes before lights out is to keep talking.

As much as we want kids to open up to us, and it's great when they initiate a good conversation, there are seven conversation starters I don't want to hear from my kids.

Promise you won't be mad at me? There simply isn't a right answer to this question. If you say yes, it's like giving your kid a free pass to get away with something that probably warrants a consequence. Say no and you risk not hearing about an incident that you likely should know about. Recently, during our snuggle time, my 11-year-old son Noah began a conversation by asking this very question.

"When I was like seven or eight I found a ring at grandma's house that looked really cool so I took it."

"It was shiny and it had white stones."

My stomach churned while my heart sank and felt like it stopped beating all at the same time. My parents had just filed a police report after several pieces of jewelry, including my grandmother's sentimentally priceless diamond wedding ring, were stolen.

"I felt bad for taking it, so I flushed it down the toilet."

Turns out the ring was not an irreplaceable family heirloom. It was a piece of costume jewelry. Still, I have yet to recover from the emotional trauma of this conversation.

Are you going to tell Dad? Spouses shouldn't keep secrets from each other (unless the husband is planning a romantic weekend getaway for his amazing, hard-working, loving wife). If my daughter tells me she has a crush on a classmate and asks me not to tell my husband, that doesn't count. But, if the secret has to do with getting in trouble or making poor choices, then all bets are off. Dad is going to find out.

The challenge is that I want my kids to feel like they can always talk to me or my husband, but they also need to know that in serious situations, both parents have to know. In the case of the flushed ring, when my son asked if I was going to tell grandma, I said no; he was going to have to let her know. (I did give her a heads-up phone call so she knew before the story started that it wasn't going to be as bad as it sounded.)

I need help with my math homework. My last math class was in high school, and I really don't know how I passed. Somehow I managed to skate through college without a single math class. Math homework is doable until the fifth grade. After that I have to defer to the closest adult around. Last year we asked the UPS driver if he remembered how to simplify fractions. He did, but he had to finish his route and couldn't stay to discuss numerators and denominators.

You like him better. Really, I don't like anyone one of them better. But they never believe me, so I've stopped trying to make my case by saying things like, "I love you all the same" or "I don't have a favorite." Sometimes I tell them that my favorite is the kid who is behaving the best at the time.

That's not fair. In all fairness, I don't hate this one as much as I used to since I found the perfect response. "You don't want things to be fair," I tell them. My oldest doesn't want to share a bedtime with his siblings, and the other two don't want to share the same restricted diet as their brother with multiple food allergies.

Can we get a dog? For the billionth time, no, we cannot get a dog. I know that despite your promises to take care of a dog, to walk it, clean up after it and all that other b.s., the novelty of your new pet will wear off quickly and your's truly will have a fourth child. So please, stop asking because I am afraid that one day I will cave and we will end up with a puppy.

I'm bored. What can I do? I've also learned how to best respond to this one so I don't hear it as much. I am always happy to offer a list of choirs, projects, or non-electronic options. Nobody ever likes my suggestions. Slowly, my kids are learning to stop complaining about boredom.

More:
Parenting Parentsraising childrenparenthoodcommunications
Newsletter Sign Up
Raise the kind of person you'd like to know
Subscribe to our parenting newsletter.
Successfully Subscribed!
Realness delivered to your inbox