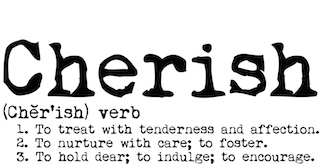 As a woman the desire to be cherished may seem a bit quaint in light of the recent political sparring between Presidential hopefuls Donald Trump and Hillary Clinton. In the on-going war of words, Mr. Trump proclaimed his pro-women credentials by saying,

I cherish women. I want to help women. I'm going to be able to do things for women that no other candidate would be able to do, and it's very important to me.

In response, at a recent New Hampshire event, Ms. Clinton took aim by,

referring to Trump's recent defense of his attitude toward women, Clinton shot back: "If it's all the same to you, Mr. Trump, I'd rather you stopped cherishing women and started respecting them.

Herein lies the biggest roadblock to Ms. Clinton's success--indeed, it is at the root of many challenges we face as a society.

What Ms. Clinton did in asking to be respected rather than cherished, is to dismiss feminine power. She not only rejected a key source of her power, she dismissed a whole set of qualities that are needed to address the issues facing our society.

The word cherish has various meanings--to love, to hold dear, to care for and nurture--all contribute to the feeling of something valuable and essential. Further the Latin root is both masculine and feminine and shares a common origin with the word charity, which means an activity or gift that benefits the public at-large. How amazing would it be if feminine qualities were cherished as gifts that benefit the public? Indeed, it is what the public wants to see in our leaders.

Feminine power is not about being female--or, as it is too often equated with being weak and inferior. Rather feminine power is vital to our success individually and collectively. It is the power to create; it finds connections, brings people together, utilizes complimentary strengths and inspires the collective forward by acknowledging that what one does affects the whole.

To fully thrive feminine power needs to be held by the masculine--in other words, it needs to be cherished. Masculine power is about drive; it is active, focused and reaches goals. It protects what is most valuable and ensures the individual and whole survive. A key impediment to effective leadership is the inability to acknowledge the power and necessity of both sets of characteristics and to acknowledge that they can be embodied in both men and women.

It is dangerous to pursue one without the other--and that is exactly what Western culture has done for the past few millennia. We are a society that values the masculine, accumulating power for the sake of wielding it over others and to hold in the highest esteem the ability to take life rather than create it. We have rejected feminine power as weak. Being attune to our interconnectedness, valuing happiness over positions and possessions and a desire to contribute to the greater good are seen as, well, quaint and not the purview of the successful.

The way forward is not swinging the pendulum in the opposite direction; it is in finding a balance of the two. It is knowing that each person contains a unique blend of feminine and masculine qualities, be they a male or female, and that all these qualities are necessary for effective leadership and addressing the challenges we face each day.

This is the blind spot in the current crop of presidential candidates. Immersed in an unending partisan war only the hyper-masculine survive in the kill-or-be-killed environment. Yet, many Americans are yearning for a way out, a way to get beyond the back-and-forth of one side dominating the other without progress and to finding solutions to the challenges before us. The path forward is found in valuing both the ability to create and achieve--not just achieve a position and then do nothing with it.

Donald Trump is soaring in the polls because there are Americans who are frustrated by a lack of progress and see the answer as being someone who is unapologetically hyper-masculine. While Mr. Trump may cherish the women in his life, his failure to extend that same affection to all people reveals there is ample opportunity to develop his feminine power. If he truly wants to be President he will need to move beyond his angry base and embrace cooperation not just domination--admittedly a highly unlikely scenario.

Ms. Clinton, like Mr. Trump, wants to campaign on being tough, decisive and respected. Sadly, she continues to reject the qualities that so many originally found to be her strength--a valuing of the feminine. What Americans want is a candidate who exudes feminine power, not one who is simply female.

Unlike Hillary Clinton and the women who cheered at her rally, I want to be cherished. I know the power I offer when all my qualities are valued and respected. Power to be my best and do my best in the world using talents and skills from both my feminine and masculine traits. Ultimately, it is what everyone wants and the candidate who embodies it in the best way will win.