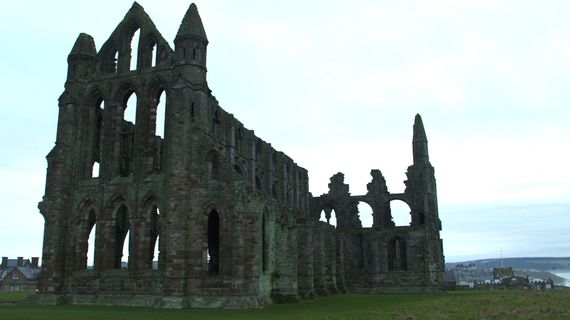 One of the most hauntingly beautiful and eerie places in England is on the northeastern coast of Yorkshire in a tiny town called Whitby.

Long a vacation spot for Brits, it has also historically given inspiration to writers like Lewis Carroll, Charles Dickens, and Bram Stoker -- who based one of the most famous scenes from Dracula in the town. 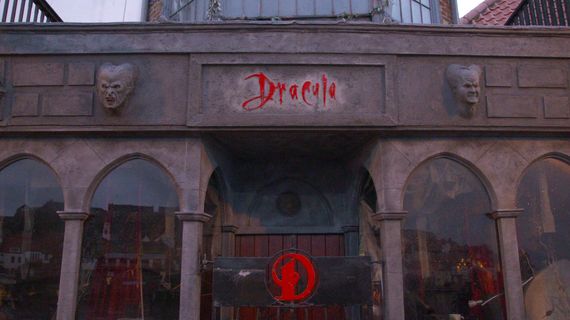 In the book, Dracula (the name itself taken from a name Stoker found in the Whitby public library) arrives in England on the ship Demeter, which crashes into the port. The captain is strapped to the wheel and no one else is alive. The cargo: coffins full of dirt (from Transylvania). After the crash, a large black dog is seen bounding from the ship and running up the cliff stairs to the ruins of Whitby Abbey -- which is as creepy in real life as it is in the book [Editor's note: Who the heck walks around a graveyard at night -- it's like asking to be bitten].

Related: How to Hunt for Buried Treasure in England

There's been an Abbey on this cliff since 664, when it was established by the Celts, and it operated until 1583 when Henry the VIII closed all Roman Catholic places of worship. Alongside the old Roman Catholic ruins is a new(er) protestant abbey -- complete with an ancient graveyard and mists that roll in a few times a day, adding to the creep factor.

The town has embraced the famous literature it has inspired. Twice a year there's a huge annual goth fest called the Whitby Gothic Weekend, during which thousands of people arrive in their best corsets, fangs, and dark eyeliner to troll the streets.

Related: The Ultimate Guide to an Epic British Pub Crawl

But the real attraction is Whitby Abbey itself, which looms large over the town. Inside the attached museum you will find historical artifacts, stories, and remnants of the town's past -- before strolling through the Abbey ruins. 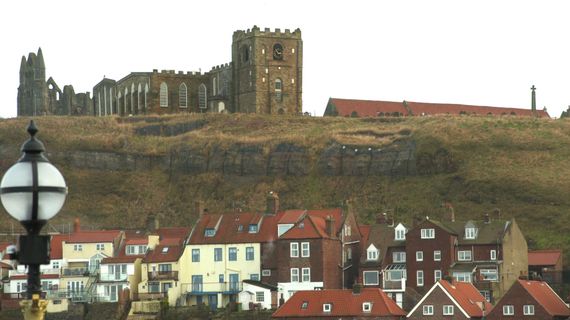 No trip to Whitby Abbey is complete without at stop at the most stellar gift shop I've encountered in years. In it you can buy anything from a full chain mail suit of armor, helmets, balls and chains (real ones), swords, all sort of books on Dracula and ... blood cordial! it's sickly sweet and mildly alcoholic (reminding one of, say, Manischewitz), but if you're in the mood to go full Dracula, it's the way to go. And the shopkeepers are generous with their "taste test" portions.

Related: You CAN Go Home Again: A Walk Down Memory Lane in Leeds

Bonus: There's a Fisherman's Wife in Whitby -- so if you can't make it to Leeds for the best fish and chips ever, don't worry! And double bonus: The restaurant is located on a cliff overlooking the ocean, the port and the Abbey.

WATCH the amazing video now and let me know what you think!