I had no idea it was Women's History Month this month, or even that there was a Woman's History Month (who knew?), but I just finished a marvelous book entitled Grandma Gatewood's Walk about the first woman to walk the entire Appalachian Trail, who certainly deserves celebration.

Sixty-seven-year-old Emma Gatewood, my new heroine (sorry, Amy Schumer!), had read a misinformed newspaper article that described the Appalachian Trail as a pleasant walk with many trailside shelters. She was a hardy mother of eleven who never drove and routinely walked miles to friend's homes and on errands, so she decided that she would try to walk the Trail.

After hitchhiking and taking a bus to Mount Oglethorpe, Georgia, this hardy grandma set off wearing tennis shoes, no sleeping bag, and a drawstring sack casually slung over her shoulder. Her bag held, among other things, some clothing, peanuts, raisins, a Swiss army knife, a jar of Vick's salve, and a shower curtain to keep off the rain. (I had to italicize that. A shower curtain?) Astonishingly, this tough woman made it over all 2,050 miles of the barely cleared Appalachian Trail over the next five months. 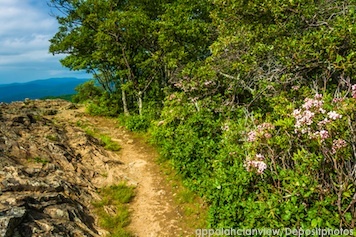 I stayed up late one night reading about Emma's journey, reluctant to put my Kindle down. Emma woke up with field mice in her hair, and often ate berries and leaves (sassafrass, sorrel, spearmint and wintergreen, in case anyone reading this is ever lost in the woods) along the trail. She was an outgoing woman and stopped at houses along the way to ask if she could sleep on a porch or in a shed, and was many times asked inside and given a warm meal.

She slept at a few hotels when she ventured into towns for supplies or a new pair of tennis shoes, but she usually slept along the Trail, on picnic tables, in old sheds and abandoned buildings, or curled up on the ground, covered by leaves or moss.

Sometimes at night she built fires and then slept on stones she'd warmed in the fire. (Okay, I had to italicize that, too.) She routinely walked 15 miles a day, going through seven pairs of tennis shoes on her trek. When she got to the a roughest part of the trail in New Hampshire and Maine -- the weather dark from a hurricane that had hit the East Coast -- she slogged through rocky streams, up cliffs, and over big boulders, until she reached the summit of Mount Katahdin, the official end of the Appalachian Trail.

The national newspapers picked up on her walk and by midway, she had reporters finding her at various towns along her route, eager to write about her walk. When a reporter asked, as they often did, why she had chosen to walk the Appalachian Trail at age 67, she gave varying answers, including, "Just for the heck of it."

It was clear from her diary entries that she relished being out in the woods, the starry nights, and the sounds of nature. She also wanted to finish what she'd started, which was walking the entire Appalachian Trail, no matter the obstacles. Later, she walked the Oregon Trail for kicks, too.

A couple weeks ago, the NY Times featured an article about Facebook's Mark Zuckerberg and his resolution to run 365 miles this year, which means he's probably as physically lazy as I am, since one mile a day doesn't seem like much, except maybe to Mark and me.

I was so energized by reading about Emma's walk that I decided to run 365 miles this year, too. It seems like a small step toward more aerobic exercise, and a drop in the bucket compared to Emma Gatewood's heroic walk.

And maybe... maybe... some day I will walk a section of the Appalachian Trail. A woman can dream, can't she? 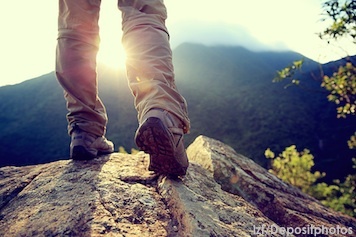 L.V. Krause is the author of Eaten Alive: the Truth About Online Dating for Women. For more articles about women, dating, and life, please visit LVKrause.com.