Filipino national Ronaldo Lopez Ulep was arrested in front of three of his children at his home in the Qatari capital, Doha, on April 7, 2010.

After being repeatedly tortured in detention and spending four years in solitary confinement, he was sentenced to life in prison in 2014 for allegedly selling information about his employer -- the Qatari Air Force. He was convicted on the basis of a "confession" he was forced to sign, even though it was written in Arabic and he could not read it. Two other Filipino nationals were convicted in the same case, one of whom is facing execution.

Ahead of Ronaldo's Appeal Court verdict this weekend, his eldest daughter, now 17, told Amnesty International about the traumatic night of her father's abduction and their family's long struggle for justice. The author's name has been changed to protect her identity.

"It started with calls from an unknown number -- my dad said he had been receiving five or six a day but he never answered them.

Then one evening, my housemate noticed a man taking pictures of us outside the house. My brother checked and saw two men in cars looking at the house. My dad told us all to pack up some stuff and go out -- we spent the night in our cars, trying to get some sleep or just roaming around.

When we got back, those stalkers had gone, although the phone calls continued. Even then, we never expected such a horrible day would come.

The next evening we were all in the living room for movie night, eating snacks, when the doorbell started ringing -- over and over again. We prayed before our housemate went outside to open the gate. After that, everything happened so fast.

They were asking for my dad, while the lady led us women into another room in the house. Before we left, I took a quick glance back and the last thing I saw was one man shaking dad's hand and asking how he was, then suddenly handcuffing him. From our room we could hear doors slamming and heavy things falling on the floor.

When the lady finally let us out, my hands were so cold I couldn't feel a thing. The rest of the house was a total mess. I looked for dad, but he was gone. They took him for no reason, with no explanation and no warrant.

We went upstairs to find his laptop and phones gone and our family picture albums scattered on the floor. They also took the savings hidden in our safe -- money my family had saved since we were young. They said they would return dad back to us after two days of questioning. They lied. We never saw him again.

I started crying and kept crying. Dad was gone and we had no one to look after us. My mom was in the Philippines on vacation with our two-year-old brother. We had to call and tell her what had happened to dad. She said we should travel to the Philippines as soon as possible.

I do not accept my father's life imprisonment. He is an innocent man who does not deserve this. Those responsible for this wrongful deed should be the ones sentenced. We will never give up fighting for the truth.

My dad is a good man and a dedicated father. He drives us wherever we want, drops us to school and picks us up. He goes to work early in the morning and gets home early. He is tall, dark and handsome. He is our dad. This is how we remember our father, even until now. Mum shows us photos of him every day and tells us stories about what he accomplished. 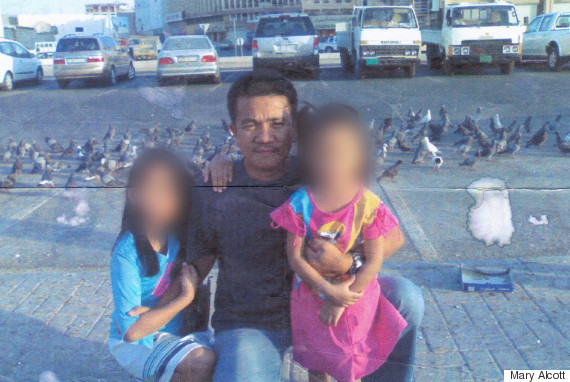 I do miss Qatar and all those memories. It's where we were born and raised and it was a good country. I just don't know what happened. We haven't seen my dad for five years and we miss him more and more. My mom tries to be strong to keep us going, but she can't be mom and dad at the same time. No one can.

My younger brother is seven now. He keeps asking when he will be able to see dad -- not only in pictures, but for real. We tell him that he is still working in Qatar. All we ever give him is hope, telling him that tomorrow, dad will be here. He waits outside to see planes passing by. He shouts "Daddy!" and it rips my heart. Whenever he sees an airplane, he notices me crying. I just tell him it's the dust getting into my eye.

My only hope is that on May 31, 2015, the Qatari authorities release my dad. I ask them to set him free at last and return what they took from us for the past five years. Those men responsible for taking him, torturing him and imprisoning him can correct their mistake now, before it's too late.

The 17-year-old daughter of Ronaldo Lopez Ulep is a recent high school graduate. She lives in the Philippines with her mother, sister and two brothers. She was 12 years old when her father was arrested by Qatari authorities. Her real name has been withheld in order to protect her identity.