When I was 9 years old, I took my parents' album of the Broadway musical Damn Yankees and memorized every syllable of Gwen Verdon's show stopper, "Who's Got the Pain When They Do the Mambo?" Once I was satisfied with my lip synching and choreography (I decided that a mambo was a dance in which young boys gyrated and flung themselves on and off the living room sofa), the number was ready for public display. 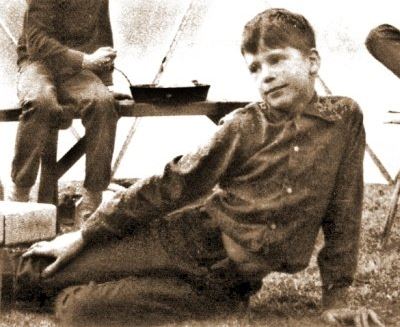 The premiere was a simple affair, exclusive and unannounced. Mrs. May from across the street had stopped in for afternoon coffee, and opportunity knocked when Mother busied herself in the kitchen for a few minutes.

Not a smart move, Mother, leaving Mark alone with the company.

The unsuspecting woman gave a polite "yes, that sounds nice," and before Mother could run interference, I had turned on the stereo and dropped the needle at the precise moment where Gwen breaks into song.

Mrs. May stared and stared, her hands folded neatly in her lap, as I brought out every sashay, twist and thrust in my dancing arsenal. My moves may have been imperfect, but I vocalized brilliantly, thanks to Gwen. As I struck my final pose, arms reaching for the heavens, frozen and triumphant, I saw Mother standing in the doorway, holding a plate of cookies and breathing heavily through her nostrils.

Future performances would be limited to my bedroom, where I could conjure an audience cheering with acclamation and mothers wouldn't put you on restriction.

It is that boy, the cheerful but feminine performer, that I always feared would creep out of me as I navigated young adulthood as a gay man. I worked to shed his characteristics, to replace every soft gesture with a wooden one, to embrace the gym and tank tops and Levi's jeans with the same fervor I once had for my beloved Broadway musicals, with mixed success.

And then, a lifetime later, as I worked for an AIDS agency in Atlanta in the '90s, destiny called. An upcoming drag contest to benefit our agency was suffering from poor participation, and my boss asked if I would consider entering.

Being a drag queen, even for a night, terrified and delighted me. But the performer in me won out, wouldn't you know, and Anita Mann was born. I created an interactive video rendition of Donna Summer's "This Time I Know It's for Real" (below) and won the contest.

Soon I was performing with "the camp drag queens of the South," The Armorettes, who hosted a Sunday-night show to raise funds for AIDS organizations. Over the years they have raised over $2 million, and their show was a sellout every week. But my own phobic notions lingered.

I would hear other gay men make disparaging remarks about drag, and I withered, unable to admit that I was playing to a packed room every Sunday. 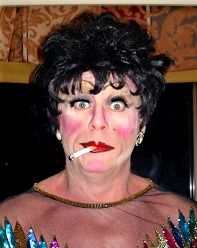 The nexus of shame and shamelessness is a complicated one. Each week I put on full display the very things about myself that I had worked so hard to reject: my femininity, my silly pursuit of acceptance through laughter and applause. And just as I gained confidence in what I was doing and why, I would lose a potential boyfriend when he learned of my weekend talents.

As a growing meth addiction encroached on my free time, I abandoned Anita Mann to its demands. Anita's dress and wig would be relegated to a duffel bag hidden in the back of the hallway closet. I had found a vocation in drugs that offered twice the shame and every bit of the need to keep quiet about it.

It took a few years before Anita would make her comeback. Armed with a TV set and a sense of the absurd, Anita performed at a sober fundraising event. Her rendition of "Don't Get Around Much Anymore" (below) grows more insane by the moment (watch out for the swinging TV set!).

And yes, I am aware that I speak of her in the third person. Maybe it is because I view her as a character I have created, and perhaps it is the remnants of shame, and of my need to keep her at a distance.

It's strange how those things about which we have drawn the most shame are also able to liberate us, not to mention help others: my HIV status; my drug addiction and recovery process; my drag personality. As I have embraced each of these, I've found self-acceptance and a way to carry a message of hope, and even joy, to others.

Meanwhile, I still struggle with the need to project as much masculinity as I can muster. I swagger more than I sashay. I sport a beard when possible. And I work to maintain a strict gym regimen.

It's important for me to stay in shape if I expect to fit in that dress.