As I surveyed the otherwise familiar Columbia quad on a fall afternoon in 2014, the mattresses caught my eye. At least ten students awkwardly lugged around standard-issue dormitory extra-long twins, some scrawled with denunciations of sexual violence and signatures of support. These students acted in solidarity with Emma Sulkowicz, a fourth-year student who had reported being "raped in her own bed" the first day of her sophomore year and who turned her senior project into a performance-art protest against both sexual violence and the university for its mishandling of her case. Amidst widespread media coverage, Sulkowicz has vowed to carry around her fifty-pound mattress until her alleged rapist, Jean-Paul Nungesser, named publicly by the Columbia Spectator, is expelled. 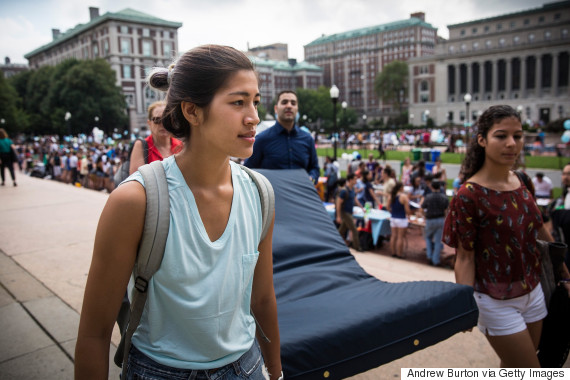 Exiting campus, I passed hulking St. Luke's Hospital and remembered the several hours I had spent there during my own Columbia freshman orientation, back in 1996. I had awoken in the middle of the night pinned to my bunk bed by a man who breathed hotly on my face, and in what I will always recall as a uniquely menacing whisper, promised we would "do it again soon." Disoriented, I somehow convinced him to leave. When I switched on the light, I saw he had removed the cords from my telephone, stolen my keys and brand-new student ID, and, most troublingly, left a pair of men's shorts behind. So at the advice of my floor's inexperienced Resident Advisor, I found myself at St. Luke's, legs splayed open undergoing a rape kit. The nurse confirmed that "nothing had happened," and I embarked on my freshman year on exactly that premise: NOTHING HAPPENED. I ignored the dean's nervous voicemails inviting me to "chat over tea" and told no one on the Spectator, where I hoped to build recognition as a writer rather than a victim, especially as it reported on sexual violence more frequently.

I was accompanied on that stroll this fall by another alumna, whom I'll call Rachel Cohen, who graduated from Barnard in 1969 (Columbia remained all-male until 1982), and who recalled her own experience of campus sexual violence, nearly fifty years before Sulkowicz became a cause célèbre. An activist, Cohen had hosted a dinner at her dorm and connected with one guest, "a soft-spoken" member of the radical, anti-establishment Students for a Democratic Society. This young man had invited her to visit him at his room on campus, where he overpowered her repeated refusals to have sex, then beseeched her "not to be angry." Back in New York, Cohen located a gynecologist who administered emergency contraception. Shaken, Cohen returned to Barnard, where for a time she redefined her rapist as her boyfriend, "because," she explained to me, "if we were dating, then what happened between us was OK. I was no longer a victim." Cohen didn't share her experience with friends or authorities, and only years later, after she became a feminist, recognized the act as rape and learned that the same man had attempted to coerce a close friend.

So what can the experiences of these three young women, which span over fifty years, teach us? The natural temptation is to assess "progress," but the historian's lens of change-over-time is more appropriate. As imperfect as any individual examples -- especially those of three heterosexual women on an elite campus -- are to assert grand conclusions, these instances help illuminate transformations and continuities in how Americans experience, think, and talk about sex and violence on campuses across the United States, where an estimated 20-25% of college women experience sexual assault. First, the legal and cultural definition of rape has expanded to encompass far more than forcible penetration by a stranger. Secondly, the sexual culture at large, as well as how students expect the institution to regulate it, has transformed. Finally, for all this change, the continuities are most instructive.

It is a result of recent transformations that allows these disparate events to be linked to one another. Today, the idea of a "rape culture" -- first elaborated by radical feminists such as Susan Brownmiller in the mid-1970s -- has entered common parlance, expanding the understanding of "rape" beyond an instance of coercive intercourse between strangers to include the social hierarchies that enable multiple forms of sexual aggression to occur. In 1968, when Cohen was attacked, the concept of "date rape" did not yet exist. Only when the anti-rape feminist movement coined the term over a decade later did Cohen's understanding of her experience evolve.

Even in the vastly different historical moment of the mid-1990s, I never wrote or spoke publicly about my own experience because I also did not understand where to place it. I enthusiastically embraced the nurse's definitive pronouncement that "nothing had happened," both because it was objectively true by the definition of sexual violence to which I subscribed (namely: penetrative sex) and because it gelled with my self-image as someone to whom such things -- things that made me a victim -- simply did not occur. At the same time, I knew that something irreversible had occurred, regardless of the rape kit's verdict: I had learned that my gender made me vulnerable, even in my own bed.

Sulkowicz' allegation is of rape, but her case is regularly linked to two other allegations of Nungesser's sexual misconduct: groping one student at a party and sexually and emotionally abusing another during a courtship. His guilt notwithstanding, the fact that groping and "intimate partner violence" now constitute actionable sexual misconduct indicates a significant change in the social construction of sexual violence over the past two decades.

How each of us engaged Columbia also reveals a meaningful shift. In the 1960s, students (like Cohen) had protested campus regulations such as curfews and parietal rules for unfairly constraining and casting moral judgment on their private lives. Such resistance helped dismantle the in loco parentis function of higher education, a change which makes such interventions feel practically quaint today. Still, though the sexual revolution flourished on college campuses, the ideal of female chastity endured; Cohen recalls her ambivalence about admitting she was sexually active, though most college women were engaging in sexual activity. Between this uncertainty and the continued paternalism of higher education, Cohen never sought support from authorities on her own campus or at Columbia where her rape occurred. "Who was I supposed to ask," she reflected, "the campus doctor who famously claimed the best pill was an aspirin held tightly between the knees?"

By the 1990s, the terrain had shifted dramatically. Even as I did not yet define myself as a feminist (and was mostly unaware of the flourishing campus anti-rape movement that coincided with my time there), the decision to tell the Resident Advisor what happened was instinctual. I had just attended a session on sexual consent at orientation. Such institutional initiatives were becoming common, even as they were scorned by a Saturday Night Live skit about the excesses of political correctness. My friends and I scoffed at the session -- a forerunner of today's "affirmative consent" policies -- as irrelevant to the invincible "cool girls" we aspired to be, but the idea that the institution was there to protect us was so assumed we could mock it. If I had any worries about Columbia's response to my experience, it was that it would "become too big of a deal."

In the space of a half-century, advocating for sexual justice has changed from fighting to keep the university out of students' intimate lives to assuming, even demanding, it regulate them more closely, and not only at Columbia. Core to Sulkowicz' complaint (filed with 28 others) is Columbia's mishandling of her process; she has filed charges with the Department of Education rather than criminal complaint. Tellingly, in a recent New York Times profile, Nungesser too derides the institution's response, claiming Columbia's responsibility to contain the "mob justice" Sulkowicz has created. This arc suggests a rupture between issues on which college women have largely triumphed since Cohen's day -- greater success in educational and professional arenas -- and those which prove persistently vexing: questions of sexual autonomy and reproductive justice.

The continuities these three stories reveal are most arresting. Sexual violence has been a consistent facet of college women's experiences for far longer than the lifespan of the movements that first defined and now fight to eradicate it. At Columbia, a leader in such activism, the first Take Back the Night demonstration occurred in 1988 - twenty years after Cohen's attack. Equally enduring, however, are the efforts of women to transform their victimization into empowerment on their own terms, terms that have transformed in the last fifty years. To end this perverse rite of passage for college women, we must interrogate the troubling history of campus sexual violence in order to transform the future.

Natalia Mehlman Petrzela is Assistant Professor of History at The New School in New York City. She is the author of Classroom Wars: Language, Sex, and the Creation of Modern Political Culture (Oxford University Press, 2015) and her writing has appeared in various scholarly journals and popular media such as The New York Times and Slate. Her new research focuses on the emergence of wellness culture in the postwar United States. She tweets from @nataliapetrzela.

I Was Assaulted on Campus 20 Years Ago, and I'm Still 'Carrying That Weight'
Surviving In Numbers: Stories Of Sexual Assault Survivors