Imagine: You're having lunch and a contractor knocks on your door. He has extra driveway sealant left over from a job around the corner and offers it to you at a discount. Your driveway could use a refresh, so you agree. He "seals" your driveway, and then one rainfall later, it washes away. Clearly, that wasn't leftover sealant, and you just spent hundreds of dollars on what was essentially watered-down black paint. 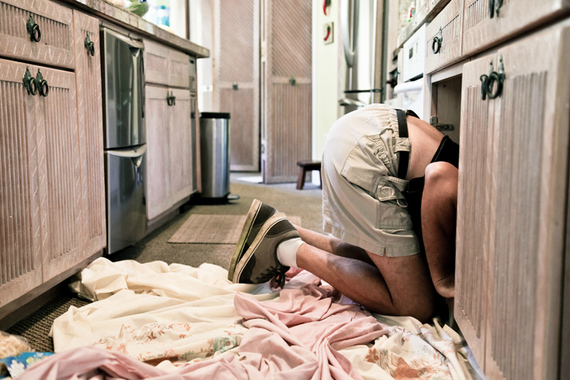 Unfortunately, it's not unusual for homeowners from Boca Raton, FL to Seattle, WA to find themselves in a similar predicament. Because of the nature of home repair work, horror stories are more commonplace than you might think: If you're often running off word-of-mouth recommendations, there's no paper trail, and it's frequently one person's word against another's.

But there are steps you can take to avoid entering a work agreement with shady repairmen and contractors. "There is a difference between a scammer and substandard work," explains Katherine Hutt, a spokesperson for the Better Business Bureau (BBB). "Scammers will take off with your money without ever completing the job, while substandard work is just that: substandard."

To avoid encountering either, heed these words of advice to avoid contractor fraud and being a home repair scam victim.

Rule 1: Always have a contract
Sure, maybe you're an honest, legitimate, my-word-is-my-bond type of person. But let's face it: there are plenty of people out there who aren't. That's all the more reason a written contract is recommended -- preferably not written on a napkin or scrap piece of paper -- regardless of how many friends, family members, or co-workers swear by a contractor's work. "Verbal agreements do not supersede a written contract," explains Hutt. "Make sure it's in writing."

No contract? You risk an experience like Vicki Glembock's. The Westmont, NJ, homeowner skipped the contract and hired a neighborhood handyman to shave off the bottom of a cabinet to make room for a larger fridge. "He came, took the cabinets down, and left with them to do the work in his shop," Glembock explains. "A month went by. I called him, and he said he needed to take another measurement, came back, and then left. Again, nothing for a month. Finally, I called again, and within a day or two, I came home one day to find the cabinet sitting on our front porch. He had cut off the bottom in such a way that we couldn't attach doors. So he just left it there. No note. No mea culpa. Nothing. I ended up fixing them myself and buying new doors."

Rule 2: Research your contractor
Afton Campbell, a Charlotte, NC-based mom of three, thought she had done her homework. "I interviewed six other contractors, and each one seemed a little 'shady,'" she says. "I reached out to the real estate agent that lives in our neighborhood, and his marketing director, for a recommendation. They both said 'Mr. L' had done some jobs for other people they knew and they were happy with his work. He seemed very knowledgeable and trustworthy. He also had the best plan of action for repairing our shower, and his price was very reasonable. He asked for half of the money upfront and the rest when the job was complete. Everything seemed legit." Until it wasn't. Fast-forward several months: The homeowner's "simple" shower tile repair had been completely botched. Campbell was shocked: "He didn't even cut the tiles with a wet saw!"

Beyond asking for recommendations from friends and neighbors, always dig a bit deeper when it comes to finding a reputable repairman. "Check BBB.org to see what others have experienced with the company," advises Hutt. "We have 5.3 million business reviews, and over 1 million are in the home space. You can see if they have a BBB rating, if they're an accredited BBB business, what licensing is required for that particular profession, and see if there are any customer reviews about the company."

Rule 3: Get at least three in-home estimates
If a contractor doesn't want to see a potential project in person before giving you an estimate, that should be a red flag. "It's almost impossible to do something over the phone," says Hutt. "If a company isn't willing to come out to give an in-home estimate, you probably want to keep looking." On that same note, "don't automatically go with the lowest estimate. Closely compare that you're getting the best deal." Oftentimes the highest quote doesn't necessarily ensure the best work, and the lowest estimate isn't necessarily the best deal.

For Dani in Richmond, VA (who asked that her last name not be used in this story), getting three in-person estimates wasn't an option for her family's beach home on North Carolina's Outer Banks. "We got a call from our rental agency saying that our house had mold and that the renters were going to have to be moved out," she says. "So my husband drove down, and because his background is in hazardous materials, he decided to check it out himself. Turns out, there was no mold anywhere. The repairman's response was, 'Oh geez, where did all the mold go?' after my husband showed him there wasn't any in the attic. Turns out, he wasn't planning on the homeowner showing up and calling his bluff." Luckily, Dani and her family avoided what could have been an unnecessary $20,000 repair -- but it did cost them an unexpected trip to their beach house.

Rule 4: Don't pay in full upfront
"No reputable contractor or repairman will ask you to pay everything in full before the job even starts," explains Hutt. "Think of it in thirds: Pay one-third upfront, one-third when the job is substantially complete, and the last one-third when it's done." Luckily, Afton Campbell had paid her contractor only a fraction of the total cost of the bathroom renovation, saving her family money in the long run. "He's still giving me a hard time and making excuses as to why he can't refund us our money," she says.

And, Hutt warns, getting a refund could be a problem if there were subcontractors involved. "Make sure all of the subcontractors have been paid," Hutt advises. "If the contractor doesn't pay them, they can come after the homeowner for the unpaid wages." To help prevent this from happening to you, before work begins, ask the general contractor to list every subcontractor, how much they'll be paid, when they're estimated to be paid, and, finally, for proof that they've been paid.

Rule 5: Use resources like the Better Business Bureau
These organizations exist for a reason. Besides supporting businesses that are in good standing and providing great services to their customers and community, the BBB also keeps track of businesses that don't do those things. "Even if you can't find a business in our directory, you can contact us and request that we open a review," says Hutt. But the BBB is just one way to ensure you're making a good choice when hiring a general contractor. You can also use websites like Angie's List to help vet your choices, ask for references (and call them!), call the general contractor's insurance companies to verify that coverage is current, and ask to visit a current job site to see a contractor's work up close.

What's your home repair horror story? Share your tips and experiences in the comments!