"Nine dollars per hour... I need the money... I can handle this." I couldn't handle it. Imagine going into work every day living in fear, never knowing what would come out of someone's mouth.

I started my new job at the end of October, and my excitement was inevitable due to the fact that I could finally get back to work after my surgery. I loved going to work, which is surprising for a 17-year-old to say, but I had a goal to be able to work at full capacity and I knew I was ready. All was normal, up until December.

I noticed a person in my workplace was a little... "off" so to speak, but I thought nothing of it. I'm generally never phased by weird things -- and me being the person I am, came to embrace it. Flash forward to a week or so before Christmas, we were having an event for free Santa photos for the holiday season. I ended up volunteering to play Santa because our original Santa backed out last second, and nobody else wanted to do it, so I felt awful and did it for the children. This is when it started becoming a little weird. As I was getting ready to play Santa -- me, being as tiny as I was -- had to be stuffed with numerous sweaters, but during that, the same person who gave me such a weird vibe ended up saying to me repeatedly, "I'm not feeling you up." Let me mention, he is about eight to 10 years older than me. I got a little creeped out, but I let this one slide.

Weeks went on, and this person kept getting creepier. Whether comments like "the front of the this place smells like a bloody tampon" or "Let's make out!... just kidding you're a minor," and constantly mentioning that I was indeed a minor. I was way too nervous to mention this to anybody, or tell the person to stop because of how timid I am, and how obnoxious the person is. I regret not telling anybody. About a month after random comments like that, the worst came. He said, "How do you have sex with your tube?" "PLEASE DON'T REPORT ME FOR SEXUAL HARASSMENT" or something to that extent, and that's when I cracked. I had a massive anxiety attack on the inside, and tried acting cool, but I was internally screaming. I just got the surgery in June for my disability, and obviously I am still going to be insecure with how my body is now, since I have that plastic part out of my lower left side. Weirder comments came, like the person saying which lube they bought before, and I just couldn't take it anymore.

I tried playing it off as fine for a couple of days, but I noticed every time I heard their voice, I would panic. Before school I made my normal pit stop there, saying hi to a couple of co-workers, grabbing my daily muffin and Mountain Dew, but then I heard their voice over the intercom, and immediately ran to the register, rushed out of there and started crying. I couldn't do it anymore. How could I face the person while acting like nothing happened? I'm a new employee, the person has been there forever, why would they believe me? With no evidence? How could I do anything? That Thursday I became brave... I ended up calling their sexual harassment hotline.

So far, they are investigating the whole situation, but here is my message for people: Do not let things slide like I did. Even if you are fearful, such as I was, or even think nothing will get done. It is a serious matter, and people will take you seriously. Yes, I am still traumatized from this whole event, but I am recovering. I am speaking to my local rape and sexual harassment clinic, getting advice on what to do legally to the person, and have someone to express my feelings to about it. There is always an answer for things like this, even if you feel useless.

There is a program called RAINN, which stands for rape, abuse and incest national network, which has a hotline at the number 1-800-656-HOPE. It is free, 24 hours and seven days a week, which hooked me up with my local board of help here in Massachusetts. They genuinely care about you, and will help you every step of the way. Even if you don't feel comfortable talking to someone on the phone, they have an anonymous chat, with a counselor who can help you any time of the day.

Remember, anyone could be a victim. Do not feel like you are the only one, you have people to help you. There is hope.

PHOTO GALLERY
Tales Of Sexual Harassment At Work
Download
Calling all HuffPost superfans!
Sign up for membership to become a founding member and help shape HuffPost's next chapter
Join HuffPost 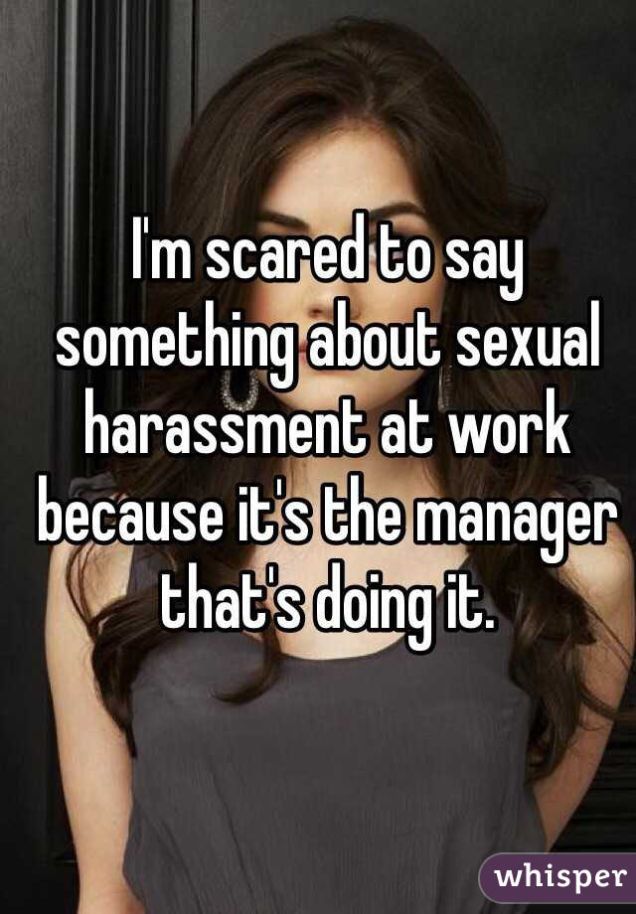