Last Sunday evening I attended the San Francisco fundraiser that has been the center of recent political jousting. The next day, when asked about the talk Obama delivered, I too commented about his answer to a question he was asked about Pennsylvania. Over the past week, though, I have had a Rashomon-like experience concerning those remarks.

Clinton, McCain, and media pundits have parsed a blogger's audio tape of Obama's remarks and criticized a sentence or two characterizing some parts of Pennsylvania and the attitudes of some Pennsylvanians. In context and in person, Senator Obama's remarks about Pennsylvania voters left an impression diametrically opposed to that being trumpeted by his competitor's campaigns.

At the end of Obama's remarks standing between two rooms of guests -- the fourth appearance in California after traveling earlier in the day from Montana -- a questioner asked, "some of us are going to Pennsylvania to campaign for you. What should we be telling the voters we encounter?"

Instead he urged the volunteer to tell Pennsylvania voters he encountered that Obama's campaign is about something more than programs and talking points. It was at this point that Obama began to talk about addressing the bitter feelings that many in some rural communities in Pennsylvania have about being brushed aside in the wake of the global economy. Senator Obama appeared to theorize, perhaps improvidently given the coverage this week, that some of the people in those communities take refuge in political concerns about guns, religion and immigration. But what has not so far been reported is that those statements preceded and were joined with additional observations that black youth in urban areas are told they are no longer "relevant" in the global economy and, feeling marginalized, they engage in destructive behavior. Unlike the week's commentators who have seized upon the remarks about "bitter feelings" in some depressed communities in Pennsylvania, I gleaned a different meaning from the entire answer.

First, I noted immediately how dismissive his answer had been about "talking points" and ten point programs and how he used the question to urge the future volunteer to put forward a larger message central to his campaign. That pivot, I thought, was remarkable and unique. Rather than his seizing the opportunity to recite stump-worn talking points at that time to the audience -- as I believe Senator Clinton, Senator McCain and most other more conventional (or more disciplined) politicians at such an appearance might do -- Senator Obama took a different political course in that moment, one that symbolizes important differences about his candidacy.

The response that followed sounded unscripted, in the moment, as if he were really trying to answer a question with intelligent conversation that explained more about what was going on in the Pennsylvania communities than what was germane to his political agenda. I had never heard him or any politician ever give such insightful, analytical responses. The statements were neither didactic nor contrived to convince. They were simply hypotheses (not unlike the kind made by de Tocqueville three centuries ago ) offered by an observer familiar with American communities. And that kind of thoughtfulness was quite unexpected in the middle of a political event. In my view, the way he answered the question was more important than the sociological accuracy or the cause and effect hypotheses contained in the answer. It was a moment of authenticity demonstrating informed intelligence, and the speaker's desire to have the audience join him in a deeper understanding of American politics.

There has been little or no reaction to the part of the answer that was addressed to the hopelessness of inner city youth who have been rendered "irrelevant" to the global economy. No one has seized upon those words as "talking down" to the inner city youth whose plight he was addressing. If extracted from an audio tape HuffPost Blogger Fowler, those remarks could (and may yet) be taken out of context as "Obama excuses alienation and violence by urban youth." But in context, Senator Obama's response sounded like empathetic conclusions and opinions of a keen observer: more like Margaret Mead than Machiavelli.

As the week's firestorm evolved over these remarks at which I was an accidental observer, I have reflected upon the regrettable irony that has emerged from Senator Obama's response to a friendly question: no good effort at intelligent analysis, candor -- and what I heard as an attempt to convey a profound understanding of both what people feel and why they feel it - goes unpunished. Such insights by a political candidate might otherwise be valued. In a national campaign subject to opposition research, his analytical musing has instead created an immense amount of political flak.

Now and "in this time," to invoke one of the candidate's favorite riffs, such observations and remarks shared among supporters are just a push of a record button on a tape recorder away from being spread across the internet to be dissected by political nabobs. What struck me immediately after the fundraiser as so refreshing turned out to be a moment Senator Obama is forced to regret. Today we marvel at de Tocqueville insights about American communities. Apparently, such commentary is valued as long as it is three centuries old and doesn't come from the mouth of a contemporary observer who might be elected president.

So much for the political ironies. But there is one more personal observation that was missed.

I happened to be on the balcony when Senator Obama's vehicles arrived and he emerged from the Secret Service SUV. Obama shouted the friendly greeting "How are you guys up there doing?" to the group of us looking down from the balcony and then said, "You have to excuse me, I need to call my kids in Chicago now." 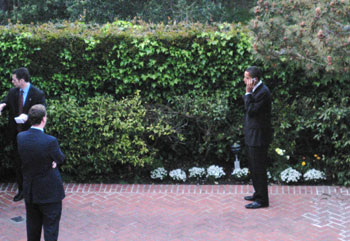 All of us stood and watched the leading candidate for the Democratic party nomination for president have a short conversation with his kids before he entered a fundraiser to make his remarks.

No tape of that conversation has emerged as yet. Who knows how casual remarks of a father to his children or his wife on a cell phone could be spun to support the argument that as a father speaking to his kids two time zones away before they go to bed, his comments sounded as if he "looked down" upon them. Given his relative height and the age of his kids, he probably does. But that would be precisely as relevant to his capacity to unite and lead this country as were the remarks at the fundraiser that have been so deconstructed over this past week.