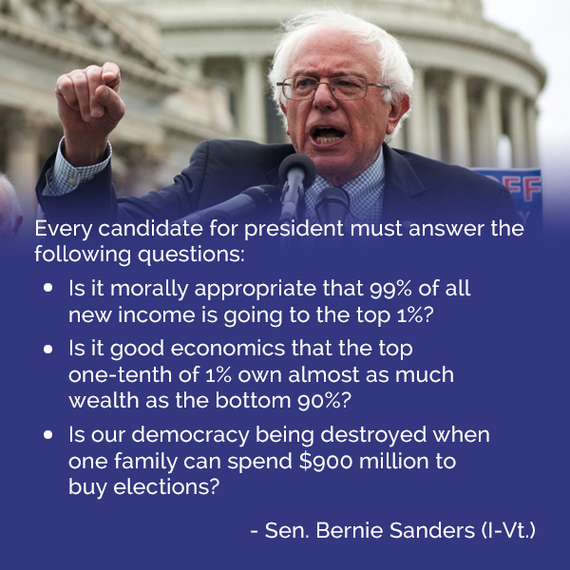 In my initial disappointment at Elizabeth Warren's refusal to challenge Hillary Clinton's coronation as the nominee in the Democratic primary, I was too quick, writing in these pages, to dismiss Sanders' campaign as marginal. I was mistaken.

So let's forget about Donald Trump and the Republican debate clown show for a minute and focus on the Democrats.

Bernie Sanders has garnered crowds of 10,000 supporters plus, raised over $15 million in small donor contributions, attracted over 100,000 people to organizing house parties, and is polling within 10 points of Hillary Clinton in the key early battleground states of Iowa and New Hampshire.

It's enough to put a good scare into the Clinton campaign and Democratic insiders like Barney Frank who think Hillary should get a free pass to the nomination.

And whether or not Bernie ultimately wins the Democratic nomination, he is accomplishing two important goals.

First, he is putting some key progressive policies front and center in the debate in contrast to the "moderate" policies of mainstream Democrats, the Obama administration, and Hillary Clinton.

• Medicare-For-All vs. the weak tea of the Affordable Care Act.

• Free higher education at a public university for everyone who's academically qualified paid for by a tax on Wall Street, not just lower interest rates on student loans.

• Breaking up the big banks that tanked the economy in 2008, not just regulating them with revolving door regulators as they grow even bigger and more powerful.

• Reinstating the Glass-Steagall Act which separated government insured commercial banking from speculative investment banking, not just putting limited regulations on these practices as under Dodd-Frank.

• A carbon tax, which is a simple way to limit greenhouse gases, while pricing the cost into their production, rather than complicated "market-based" compromises like cap and trade advocated by so many Democrats.

These and other proposals from the Sanders campaign are supported by large numbers of Americans but they are a bridge too for most corporate Democrats and have been largely absent from debate in the Democratic Party.

For better or worse, Presidential campaigns are one of the few events in which major policy proposals get a certain amount of coverage in the mainstream media. So if Sanders' does nothing but heighten public awareness these kind of policies, then his campaign will have been a good thing.

Even if these policies are not immediately passed, progressive change often takes time from the first moment ideas are proposed until ultimately enacted. This was true in the early 20th Century for the minimum wage and child labor protections, during the depression for unemployment and social security, and during the '60s with Medicare, Medicaid, and the Civil Rights and Voting Rights Acts.

And often these progressive reforms are first proposed by the socialist left before ultimately being accepted by the mainstream.

The second reason that the Sanders campaign is a good thing for America is that it's restoring "socialism" to a respectable place in American politics.

For half a century, liberals and progressives were terrified of being tarred with the term "socialist" because it was associated with America's Cold War enemies and political repression in countries like the Soviet Union and China. As a result, the word "socialist" became verboten in American politics.

Although discussions of democratic socialism have been virtually unheard for decades, Americans are increasingly open to the idea . A recent Gallup poll found that 47% of Americans would vote for a socialist for President if their party nominated one, while 50% said they would not. Compare that to Hillary Clinton's most recent polling of 37% Favorable to 48% Unfavorable (-11%); Jeb Bush's 26% Favorable to 40% Unfavorable; or Donald Trump's 26% Favorable to 56% Unfavorable (-30%). Of Millennials--who lived through the 2008 crash but not the Cold War--36% view socialism favorably and 39% view capitalism favorably, a near tie.

Even though an avowed socialist has never been President (unlike in Western Europe where socialist Presidents and Prime Ministers are common), socialists (and even, despite their blind spot to political repression, those who've passed through communism) have had a profound impact on the policies that have made America a better place.

Socialists Eugene Debs and Norman Thomas ran for President as independents, garnering millions of votes, and their ideas influenced progressives like Teddy Roosevelt, Woodrow Wilson, and FDR. Socialist W.E.B. DuBois founded the NAACP and made a profound impact on the growth of the civil rights movement. Socialist Walter Reuther helped form and lead the United Auto Workers. Socialist Michael Harrington wrote the book "The Other America" about poverty in America in the '60s which influenced JFK and LBJ to commence a War on Poverty and pass Medicare and Medicaid. Socialist Martin Luther King spent the last years before his assassination advocating for greater economic justice.

When I'm wrong, I have no trouble owning up to it. And I was wrong to dismiss Bernie Sanders' Presidential campaign. By raising key policy proposals that no mainstream Democrat will raise, and by restoring socialism to a respected place in the political debate, he is doing the nation a great service. And as his numbers in the polls keep rising, he may even give Hillary a good run for her money.

Barney Frank is also wrong to dismiss Sanders' campaign but for opposite reasons. Writing in Politico, expresses fear that Hillary Clinton's candidacy is so fragile that any serious primary challenge to her coronation as the Democratic nominee could lead to her being defeated by whomever the Republicans throw up against her in the general election.

Frank's argument typify everything that's wrong with mainstream Democrats. First, they think they're entitled to their way without the annoyance of having to deal with actual voters or the activist base of the party. But there's a gap between the views of the Warren/Sanders wing and the Clinton/Obama/Wall Street wing and where better than in the primaries to air those views? It's the attitude that Hillary Clinton is somehow entitled to the nomination unchallenged that diminishes the enthusiasm of the base, who are the people who volunteer for campaigns and are the heart of small-dollar donors.

Second, if Hillary is so vulnerable that a primary challenge could lead to her defeat in the general election, there's something seriously wrong with Clinton as a candidate, and Democrats should be profoundly worried about anointing her.

Third, Frank is just wrong that Hillary is an authentic progressive. He writes, "A prolonged prenomination debate about the authenticity of Clinton's support for progressive policy stances will do us more harm than good... Without any substance, some argue that she has been insufficiently committed to economic and social reform--for example, that she is too close to Wall Street, and consequently soft on financial regulation...This is wholly without basis."

Wrong!! It has plenty of basis. The major achievements of the Clinton administration in the area of financial reform was to repeal Glass-Steagall and to ban the government from regulating derivatives. Since leaving office, the Clintons have earned over $100 million dollars in speaking fees, at $200,000-$500,000 per hour, largely to financial institutions like Goldman Sachs and Citigroup. Though the press is generally barred from these events, I doubt that the Clintons convey hundreds of thousands of dollars an hour of wisdom to these Wall Street behemoths. More realistically, they're paying them for services rendered and to be rendered. And who can forget Hilary's vote for the Iraq war?

The Presidential primaries are exactly the place to openly debate these issues. Barney Frank is wrong to try to shut down the debate. If Hillary Clinton is the Democratic nominee, I'll reluctantly vote for her over any conceivable Republican nominee. But the choice to support the "lesser of two evils" is for the general election, not the primaries.

I admit I was wrong to dismiss Bernie Sanders' candidacy. Barney Frank should admit he was wrong, too. Run, Bernie, Run.