My doctor tapped me on the shoulder and said, "Ashley, it's a boy. It's Jerry."

I know now that should have felt like a defining moment in my life. And in many, many ways, it was. Truly, everything changed that instant. But in that moment, I mostly wondered where I was and how long had passed since I last closed my eyes. And, being even more honest, I didn't want to be awake yet.

Seventeen hours of labor. Two and a half of it spent pushing. I was exhausted. To say that I felt like I had been run over by a truck would have been a vast understatement.

I was wheeled back to my room. I would have been more on edge at the thought of meeting my child for the first time, but I wasn't capable of it yet. I was too concerned with how different my body already felt, worrying if I would ever feel like myself again.

I closed my eyes as they wheeled me down the final stretch of beige hallway before turning my bed into our room. It was then that I heard him.

The wheels on my gurney locked into place, and before I could get my bearings and visually scan the room, my husband was at my side with what appeared at first to be a bundle of blankets. A tiny head poked out, adorned with a blue and pink striped, knit hat.

I took my first look at him, and a sigh of relief escaped my tired body: he was perfect.

Really, I know that all parents say that so it may not mean much to you. But to me, to us, it was a relief. His birth had been rocky for a spell. And, of course, any parent always fears that they will pass on their worst traits to their children. I could only think of my large nose and feet, and my skin's unyielding propensity to burn whenever I was in the sun for more than 15 minutes.

I loved him right then.

Until we got home.

By all accounts, on a scale of one being an angel and 10 being Satan's spawn, my son was a solid one. He ate. He slept. He filled his diapers. Then he went back to sleep. He smiled when he was old enough. He snuggled. He was sleeping through most of the night when he was about four months old.

The problem was with me.

Motherhood was an assault on my life. I thought that all of the pieces would seamlessly click into place once my baby came. That when I saw him or her, the slate would be wiped clean, and I would be new. In many ways, I was. There is no greater beginning than at the very beginning, for each of us. There is no greater motivation than that of a child.

But, I found myself battling my emotions. I felt lonely. And I felt like a failure for feeling like I did. I watched other mothers around me connect with their newborns, seeming to love every moment.

I loved my son, but I was too caught up both with myself and the vast changes I was going through, and in my own worry that I would never get it right. I was too preoccupied to fall in love.

I loved him when I first saw him beneath that mound of blankets in my husband's arms. But I wasn't in love with him yet. I may have thought I was, but time has proven me wrong. I didn't know him yet. And I did not know the endless bounty that is parenting.

I would tell any mother now, six years later, not to beat herself up with guilt for not feeling the pleasantries in the early stages of parenting. For not enjoying "every moment" right away. For some of us, it just takes time. Because you have to train your eyes to see.

I was caught up with my lack of sleep, the scar across my stomach and the aches and adjustments of breastfeeding. My eyes had not been trained yet. They only saw inconvenience after inconvenience. The repetitive, day-to-day life kind of stuff that make a person go mad. They only saw the micro, instead of the macro. They didn't see the ethereal tug each day held, gently calling me to see something more than the mess and chaos. Now, three children later, my eyes are more adept at seeing.

Children holding hands without provocation. Smiling faces in the backseat. Tiny, fuzzy heads and sleepy faces, first thing in the morning. Kisses that leave a ring of chocolate milk on my cheek.

I see so much more now. I'm ready to see more now. I choose to see it, to see them.

I loved him then. I love them all now. 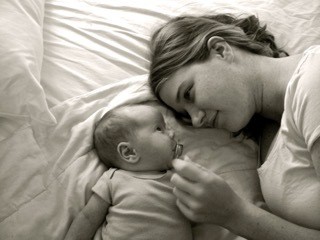 This blog post is part of a series for HuffPost Love Matters, entitled 'Moment I Fell in Love With My Baby.' To see all the other posts in the series, click here. To contribute, submit your 500 - 800 word blogpost to lovematters@huffingtonpost.com.