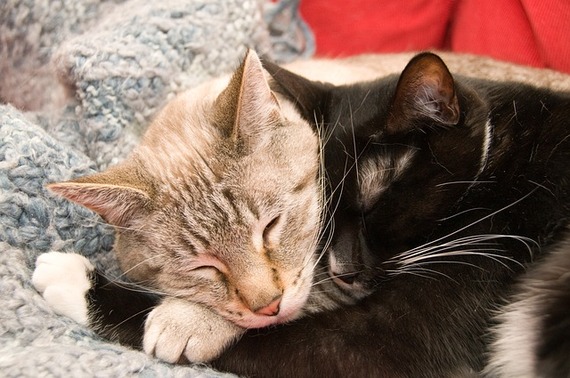 A “cuddle party,” however, is a strange, mysterious beast of its own. You’re not there to get laid. You’re there to cuddle -- to receive the glorious high of oxytocins from a complete group of strangers. There’s nothing sexual about it, which in some ways makes it even weirder than just going up to someone and saying, “Hey, wanna screw?”

Cuddle parties are taking over the world. They’re being held everywhere from Utah to Canada to Australia. Along the same lines, “cuddle shops” are opening up in places like North Carolina, Maryland and Oregon where you can pay to spoon with strangers. In today’s touch-depraved society, people are willing to pay money for this kind of thing.

The party was attended by about 30 people: men and women, young and old and of different shapes and sizes. We were all wearing pajamas, making it the most surreal slumber party I’d ever been to.

Before the party began, I tried to ease the tension by having a friendly conversation with the man standing next to me. Let’s call him Tom. “So what brings you to a cuddle party?” I asked.

“Well, you know, stress,” Tom responded with a sigh.

I could tell that Tom and I were really hitting it off. I made a mental note to ask him for a cuddle later in the evening.

Moments later, Monique went over the cuddle party rules with us. It was very Fight Club, now that I think about it: You have to give permission before you can let someone cuddle with you, and nobody can randomly start squeezing you like a victimized teddy bear. Unfortunately for me, there was no rule about cuddling the first-timers.

But it was still too early to be disappointed. At this point in the party, my ego was still firmly intact. I’m only five-foot-three, tiny and adorable, I thought, the most popular kid at the cuddle party. Everybody would be lining up, begging me for cuddles. That's not quite how it went.

After a few icebreaker activities, Monique turned on some New Age music and the party began. I looked around the room: People who had only just met were now tenderly embracing each other’s bodies. Some were giving each other massages. Nearly everybody had found a partner within moments.

Me, I sat in the corner with a goofy grin on my face. Nobody was asking to cuddle with me. Damn it, I thought. Do they not see me sitting right here?

Quickly, I turned to another man who wasn’t cuddling with anyone. I’ll call him Larry. I didn’t want to touch Larry, and I didn’t want him to touch me. But, at least, I wanted someone to chat with. “So... Did you see the Mad Men series finale?” I asked.

After a few minutes of terribly awkward small talk (yes, he'd seen Mad Men; no, he didn't want to discuss it), Larry abruptly said, “I’m going to go somewhere else now.” He went to the other side of the room and found a girl to rub his back.

Things were not going well for me. I felt like I was back in high school, when nobody would sit with me at lunch. Luckily, I saw that my old pal Tom wasn’t cuddling with anyone at the moment. Thank god for Tom, a friend I could rely on! If no one else, Tom would cuddle with me. I walked over to this grown, adult man, and asked, “Can we cuddle together?”

With apologetic eyes, Tom looked at me and said, “No.”

My heart broke. “That’s fine,” I said. “That’s totally fine.” I felt an ugly mix of rejection and embarrassment. If I didn’t have Tom, I had no one.

I wish I could say the evening ended up taking a turn for the better. It didn't. Three hours went by without a single person asking me to cuddle. What I did get out of the party, though, were some pretty great massages -- I asked one or two people to rub my back, and they were happy to oblige. (Though they might’ve been doing it out of pity.) I spent most of the night staring into space.

When the party ended, my fellow cuddle club members were crying and hugging. A euphoric state of bliss had entered the room, and everybody felt it but me. They were exchanging phone numbers and Facebook information; they wanted to cuddle again.

“I came out feeling very at peace and comfortable and relaxed in my body,” one attendee told me. “My body feels at peace. Not just my mind, but my body.”

Why did everyone have a great time at the cuddle party but me? Maybe I should’ve gotten drunk beforehand. Maybe I’m not as adorable as I think I am. Maybe, as a reporter -- a tourist in this world -- I was giving off the wrong energy.

My bad night not withstanding, I do believe there's something beautiful about cuddle parties. Monique told me she’s facilitated parties where people have met and later gotten married. She’s even writing a book about how cuddle parties have changed her life, out this fall.