Being one with nature is not on my list of top skills, but I applied for the Wildacres Writing Residency Program in January anyway. Desperate for a quiet space to finish my book, the concept of sitting in a cabin with no wifi sounded adventurous, a mini Wild meets Eat Pray Love except with a swarthy protagonist. There I'd be in an oversized gown and a nutty necklace and I'd write this genius piece of work.

I got the yes in mid-March. I bought that oversized gown. I got the necklace with the stone meant to inspire creativity from a street merchant in Asheville. I was ready. At least I thought I was ready.

This is my tale from August 31-September 6, including talks around the lunch/dinner table with my two fellow residents, encaustic artist Bridget Benton and herbalist Maria Narf. 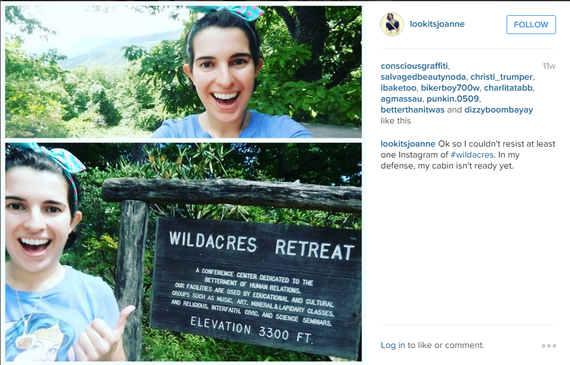 Day 1: Drove around and up the mountain like it was a vanilla swirl ice cream cone. Sat in a rocking chair at the lodge. It was supposed to be a tranquil moment. The four cleaning ladies of Wildacres rambling in and out of the lodge with paper towels and Windex and cigarettes had other plans. I was treated to an hour-long reimagining of Steel Magnolias if the cast had a graphic yet juvenile level of sexual knowledge punctuated by passing gas:

"Where is your picture going?"

"It's on this Skype site where guys are touching themselves."

Then one woman burped, knowing I was sitting on the balcony. She waved me off to the other ladies and said, "Oh she heard it, but she just laughed." This liberated another woman to audibly fart. Twice. "I like her in more of a grab-your-boobs way instead of a lesbian way," one explained over cigarettes. Not about me, I hope.

Meals were served in the main dining hall, and there was always a fresh salad bar. Dinner was baked chicken, chopped potatoes in a cream sauce and broccoli in a mustard sauce I didn't understand but utterly enjoyed.

Day 2: COMPLETE AND UTTER MENTAL BREAKDOWN. I'd get sporadic texts but wouldn't be able to answer them in the cabin, forced to wait to be in the lodge or dining hall. That's when I trudged the 1/3 of a mile to the mountain view I had so enjoyed yesterday. The mountain was giving me side eye. "Hey there, you're an imposter. You don't deserve to be here."

I sobbed until my face look like a tropical blowfish, a term in Tiny Beautiful Things by Cheryl Strayed that would calm me down over the week. Back after an hour of wailing, I called my best friend Fitz on the cabin's hard phone, my only reliable connection to the world. "Everything is hard work," I grunted. "Getting to meals here is work, relationships are work." And that's when it happened. That's when I started typing the main theme of the book and couldn't stop.

Day 3: The dizziness I'd felt since I got to the mountains disappeared. Did my 20-minute mountain sitting exercise and my first thought was, "I really want to go to the beach." Two trumpeters in one of the music rooms on the grounds played The Way You Look Tonight," which made me miss my girlfriend Lara. Made Bridget and Maria laugh with bits from a delightfully violent essay I'd written last night. Lunch was a lush chicken and rice casserole. 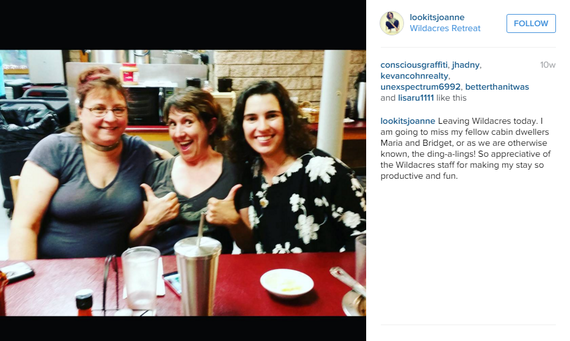 Day 4: My 20-minute sitting meditation became a standing meditation with fidgeting. I felt too fat to sit still. But I still got my mountain thoughts as I stood there doing leg lifts: patches of shade climbed and fell over select parts on mountain trees that were green except for a few orange specs cutting out early for fall. I wondered if someone on the shaded side of the mountain thought it was a cloudy day while the other person on the bright side thought it was a sunny day.

Maria was not at lunch today, which was fried fish and potato cheese casserole. We don't know where she was. No one was worried about it whereas my family would have sent out the Mossad if I didn't show up for a lunch in the woods. Dinner will be Thanksgiving, and I need to save Bridget a slice of pumpkin pie because she has to go to an art opening in Asheville. She said, "Thanks for covering my sweet tooth," as someone might say, "Thanks for covering my ass."

Day 5: I've written and taken out so many words in my book they have become floaters in my eyes. Ate Thanksgiving leftovers for lunch and had a Shabbat dinner presented by Temple Beth El. Brisket with rice and mixed dried fruits and asparagus. Dessert was peach cobbler. Bridget was ecstatic to get her pumpkin pie and she ate it like someone might eat a slice of pizza.

Maria taught me about herbs. She said some people see marijuana as making them freer of inhibition, when in essence it is limiting them by turning off external distractions. She sees in eight dimensions and only two with pot, so she doesn't like it, wigs her out. Apparently peyote can kill you and it's 24 hours of hallucinations and 24 hour recovery time. Yeah, I'm not trying that shit.

Day 6: Wrote over 2,000 words this morning in an essay titled, Dr. Spataro. The Temple Beth El crew was there at lunch and they sang songs, one of them named "Ding-a-ling." "We're the real ding-a-lings," I joked to Maria and Bridget. Lunch was cheeseburgers, macaroni and cheese, salad and onion rings. 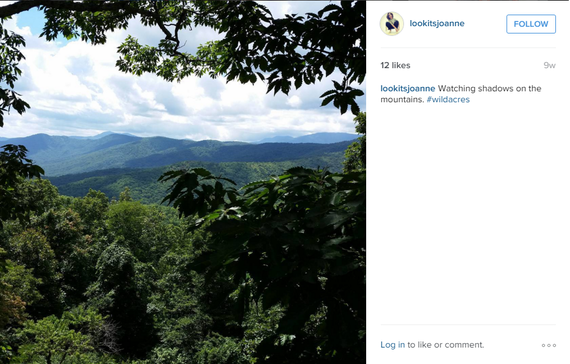 I went to my usual mountain spot and accidentally attended a morning service for Temple Beth El. The rabbi asked everyone to pray for someone who was in need of healing. One woman said her husband got laid off from his job in March, and he was then diagnosed with shingles in his ear. "They say it's temporary," she said. "But we don't know how long temporary is." She said he did a phone interview while having the shingles, which impairs his speech. It made my complaints about not getting Facebook on a mountain seem pretty damn stupid.

There was another lady who said, "I pray for my husband who has inoperable lung cancer, and he's exercising and eating right. He wants to watch his grandkids grow up, but there is nothing more that the doctors can do for him."

The rabbi stood up and then we all sang songs. As the mountain had absorbed my suffering on Day 1 of this retreat, I felt it absorb all of theirs.

That night, I shaved my legs. I shaved other places. I was ready to come home.