That's heavy. To me, that sentence is one of the scariest, most fear-inducing sentences in the Bible. If I'm to take it literally (as many do), it says sin equals death. Even if I'm to take it spiritually... well... death is still death.

I was informed by so many growing up (and continue to be told now) that homosexuality is a sin. Therefore, I'm going to die (literally? spiritually?). I'm going to die and spend eternity in hell because as I was also been instructed, the Bible says homosexuals will NOT inherit the Kingdom of God (1 Corinthians 6:9 NAS). Again... heavy! 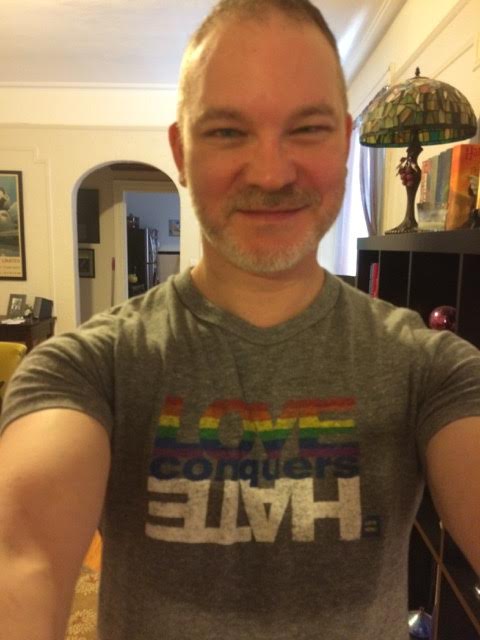 Sin. I have a difficult time with that three-letter word being attached to homosexuality. I've carried it around like the dark, personal storm cloud that Charlie Brown carries above his head. I was taught we (Baptists, Christians) can be forgiven for our sins if we come before the Lord, ask for forgiveness, and have the intent to not do it again.

I will never repent for being homosexual.

I will never pretend that I will stop acting upon my same-sex desires. It's inherent in every fiber of my being. I am attracted to men. Always have been. I knew at a young age that I was never going to be granted forgiveness for being homosexual. Therefore, I've felt doomed to carry this sin around with me forever, my (literal? spiritual?) life dead on arrival. That's a massive albatross to carry around one's neck as an adolescent, teenager, young adult, fully grown man.

I'm 44 years old now and still grapple with sin and its connection to homosexuality. Have you any idea what it's like to be taught that the foundation upon which you stand, the very essence of your being, is a sin? Do you?

Many people may (will) argue that we, human beings, are all given free will to make choices and that we, homosexuals, should fight our urges and desires. Seriously? Same-sex attraction is the only attraction I've ever had, and I refuse to live a life of celibacy.

Why should heterosexuals corner the market on sexual gratification -- be it from a loving relationship or a one-night stand? Why would I be put on this Earth to be tested in such a macabre way?

A week ago, I was lying in bed having stern words with God as if he was in my bedroom and I said, "How dare you? How dare you put me on this Earth and expect me not to act upon my desires?"

There was no response but I felt better and my anger slowly began to dissipate. I realize, in actuality, my anger is the result of the words and actions of other human beings.

I've come to realize that religion has been more detrimental to me -- causing fear, shame, self-loathing and guilt -- than being a homosexual (being myself) ever could or will.

My take-the-Bible-literally Christian critics will already have me committed to an afterlife of torment and anguish in the fiery lake for merely writing the words about not repenting. I run the risk of being crucified in the comments section. Bring it on! That's okay. You're allowed to believe whatever you need to believe to get you through. However, I refuse to carry that dark cloud over my head any longer.

I've spent too much of my life afraid to fully express the love and anger that I feel. I was put on this Earth to live the often fabulous -- though frequently maligned by those who refuse to open their minds -- life of a homosexual. Sling your accusatory rhetoric at me like the villagers hurling their torches at Frankenstein's monster all you want for my newly found courage. But to use Bible verses to taint someone's existence, his very life, as a sin because he is attracted to someone of the same-sex (an attraction beyond his control) is deplorable.

"In the middle of your life anything can happen" is a lyric written by Maury Yeston from the musical Death Takes a Holiday. Some might say I'm in the middle of my life. If so, the "anything" that is happening to me right now is astounding.

I'm confronting my religious past with the fervor of those preachers who used to preach of the eternal damnation that awaited people like me.

I'm making a choice to confront those teachings and stories, and the feelings and memories they evoke. I'm choosing to believe in myself.

I'm choosing to believe that although I may be a sinner in some aspects of life, being a homosexual in not one of those aspects.

...but the gift of God is eternal life through Jesus Christ our Lord. (Romans 6:23 KJV)

The above is the remaining portion of the verse that opened this piece. I've believed in God for as long as I can remember and did ask Jesus into my heart to save my soul from hell. That makes me born again even as I struggle with my relationship with God, my thoughts on sin and death.

I'm angry that it's taken me so long to get to this point of fed-up-ness, to confront the bullshit. Sin may be something that all of us knowingly (or unknowingly) commit daily but being homosexual is not something I'm willing to accept as a sin. Whether you believe it or not, I was born this way. I'm unwilling to accept that my life is reprehensible, a transgression, a violation of any religious or moral principle.

The wages of sin may be death, but the wages of truth (admitting it, living it) is life.