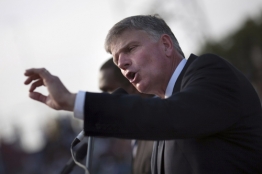 That sounds harsh and I do not mean for it to be unkind. But frankly, I'm growing exceedingly weary of the nonsense that uninformed and misinformed Christian ministers wail about almost continuously. It used to be the Bible that most of them preached even when they knew so little about it. Now, it's politics, too. And, the mixing of the two is pushing me to the brink.

Let me explain. The most recent display of madness is this public endorsement of Mitt Romney by the Billy Graham Association and its principal spokesperson today, Franklin Graham. Of course, to protect their tax exempt status, they did not overtly or publicly endorse Romney. Instead, they hide it behind catch words like "voting for Biblical values" -- something they've stolen from the Roman Catholic leaders who have been equally dishonest throughout this election -- and, just to be sure everyone knew who the "right" candidate was, the Grahams hosted a publicly staged ad campaign, complete with pictures of Mitt Romney visiting the Graham estate in the Carolinas.

Now, this is just the latest place of confusion for me. Not too many years ago, for example, I'm aware that the Grahams would have regarded Romney, a self-professed Mormon, as "unfit" for political office and anything but "biblically grounded." In fact, he would not have been regarded as a viable candidate for any public office in this "Christian" nation. Southern Baptists, and many other Christian denominations, would have agreed. In fact, Southern Baptists spoke of Mormons, and many do still, as "followers of a cult," and therefore in need of Christian conversion.

So, I trust you see my confusion. It is not Romney who has converted. It is these duplicitous Christians and their leaders?

To further complicate matters, Rev. Franklin Graham is now warning that "the end of the world" might just be in sight, if Romney -- without directly stating so -- is not elected. (Follow this link.)

This is hardly the place to discuss a New Testament theology lesson on the meaning of the "parousia" of Jesus. But clearly, there is another, and infinitely more biblical, way of understanding the "end" to which Franklin points or "the return of Christ" than the Scofield-driven, "Late-Great Planet Earth," "Left-Behind" Pre-millenial, Dispensational but un-biblical nonsense that millions of Christians actually believe is taught in the Bible.

If Christians were to actually study the Scriptures, which of course most of them do not, and so were to develop their own understanding of the sacred text itself, they would discern between truth and the nonsense that is preached from scores of pulpits in Christian communions across this country. Instead, however, many of them get their beliefs more from the spurious notes of the Scofield Reference Bible, Hal Lindsey's "Late Great Planet Earth" or the equally spurious B-grade movies they watch as in the "Left Behind" series.

Whatever may be meant by the Second Coming of Christ, it is clearly not that which Christians call the "Rapture." The word is nowhere to be found in Scripture. Pre-Tribulation Rapturist theology was manufactured in the 1830's by John Nelson Darby, promoted by Plymouth Brethren, later published in the notes of the Scofield Reference Bible, and still later popularized in books and films like those I mentioned above. But then, Christian preachers, rather than studying the Scriptures for themselves, have always found it easier to steal their sermons from more popular preachers whom they secretly envied. I know this dishonest game well as I played in it for decades.

Most reputable scholarship today would regard the "end" to which Jesus referred, not as the "grand" end over which Rev. Franklin is arousing concern. Rather, it was the destruction of Jerusalem which occurred, just as Jesus predicted, around 70 A.D. (Matthew 24:34).

But even if there's more to the "end" than what ended in 70 A.D., as many evangelicals would argue, does it not stand to reason that, as long as everyone is expecting the end, the end won't happen anytime soon? (Matthew 24:44). In other words, if the church's Franklin Grahams would just keeping wailing like spoiled teenagers grounded from the Friday-night party, they might just succeed in raising a greater and more widespread expectation of the "return" and so further delay it from happening. That is, if you believe Jesus who said the end will come when least expected (Matthew 24:44).

Contemporary preaching is all so convoluted these days by ministers who seem to be equally confused and misguided. It's not a little dishonest, too. I can not help but wonder, for example, what it says about a minister who would seek to scare people with predictions of the "end" by slyly suggesting ... no, overtly suggesting that a vote for Romney is a vote for "Christian" or "Biblical values"? Franklin Graham, the Graham Association, and Catholic Bishops all across America have been dishonest about all of this for reasons I've noted already. But just think about Franklin's convoluted logic alone. If the "end" is predetermined already -- which is, of course, what Graham believes, and, if the re-election of Obama would likely signal the next step toward the end -- why would Graham want to influence destiny differently than Divinely pre-ordained?

If this were not convoluted enough, consider this: I've heard the Grahams say, as well as pray and not too infrequently, "Come, Lord Jesus, come quickly!" (a direct quotation from Revelation 22:20). It's as if they actually expect, even desire, it all to end and soon. So, unless they get some strange pleasure from tossing about biblical cliches like a pizza chef might toss the dough, wouldn't it make more sense to get Obama re-elected so that the "end" might occur sooner?

Maybe it's just me, but many religious leaders today seem contradictory, confused and, well, just plain wrong about almost everything over which they wail.

When it comes to this election? Vote your conscience. Don't put much stock in what "Prophets of Doom" are saying. Given they're more confused than you are, we would all fare much better if they would just shut up.