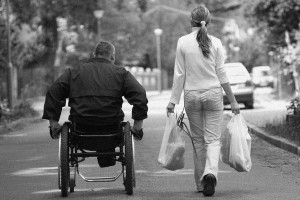 Activities meant to simulate the experience of disability are so often lauded as moving, powerful, eye-opening experiences. With just a few hours in a wheelchair, wearing earplugs, or wearing a blindfold, people supposedly gain a deeper understanding of what life with a disability truly entails. I, for one, don't buy it.

The goal of increasing sensitivity and awareness is a respectable one, but I've long wondered if simulating disabilities ever truly accomplishes this.

How can what amounts to a game of pretend enlighten a person about something that has shaped my entire life? Of course, I realize there are several people and organizations out there that are trying to do their best to use simulation activities to create positive change. But at the end of the day, the temporary glimpse into disability that such exercises provide are just that -- temporary. It is simply impossible to fully immerse yourself in another person's being.

Herein lies the problem with disability simulation. It may make a person more aware of another person's experiences, but it doesn't dig deep to the root of discrimination against people with minority identities. Instead, it's more likely to evoke empathy or pity than true acceptance. I've heard reactions that point to this time and time again. For instance, while chatting with an able-bodied friend of mine who had to wheel around Washington, D.C. for a school project, she told me "I don't know how you do it. When I tried to get on the train, I gave up and got out of the chair to lift it over the gap. It's so hard being in a wheelchair."

Assuming that a majority of people who participate in simulation activities have similar reactions (which most that I've encountered do), why isn't this sparking real noticeable change in ending the stigma and accessibility barriers that I face every day? Twenty-three years after the Americans with Disabilities Act was passed, the disability community still encounters inaccessibility in so many places. Clearly, the takeaway message that is hoped for from disability simulation is not getting through.

Some may argue that this is because too many disability awareness activities just aren't being done the right way, or that enough people aren't involved in them. Well, I'd like to counter that they're just not working. Simulation is not an ideal way to transform society's view of disability.

Consider the fact that for so many, disability is an identity and a culture, as are race, religion, ethnicity, gender, sexual orientation, etc. Now, imagine if schools and organizations began to hold widespread Black Awareness events, during which white people would put on blackface and go around in public for a few hours to gain an understanding of the experiences of black people. I think it's an understatement to say that would rightfully result in a nationwide angry uproar for several reasons.

First of all, the term "awareness" makes minority groups sound like a problem. Second, a brief activity can never replace a lifetime of experiences. If being black and being disabled are both identities, why are disability awareness events the only one of its kind deemed to be acceptable, while awareness events for other identities would undoubtedly be deemed offensive? To me, it feels like the opposite of acceptance to have my entire identity as a person with a physical disability reduced to an isolated simulation experience.

If this logic hasn't convinced you that disability simulation isn't effective, take a moment to ponder the situation in reverse: My disability severely weakens the joints and muscles in my legs, so the only way I can experience walking is by wearing heavy leg braces made of metal and plastic. The awkward waddling I occasionally do around my kitchen during physical therapy in no way gives me a true understanding of what it feels like for an able-bodied person to walk, go up stairs or climb over obstacles each day.

In much the same way, an able-bodied person using a wheelchair to awkwardly push themselves around in no way gives them a genuine understanding of what it feels like for a disabled person to wheel around and be stopped in his or her tracks by a high curb every day. In each case, the simulation isn't natural or accurate. Both myself and the able-bodied person are using nothing more than external devices made of metal and plastic to do something we don't normally do, and this does not translate to comprehension of deeply internal experiences of someone we're not.

Furthermore, it would be silly if while speaking to someone who walks, I said, "I don't know how you do it. Walking is so hard." Of course it's hard -- for me. But for an able-bodied person it's instinctive. And using a wheelchair is hard for an able-bodied person. For me, it's innate. Moreover, being disabled is not so challenging solely because of my physical circumstances, a stereotype that simulation often leads participants to believe; it's hard because of environmental, social and attitudinal barriers.

So, you can be "aware" of me all you want. You can attempt to roll a mile in my wheelchair. You can analyze and discuss and dissect the experience from a million different angles. But we must move away from equating empathy with acceptance. We must embrace differences as a fact of human existence without first needing to imitate them, for these kinds of activities are not effectively contributing to long-term advancements in the disability rights movement.

Emily Ladau writes regularly for The Mobility Resource, where this post originally appeared.

I'm a passionate disability rights activist who lives life on wheels and writes about it.