There is an enormous difference between a breast augmentation and a Cesarean section. Or is there?

On one hand, you've got an elective surgery that may slow, reverse (or at least cover up) skin damage caused by excessive strain on a female body part. On the other hand, you've got... well, sort of the same thing. So, maybe that explains why I feel judged like Heidi Montag exiting the plastic surgeon's office whenever I mention having delivered both of my daughters via a C-section? Either way, I'm tired of it.

Long story short, I was born with a hernia that went unrepaired because there was never any need to repair it. Honestly, I never considered the tiny defect an issue until several months into my first pregnancy when I appeared to have two growing baby bumps. My obstetrician and a surgeon quickly confirmed that the second growth was not an alien, as my husband and I had been calling it, but an abdominal hernia that could become quite dangerous while pushing during labor. Though I was disappointed to settle on a scheduled Cesarean section, the collaborative decision was made based upon the risk both baby and I could face if I didn't.

I was in the 38th week of my first pregnancy with the date of my scheduled C-section nearly one week away when I made the (somewhat infamous) decision to work one more night before officially starting my maternity leave. A senior level producer on television's The Bachelor and The Bachelorette at the time, I was hesitant to hand over the reigns to my maternity leave replacement on the very first night of filming a new season. So as men filed out of the limousine, one by one, hoping to meet the love of their lives, I waddled around, waiting to meet one of the loves of mine.

In the wee hours of the morning, while still on set, I went into labor. Next came rushing home to wake my husband, freaking out because my hospital bag wasn't yet packed, and cursing my way through many (many) contractions.

In the end, I did what any mother would do. I gave birth.

Frankly, it shouldn't matter to you either. 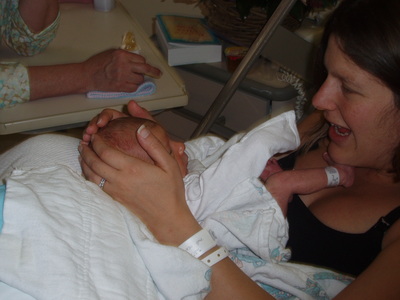 More:
ParentsPregnancydeliveryCesarean section
Newsletter Sign Up
Raise the kind of person you'd like to know
Subscribe to our parenting newsletter.
Successfully Subscribed!
Realness delivered to your inbox

24 Practical Things Your Parents Totally Want You To Buy

If You're A Hot Mess In The Kitchen, These Meal Prep Cookbooks Will Help