Ian Astbury doesn't need to look very far for a reminder of his Buddhist beliefs. Tattooed to his wrist is the final line from the Tibetan Heart Sutra: "Gone, gone, gone beyond, gone altogether beyond. O what an awakening, all hail!" Yet the 49-year-old singer of veteran English rock band The Cult -- and collaborator with members of The Doors, Black Sabbath, Guns N' Roses and other rock titans -- has also traveled far afield in search of spiritual and cultural insights, from Dharamsala to Kathmandu to Puna.

In turn, he has become an eloquent, impassioned defender of Eastern traditions, once suggesting, in an essay in the pages of Spin Magazine, that the Tibetan flag be adopted as "the international banner of free speech, free thought, religious and racial tolerance for all." Tibet, he suggested, "is symbolic of our spiritual crisis [in the West], a need to turn inwards for a solution."

A restless autodidact who routinely references Joseph Campbell, Terence McKenna, Pema Chödrön, Chögyam Trungpa Rinpoche and other teachers, Astbury leads what he calls "a very nomadic existence." In the last few years, he's relocated from New York City to Los Angeles, and performed in locales as far flung as Belgium, Abu Dhabi, Buenos Aires, and Austin, Texas, where The Cult recently debuted material from their first new album in five years, the richly textured and lyrically compelling Choice of Weapon. 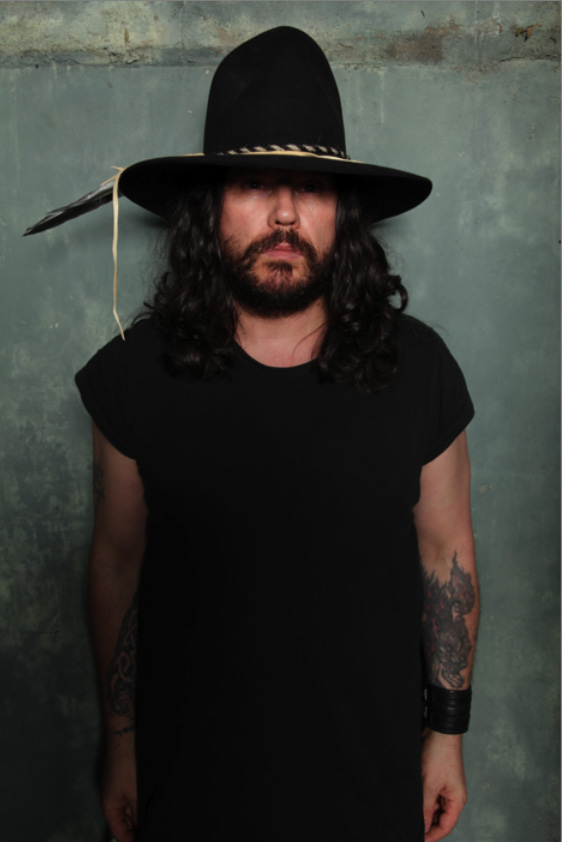 "This record is about going through a dark, self-destructive period of my life, where I definitely lost my way," Astbury noted in a recent interview. "I lost the vision of where I was going, and I had no idea where I was anymore. It's about coming out of that." It might be argued that the visceral whack of The Cult's brand of heavy, dharma-conscious rock is just the kind of Zen stick a sleepy pop culture needs administered to its backside.

What was it about Tibet that impacted you so strongly?

You get the sense with Tibetans that they've given human life and human experience great consideration, and maybe that's partly due to how the dharma teachings came up from India. But there's also something about the terrain of Tibet, which can be quite unforgiving. Things are enhanced -- it's a kind of super-nature. It's almost like it amplifies the dharma. My sense of Tibet is that they're putting the brakes on this constant need we seem to have to build more, move further ahead in science, continually define ourselves by conjuring up the new fad, entertain, escape from the finite. The Tibetans seem to understand that we need to get in front of this stampeding herd. I felt that the people I met there were so connected to being alive, to the Great Mystery, and even to death.

There was a life force in their eyes that I just don't experience in the West, apart from very young people, who are still very full of vigor. With the Hunger Games coming out this week, there are a lot of teenagers out there with sparkle in their eyes. What is it they're looking for in these films? What are they looking for in Twilight or Harry Potter? What is it in these myths that resonate with these young spirits? The big existential questions are at least being acknowledged, if not answered, on some level, by these films.

In Tibet, that magic is everywhere; in fact, they live in that modality. Those questions are not separate. You wonder what might happen if only we were to apply that to the Western way of doing things. With Tibetans, you get the feeling that they already know all this about the West. They see how the West is in this neurotic, fucked-up state, and they don't think they're missing out on anything.

In Tibet you meet these former monks who become guides, and while most of them are quite wary of the Chinese regime, I met this one former monk who was just completely outspoken about the Chinese, even a bit of a loose cannon, and quite a colorful guy, in his mid-30s. One night he said to me, "You are the incarnation of a protector deity." I said, "So, not an enlightened lama or monk?" And he said, "No, no; just a protector deity. You have to guard the Dharma, to hold the space." I'm thinking, "Oh, shit, more of a Bodhisattva gig. You mean I have to give up my seat on the bus?" Yep. [Laughs.] That was such a drag to find that out! But it was also a reminder that there's work to be done, and not to get caught up in the ego of it. Okay, so I'm being of service.

Do you follow a particular Buddhist way, perhaps the Tibetan school or the Zen approach?

I'm a smash-and-grab Buddhist, I guess. I do what I can when I can, and I use what I can when I can. I try to be mindful as much as possible. I certainly lapse into states of complete unconsciousness. I'm living a human life. I'm not trying to "perfect" myself. I try to be of service when I can, and be mindful. Whatever's going on, the dharma tells us that it's all just business as usual. It reminds us to confirm yourself not by what's going on externally, but to accept where you're at, wherever that is, and simply to sit and expand your awareness.

On Choice of Weapon, you sing about being "consumed by the trials." Your early life was pretty challenging, too, wasn't it?

I watched my mother die of cancer, a very slow, painful death, and I watched my family just disintegrate. [Astbury's mother, Marion Lindsay, died in Glasgow, Scotland on May 14. 1979, Astbury's 17th birthday.] When my mother died, there was no obituary on the newswire; society didn't stop and mourn my mother passing. It was just a simple death. We didn't have much. We had lost everything we had, and were pretty much living in squalor. My father was working two jobs.

It's very archetypal, the struggling artist coming out of this kind of background, but it was my reality. Some people talk about coming out of the ghetto like it's a badge of honor, but for us it wasn't. I never even considered coming out and saying I'd come from a broken home. I only say it now because maybe it gives context to my art, and dispels some preconceived myths of who I am, that just because I was an MTV star back in the '80s, I come from some sort of privileged position.

I've struggled for everything I have materially in my life, and everything in terms of awareness, too; none of it came easy. It all had to be experienced first-hand, and even with that, the application of those awarenesses hasn't been easy either. There have been a lot of moments where I felt like throwing in the towel. But I'm compelled to keep going. In fact, the real teaching moments for me have been in times of personal crisis, times when the rudder has come right off the ship, and I've had no idea where I'm going.

Being in the music business, being an entertainer or an artist, you can be raised up or you can be completely forgotten. When that door closes, all of a sudden you're in a world of hurt. And where do you turn? You can turn to the path of self-destruction, or turn inwards. Luckily, in the '80s, I came across Cutting Through Spiritual Materialism by Chögyam Trungpa Rinpoche. That was like dynamite in my hands, the idea that the dharma is fresh and it's happening in this instant. It's accessible, right now. Wow.

My ex-wife said to me, "You definitely take the hard lessons in life." There are many ways to be hit with the stick before you get the message. It's as though you're a kid and you keep sticking your finger in the flame, and then you ask, "What's this 'getting burnt'"? There's a message every time you get burnt, but we don't always retain it. We forget, and we do it again. But hopefully, there's a hunger in the spirit to really understand the lesson. In the incarnation of this life I'm going through, I think my ultimate intention is to find out, "What is the lesson in this?" And the message is, "Pay attention. Pay attention. Pay attention."