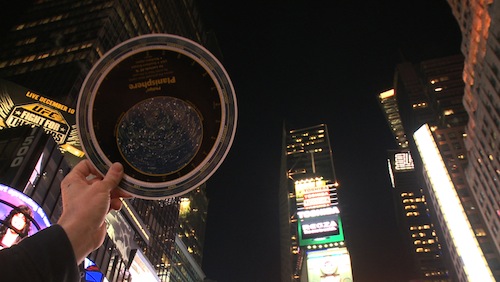 "...When God in his jealousy sends fear or storm from heaven, and they perish in a way unworthy of them. For God allows no one to have high thoughts but Himself." Herodotus

The first time I became fully aware of the grandiosity of the firmament above was as a teenager, on a trip to New Mexico with my dad. Coming home from dinner to our ruggedly charming rented bungalow just outside of Santa Fe, I casually looked up, probably to avoid my father's latest lecture. The explosion of tiny bright flecks I witnessed and the grandiosity of those countless stars in the sky overwhelmed me, so much so that I had to lie down to fully recoup. That night radically changed the way I look at the universe, and my own place in it.

In an upcoming documentary titled The City Dark, filmmaker and amateur astronomer Ian Cheney ponders if that kind of experience will really be possible for many more generations to come, and how it is already highly improbably for anyone living through the over-lit nights of our over populated, over stimulated cities. Italian researchers recently announced that two-thirds of all humans now live under skies polluted by artificial lights. As a New Yorker, I know I haven't seen more than a handful of stars on any given night and the sad thing is, I didn't remember what I was missing until I watched The City Dark.

Author Jane Brox, who wrote Brilliant, says "The struggle to create more and more light was a struggle to dominate the night, rather than be dominated by the night." How many of us need night-lights plugged in next to our beds, or the glare of the TV shining on us, just to feel safe in our own homes, just to be able to fall asleep? And yet this very symbol of protection in our modern society could also be making us sick. Nightshift workers have higher cancer rates than those who work in the daytime, and have we even stopped to think why we need so many impossibly bright lights, when we are then forced to buy eye masks and light blocking shades to keep them out...

What makes Cheney's film different from, say, taking a day trip to the Hayden Planetarium or reading up on this important topic, is its potential for widespread reach, for a whole new demographic to get the message. In an age when most faces we meet are lit by the constant glow of their mobile devices, a documentary that is easily watched, easily shared on Facebook or through YouTube seems like the ideal medium. And Cheney himself, who was born in Maine but now lives in Brooklyn, is very active as a conservationist, spreading the word through talks, events and his writing. In 2011, he and longtime collaborator Curt Ellis received the Heinz Award for their environmental advocacy.

Light pollution is a big enough problem on its own, affecting the sleep and productivity of those of us who live in urban areas. But perhaps the most harmful by-product of our obstructed view of the heavens above becomes our inability to comprehend that we, as humans on Earth, are just a tiny speck of the big picture. We are not the entire universe. Bronx-born astrophysicist Neil deGrasse Tyson says in The City Dark: "When you look at the night sky, you realize how small we are within the cosmos. It's kind of a resetting of your ego. To deny yourself of that state of mind, either willingly or unwittingly, is to not live to the full extent of what it is to be human."

And then, of course, there is always the possibility of an incoming asteroid that will simply be invisible to astro-scientists if the skies surrounding their equipment are too bright. In brief, if our hubris doesn't kill us, the falling sky just might!

Cheney's film is one of those must-see works of art that can change its audience's outlook, while also providing an entertaining evening at the movies. It is perfectly complemented by an award-winning score by The Fishermen Three & Ben Fries.

The City Dark opens at the IFC Center in NYC on January 18th. It is distributed by Argot Pictures, and presented by Rooftop Films & Edgeworx Studios.