First published by the National Center for Science Education.

All mankind is of one author and is one volume; when one man dies, one chapter is not torn out of the book, but translated into a better language, and every chapter must be so translated... God's hand is in every translation, and his hand shall bind up all our scattered leaves again for that library where every book shall lie open to one another. (John Donne, Devotions Upon Emergent Occasions, Meditation 17)

To convey an impression of the life, death and hope of Ian G. Barbour, I can think of no more suitable eschatological picture than that offered four centuries ago by John Donne. On Christmas Eve, 2013, Ian left us -- like Abraham, "full of years" -- and surrounded by his loving family. Ian loved books: He loved reading them, writing them and vigorously critiquing and defending them among people he valued more than any book. I believe he would happily have approved of Donne's metaphoric description of "the life of the world to come" as a library, a table of opened books eagerly sharing their contents with each other.

For those of us who have dedicated our careers to exploring questions at the interface between science, religion, philosophy and ethics, Ian Barbour was a towering figure, one of the truly great interdisciplinary thinkers of the 20th century. A longtime professor at Carleton College in Northfield, Minnesota, Ian was a scholar of international proportions, a colleague of hundreds through his collaborative work, a mentor to thousands of students in his classes and an influence on countless others who may have met him only through some of his copious writings. I first came to know Ian's work through his text in an undergraduate environmental ethics class in 1977: Earth Might Be Fair: Reflections on Ethics, Religion, and Ecology (1972). 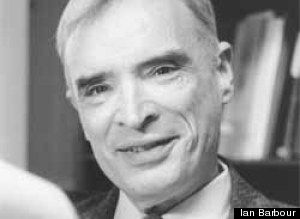 Ian was instrumental in taking questions from the long-standing relationship between science and religion -- questions about the origin and future of the universe, the age of the Earth, the unfolding of life, or the nature of science -- and reframing these in the language of modern science and in the idiom of contemporary theology. Beginning with Issues in Science and Religion (1971) and continuing in his Gifford Lectures and other works, he helped create space for new issues raised by genetics, neuroscience, ecology and the information sciences. Ian was an integral participant in the decade-long series of conferences on the theology of divine action viewed through the lens of the natural and life sciences, jointly sponsored by the Center for Theology and the Natural Sciences (CTNS) and the Vatican Observatory.

Among Ian's seminal contributions to interdisciplinary dialogue was his fourfold typology, adopted and extended by numerous others. With due caution for reifying such vast areas of human endeavor as "science" and "religion," Barbour identified the principal styles of interaction historically as conflict, independence, dialogue and integration. Methodologically he advocated critical realism, a view that "preserves the scientist's realistic intent while recognizing that models and theories are imaginative human constructs." He was concerned about the danger of absolutizing in either science or religion:

Christianity should never be equated with any metaphysical system. There are dangers if either scientific or religious ideas are distorted to fit a preconceived synthesis that claims to encompass all reality. We must always keep in mind the rich diversity of our experience. We distort it if we cut it up into separate realms or watertight compartments, but we also distort it if we force it into a neat intellectual system. A coherent vision of reality can still allow for the distinctiveness of differing types of experience. (Religion and Science, 105)

For all of his erudition and discursive brilliance, Ian was a humble man. He never claimed to have created the dialogue between science and religion. When he won the Templeton Prize for Progress in Religion in 1999, his natural impulse was to donate the bulk of the prize money to his longstanding friend and colleague Robert J. Russell, founding director of the Center for Theology and the Natural Sciences in Berkeley, California. Ian regarded CTNS as the organic embodiment of the robust and sustained dialogue for which he himself had striven for forty years.

Ian's kind and gentle nature was manifest in the way he related to people at every level. In my observations over the course of numerous conferences administered by CTNS for the Science and Religion Course Program (1997-2002), Ian took as sincere an interest in the work of graduate students as he did in the research programs of established scholars. He was meticulous and never hasty in his responses, as I discovered one day during a conference session on eschatology. As moderator I made the mistake of allowing a brief final question with only two minutes left before our one-hour lunch break. I learned that one could not ask a deep question of Ian and expect an answer of fewer than 10 minutes! This was not at all because he was pedantically concerned with elaborating detail for its own sake -- far from it. Rather, Ian listened to the questioner with attentive respect and tried to engage every aspect of the question as he understood it. What impressed me most was the integrity of his response -- as Ian thought through his answers, we watched a special sort of creative process in action.

In bidding adieu to our friend, a man of intellectual courage, of meticulous scholarship and of uncommon grace, let me say that my most enduring impression will be of Ian's clarity of understanding. He had a profound appreciation of science as the study of the evolving cosmos that is our home. As a religious believer, he placed his trust in God, the ground of all that exists within or without the cosmos. Ian recognized that in the last analysis, there is an apophatic quality to theology and an ineffability to the infinite mystery that is the wondrous creativity of God. John Scotus Eriugena wrote in the ninth century, "We do not know what God is. God Himself does not know what He is because He is not anything. Literally God is not, because He transcends Being."

But if God infinitely transcends Being, Ian knew that God is also immanently present to all beings. As St. John the Disciple said, "Beloved, if God so loved us, we also ought to love one another. No one has ever seen God; if we love one another, God abides in us and his love is perfected in us." (1 John 4:11-12). Ian Barbour's prayer might well have included the Song of Solomon's expression of the immanence of God: "Set me as a seal upon your heart, as a seal upon your arm; for love is as strong as death." (Song of Solomon 8:6)

In memory of our dear friend Ian, I invite you to click the link and listen to a heartfelt presentation of a lovely passage from the Song of Solomon, "Set Me as a Seal Upon Your Heart. It is set to music by Minnesota composer René Clausen, and is sung by the choir of St. Olaf's College in Ian's home town:

Theology for a Sustainable Future