English novelist Ian McEwan used his platform as Dickinson College's commencement speaker to advocate for free speech and expression of ideas on Sunday.

His speech addressed one of this year's major intellectual discussions: the protection of potentially offensive speech. On college campuses, this includes requests for "trigger warnings" on required readings and on-campus "safe spaces," where students can avoid conversations on sensitive topics. During graduation season last year, several commencement speakers were uninvited following student-led protests.

McEwan discussed Brandeis University withdrawing its plan to give an honorary degree to Ayaan Hirsi Ali, who has criticized Islam.

"It can be a little too easy sometimes to dismiss arguments you don’t like as hate speech or to complain that this or that speaker makes you feel disrespected," McEwan said. "Being offended is not to be confused with a state of grace; it’s the occasional price we all pay for living in an open society."

The author's speech touched on recent instances that questioned the freedom of expression, including writers boycotting the PEN American Center awards after they announced the Freedom of Expression Courage award would be given to Charlie Hebdo, a French satirical newspaper that was attacked by gunmen in January. McEwan called the boycott "a disappointment."

He said that while religion, atheism and all thought systems are "of course" worthy of respect, they have to also be open to criticism, satire and -- sometimes -- mockery. He reminded graduates that they are lucky to be in a state that allows for such freedom, and it is their responsibility to support openness.

"Freedom of expression sustains all the other freedoms we enjoy," McEwan said. "Without free speech, democracy is a sham."

McEwan acknowledged that protected speech can sometimes be hard to identify, but it is vitally important for graduates to allow for open discussion.

"I hope you'll use your fine liberal education to preserve for future generations the beautiful and precious -- but also awkward, sometimes inconvenient and even offensive -- culture of freedom of expression we have," McEwan said. 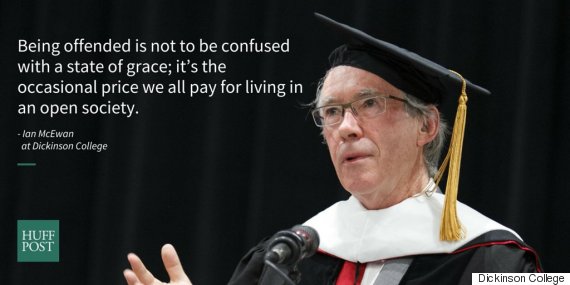