Die-hard “Beverly Hills, 90210” fans have been waiting for a reunion show since the popular drama went off the air back in 2000, but according to Ian Ziering, television networks haven't been nearly as interested.

The actor told HuffPost Live on Tuesday that he had planned a televised reunion of the original cast, which was to air on Sept. 2, 2010 (a clever “90210” reference).

“I tried to produce [a reunion show] a couple years back. I was going to have dinner at Ian’s, where I was going to invite the whole gang over,” Ziering told host Ricky Camilleri. “Of course, this was landscaped, not scripted. There would be cameras all over the place, and we would just talk about specific moments around the dinner table. Very informal.”

But Ziering had trouble pitching the concept of the show.

“I couldn’t get any of the networks to buy it,” he said. “You know, maybe I should put a little Kickstarter, [GoFundMe] thing together and make it happen.”

But there's still hope: Ziering assured that a reunion could definitely be in the works one day.

“It’s entirely possible. We’re all still really good friends. … We have reunions all the time,” he said. “They’re not on TV, we’re just hanging out. I had breakfast with Luke [Perry] the other day. Jason [Priestly], I talk to once in a while. Brian [Austin Green] and I talk all the time.”

Although the actors have had a few bumps in their friendship -- for example, the feud between Jennie Garth and Shannon Doherty or the drama surrounding Jason Priestley's memoir -- Ziering explained that their squabbles are nothing more than tension between siblings.

“There’s always drama amongst brothers and sisters, so it’s more like that than it is adversarial. We’re like a family. I wouldn’t be surprised if there was a reunion show," he said. 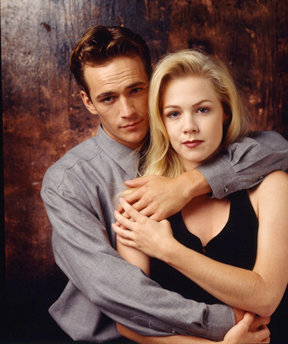