Note: This is the sixth review of the seven Batman serials and movies that prefigure the current Christopher Nolan/Christian Bale cycle. (I skipped Batman Returns, but if you really need it, it's here.) For many, it'll be too much information. For others, it won't be enough. Apologies all around.

Let's face it: Bruce Wayne is one effed-up dude. His parents were killed in front of him, and, since he's rich and doesn't have the distraction of making a living, he's dedicated his life to dressing up in a bat suit and prowling the night in search of crime. But Batman Forever wants him clean. It wants him psychoanalyzed and cured. And this is what it does. By the end of the film, his repressed memories are found, his split personality is tied together, and he changes from a Batman who must fight crime to one who chooses to fight crime. I'm OK, Batman's OK. Blech.

You look at the cast and wonder "What went wrong?" Tommy Lee Jones as Two Face? Great! Jim Carrey at the Riddler? Perfect! Nicole Kidman as the love interest? Sexy! Instead both supervillains go way over-the-top while Kidman reads half her lines like she's in a 1-900 ad. Is it all Joel Schumacher's fault? Is no one else to blame for this entire mess? 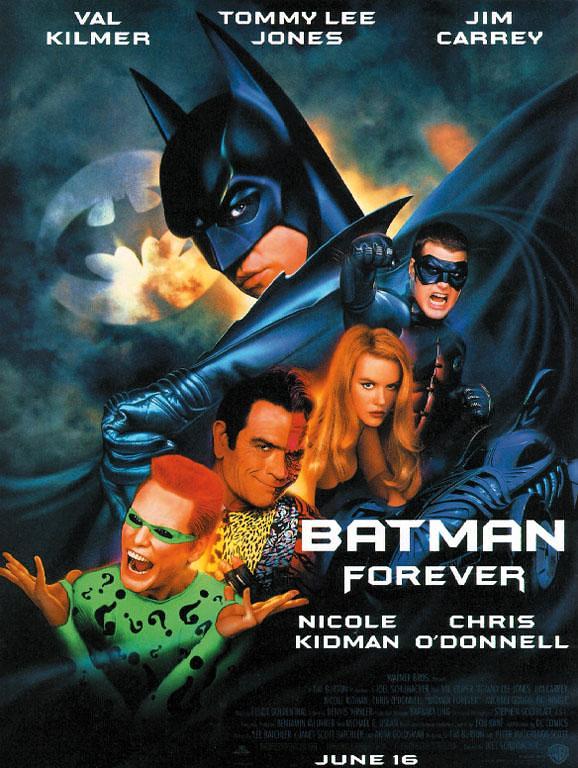 At least we begin this movie (as opposed to Batman Returns) in media res. Two Face is already Two Face and he's holding a bank guard hostage and it's up to Batman to save the day. But it's a trap, Batman falls for it, and he and the guard are locked in a vault that is yanked out of a skyscraper and dangles by a chain from a helicopter while it slowly fills with acid. Nice deathtrap. While the guard freaks, Batman uses the guard's hearing aid to listen to the vault's tumblers and get them out. Then, disengaging the vault from the helicopter, he uses the batrope to swing the vault back neatly into place, hardly raising any dust in the process. Ah, but the adventure isn't over. Batman, still attached to the helicopter, is pulled around Gotham the way that Jackie Chan, in Police Story III: Supercop, was pulled around Kuala Lumpur -- but without nearly the vertiginous thrill Jackie, a true superhero, gives you. By the end of this joyride, Gotham's version of the Statue of Liberty has its face accidentally sheered in half, giving it Two Faces's appearance. It's a fairly idiotic coincidences -- unplanned by Two Face -- but, all in all, a bang-bang beginning.

Unfortunately, there's dialogue. When the batsignal next appears in the sky, it's not Commissioner Gordon waiting for Batman at police headquarters but Dr. Chase Meridian. Ever the professional, she's wearing a low-cut dress over a long black coat:

Batman: You called me here for this? The batsignal is not a beeper.
Chase: Well, I wish I could say my interest in you is...purely professional.
Batman: You trying to get under my cape, doctor?
Chase: A girl can't live by psychoses alone.
Batman: The car, right? Chicks love the car.

Gordon interrupts this tête-à-tête before it gets more embarrassing, at which point we get the drawn-out origin of the Riddler, a.k.a Edward Nygma, a brilliant kook who works at Wayne Enterprises, idolizes Wayne, and has developed a device that "beams any TV signal directly into the human brain." Bruce is obviously wary of this breakthrough ("Tampering with people's brainwaves. Mind manipulation. It just raises too many questions"), and Ed's clinging, unnerving adulation -- revived by Carrey a year later in The Cable Guy -- turns to bitterness and thoughts of revenge. First he experiments on his supervisor. The result turns Nygma into a super-powered brain spewing the flotsam and jetsam of pop culture. Which is just one problem with this Riddler. Why the riddles? Sure, he likes games and puzzles, and, yeah, Nygma's got that Riddler character in a glass booth in his cramped apartment, a refugee from some midway somewhere; but since the filmmakers give greater emphasis to the pop-cultural vernacular of Jim Carrey than the riddle-me-this dialogues of the Riddler, you wind up with a character who only has a tangential relationship to his supervillain persona. It would've made more sense to call him TV Man.

Once again, the multiple supervillains don't serve the storyline. Supervillains are basically divas -- huge egos masking tiny self-esteem -- so why team up? The Riddler wants revenge on Bruce Wayne, Two Face wants revenge on Batman, so why get together before they know Bruce Wayne is Batman? Worse, both villains hit the same note -- over-the-top crazy -- meaning, at times, Jones is forced to stand still while Carrey performs shtick. That's like Aretha singing background.

The two supervillains weren't enough for the studios, either; they had to bring in Robin. Once a 10-12 year-old when he was introduced in 1940, Dick Grayson is now played by a 25-year-old who looks 25 years old. Somewhere Frederic Wertham smiles.

In this version, Two Face kills Dick's family, the Flying Graysons, so Robin hooks up with the Two Face storyline, and Dick understandably wants revenge on Two Face, so he also hooks up with the "I'm OK, Batman's OK" storyline, as Bruce repeatedly warns him about the emptiness of revenge. But he's still an annoyance. He's a cocky kid in a 25-year-old's body who quickly seems to forget his parents' death. Once he figures out Bruce is Batman, what does he do with this powerful knowledge? Blackmail Batman into becoming his partner? Not immediately. First he steals the batmobile, pretends to be Batman, and rescues a pretty girl from a marauding gang of Mad Max refugees, only to require Batman's help when more Max reinforcements arrive. Given the chance to be Batman's sidekick, and given the chance to watch Two Face die, he instead saves Two Face's life (oh, Hollywood), and for the rest of the film he's a non-entity, a pawn in the Riddler's game, trapped as easily as Dr. Chase Meridian.

Who doesn't find out Bruce Wayne is Batman? He might as well be wearing a neon sign. Dick Grayson figures it out, as does the Riddler, who tells Two Face (and presumably all of his henchmen?). Bruce is about to confess the knowledge to Dr. Chase Meridian when she kisses him and figures it out for herself. Chase is Batman's third woman in three movies, and all of them figure out his secret identity, yet even after they break up (in-between movies), none tell anyone. Which is really, really sweet.

So all of these characters converge at the end, with Two Face relegated to the part of Riddler's henchman, and Batman, forced to choose between saving Batman's partner and Bruce's girl, saves both, because, as he tells the Riddler, he chooses to be both. That is, Batman and Bruce. That is, he's no longer effed up. Which is really, really sweet. And, of course, the beginning of the end of this version of Batman.

Well, there was one final nail.