Note: This is the fourth review of the Batman serials and movies that prefigure the current Christopher Nolan/Christian Bale cycle. For many, it'll be too much information. For others, it won't be enough. Apologies all around.

Although vaguely aware that a new Batman movie was being made in the late '80s, I didn't give it much thought until February '89, when I went to Dirty Rotten Scoundrels, starring Steve Martin and Michael Caine (ironically, the future Alfred in Christopher Nolan's version), and a trailer for Tim Burton's Batman came on. The sets, the costumes, the dark lighting, the ominous music -- everything looked perfect. "What are you?" "I'm Batman." So cool. Suddenly I didn't want to see Dirty Rotten Scoundrels anymore. Suddenly I had a visceral need to see this Batman. I'm not sure why. I hadn't collected comics for 10 years and I was prepping for grad school in history. Still, opening day, I dragged my girlfriend to the first performance at the St. Anthony Main theaters in Minneapolis. I had to be there.

I was a little disappointed. I still am. 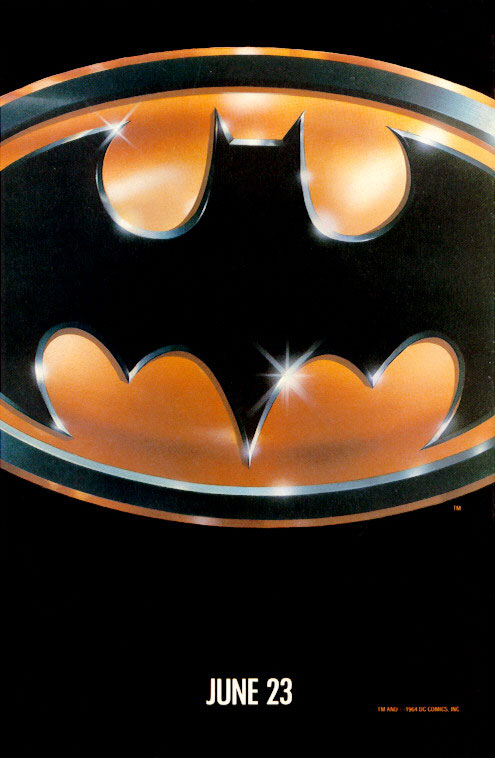 The first half of the movie is well-made and stands up 20 years later. A couple with child is lost in the wilds of Gotham City -- both a play on tourists' fears in New York at the time (the mayor is even an Ed Koch look-alike) and an echo of the origin of Batman. They take a wrong turn, are robbed, their cries go unheard...except for a dark figure on a rooftop. The two crooks then count their loot on another rooftop but the conversation turns to something creepy happening in Gotham. Like to their friend Johnny Gobs:

Crook 1: Hey man, Johnny Gobs got ripped and took a walk off a roof. No big loss, right?
Crook 2: No, man, that ain't what I heard at all. I heard that the Bat got him.
Crook 1: The Bat? Aw, man, give me a break, will ya?
Crook 2: Five stories straight down and there wasn't no blood in the body.
Crook 1: No shit, it was all over the pavement.

They're ripe. They're scaring themselves before they even see Batman, and when they do see him, they freak. One shoots, Batman goes down. Still, they run. When he rises, like a vampire, they're paralyzed with fear and he takes them pretty easily. The whole scene is one of the better examples of why the bat shtick works: "Criminals are a superstitious, cowardly lot," etc. The way Burton shoots the scene accentuates this: like a horror film, with Batman as the horror.

Plot elements are quickly introduced. There's a new D.A. in town, Harvey Dent (Billy Dee Williams), who, with Commissioner Gordon (Pat Hingle), is going to clean up Gotham, particularly the syndicate of Boss Carl Grissom (Jack Palance). Meanwhile, Grissom's right-hand man, Jack Napier (Jack Nicholson), is sleeping with Grissom's girl (Jerry Hall), and Grissom knows it (but the card-loving Napier doesn't know he knows it), and, meanwhile, tabloid reporter Harvey Knox (Robert Wuhl) pursues rumors of "The Bat." His stories, mocked by his colleagues, draw the attention of photographer Vicki Vale (Kim Basinger), who seems to have a thing (yes, a sexual thing) for bats, and the two, teaming up, pursue Gordon, who will be at a fundraiser at Wayne Manor, which is where they go. A nice, neat package.

I love the way Michael Keaton plays Bruce Wayne. We usually see him as a socialite, a playboy, and I suppose you could say he is here, too (he beds Vicki Vale pretty quickly), but it's a loose, complex take on Wayne. Keaton plays him as if he's perpetually distracted, as if he's always thinking about something else. When Vicki Vale joins him at Wayne Manor for dinner and asks whether he likes the room they're in -- cold and lifeless -- he says, "Oh yeah," then looks around, puzzled. "You know, to tell you the truth, I don't think I've ever been in this room before." The '40s serials played Wayne like Don Diego de la Vega -- bored and fey -- while Adam West, Val Kilmer and George Clooney played him as straight as they played Batman. Only Christian Bale, who spends most of Batman Begins as Bruce Wayne, and who then performs the role of drunk playboy for the people of Gotham, comes close to something as interesting as Keaton's performance, but I'd still go with Keaton. It's as if this Bruce Wayne is using all his intensity, all his concentration, for Batman, leaving none for himself. You could say he's never really there as Bruce Wayne because he's not Bruce Wayne. He's Batman.

And so Boss Grissom sets up Jack Napier at Axis Chemicals, and Batman arrives on the scene and Napier winds up in the chemical sludge that turns him into the Joker. But it's here where our neat package becomes, if not untied, at least a little frayed.

Batman has Napier in his clutches, but Bob, Napier's right-hand man, puts a gun to Commissioner Gordon's head, forcing Batman to put Napier down. But why does Batman do this? We, of course, know that Gordon and Batman get together, but, in their universe, what is each to the other? More to the point, why would Bob assume that putting a gun to Gordon's head would control "The Bat," this urban legend known to kill criminals? The Bat is still a crazy vigilante here but Bob is already acting as if he's a crime-fighting institution in league with Gordon.

In fact, this is the only time Batman and Gordon hook up in the entire film and it's from a distance. Neither ever speaks to the other. So why does Gordon wind up wholeheartedly embracing Batman? Embracing the bat signal? In other words, how does Batman go from vigilante to crime-fighting institution? The characters' actions aren't logical within their own universe. Yes, Batman 1) saves Gordon from Bob, 2) figures out the Joker's death-grimace formula and 3) removes the Joker's gas balloons, but to Gordon he's still a vigilante who 1) blows up Axis Chemicals and, 2) crashes the batplane into the steps of the Gotham Cathedral. Add reckless endangerment (the chase through downtown Gotham) and kidnapping charges (Vicki Vale to the batcave) -- not to mention showing up the entire Gotham police force -- and you wonder why Gordon hooks up with the Bat. It seems to add to our sense of his incompetence.

The middle portion of the movie belongs to Nicholson as the Joker. There's that great "Mirror!" scene (later satirized in a classic "Simpsons" episode), where the vain Jack Napier realizes what he's become and, as he laughs, you can hear his mind snap. He revenges himself on Boss Grissom and his moll but, oddly, not on The Batman. His beef with Batman seems borne of jealousy -- Batman grabs his headlines, his girl and his balloons -- rather than, you know, the fact that Batman helped create him.

1. Winged freak? Terrorizes? Wait till they get a load of me.
2. Can you tell me what kind of a world we live in when a man dressed up as a bat gets all of my press?
3. Jesus Marumba. A lovely beast like that running around could put steam in a man's strides.
4. Never rub another man's rhubarb.
5. This town needs an enema!

Nicholson plays the Joker over-the-top yet somehow restrained -- particularly when compared with subsequent scene-chewing supervillains. I love his dopey "Oop...oop" noise after the first comment above, as if imitating the reaction of the great unwashed.

But the plot keeps fraying. Bruce Wayne goes from avoiding Vicki Vale to (almost) telling her his secret identity. But at that moment he also discovers the Joker is the man who killed his parents. In other words, this is what his entire life has been building towards -- revenge on this man! -- but the film, rather than barreling us towards this revenge, suddenly gives us Vicki in the batcave. Alfred has brought her there without consultation. And rather than Vicki going, "Oh my god, you're Batman!," these are the first words they give her to say: "Tell me if I'm crazy, but that wasn't just another night for either of us, was it?" Talk about a downer.

Still, Batman's got a mission, right? He's going after the Joker. Except, rather than face to face, mano a man, he keeps confronting him via machinery. A remote-controlled batmobile blows up Axis Chemicals. His batplane takes away the Joker's gas balloons. Question: When he strafes the Joker in the batplane, was he trying to kill him? If so, why does he miss? More to the point: Why would he go for a distant kill in the first place? This is his life's work here! Wouldn't he want to hold him in his hands, choke the life out of him? Instead he does this. He strafes, misses, and the Joker pulls out a superlong gun from his pants that somehow shoots down the batplane.

It's at this point that Batman, which started out with such gothic potential, becomes a joke that never quite recovers.