PORTO, Portugal (AP) - Smoke hung heavily over this hilly city, broken by flickering flames, when I mustered my courage, plunged into the crowd and brought down my bright-green hammer on a stranger's head.

"Bom Sao Joao!" - "Happy St. John!" - the gray-haired man beamed as he hit me back, the circus-like squeaks of our soft plastic hammers inducting me into the celebration of Porto's patron saint.

All around, tens of thousands of equally armed revelers were indulging in other local St. John rituals - devouring sardines off the smoky outdoor grills and sending papier-mache mini hot-air balloons heavenward.

From late spring to fall, virtually all Spanish and Portuguese cities -from capitals to hamlets - turn into moveable feasts in honor of their patrons.

The multiday, multigenerational revelries provide unique occasions to experience the distinct cultures together with locals at their proudest and perkiest. Here are some details on four Iberian holy days that I've enjoyed.

"Isn't this what you do for San Isidro?" I asked a bit defensively.

"Mostly we just party," was the rather apologetic response - which I'm sure pleases St. Isidore the Laborer (and his wife, whose statue is also carried in procession).

I still thrilled together with wide-eyed kids as the "gigantes y cabezudos" -13-foot-high (4-meter) puppets - paraded through the historic Puerta del Sol and Plaza de la Villa. I hummed along as older couples danced the "chotis" near the Royal Palace and as a flamenco performance vibrated through the stage-perfect Plaza Mayor.

With friends from New York and Rome, we squeezed among ebullient throngs of bullfig h ting fans at the landmark Las Ventas arena, cheering and recoiling as world champions El Fandi and Fandino pirouetted around unusually feisty bulls.

But the last afternoon, even I relented and, skipping the state-fair-like madness at la Pradera, simply chilled with the holiday-wearied crowds among the shady lawns and rose garden of El Retiro park.

Bullfights, dances and a buzzing fair also mark the Corpus Christi celebration in this gorgeous southern city full of monuments from when it was the last Islamic stronghold to fall to Spain's Catholic kings.

But the atmosphere of the signal event could not be more solemn - appropriately enough, since the celebration here dates from those reconquista days and centers on the Eucharist carried in procession.

After a packed Mass, I watched as dignitary after dignitary filed out of the triumphantly grand cathedral. Black and white lace mantillas flowed high from the women' s immobile coiffed heads, as did fluffy plumes from the helmets of civilian and military authorities.

In the narrow city streets draped in flags and shawls, a hush followed the gigantic flower-covered silver float, borne by a couple dozen men, carrying the consecrated host.

Then, someone in the crowd would yell "viva!" and the faithful would cheer and applaud, as people watching from their apartments showered rose petals.

Incense and cotton candy also wafted through this village on the historic pilgrimage route "Camino de Santiago" in northern Spain, its main square framed by the ruins of its medieval castle and a couple of fake arches set up for the occasion.

It seemed that the whole population, in elaborate costumes, participated in reenacting the day nearly 900 years ago when King Alfonso I decreed that a feria should be celebrated here - the first official one in Spain, or so the narrator said.

Peasa n ts, princes and bishops watched soldiers perform dangerous balancing acts with swords until the gray-bearded king took off on a trotting white horse - only his majesty's wireless mike hinting at the 21st century.

Aside from the elaborate creches with St. John figurines in many courtyards, religion is hardly on display during the all-night party or the next day, when the protagonist is this northern Portuguese city's namesake wine.

A regatta of "rabelos," the boats that once transported barrels, sails from the Atlantic mouth of the Douro River to the historic center crowded with blue tile-covered buildings, Port flowing in profusion among the fans well before noon.

Knowing this, I secretly welcomed my friends' mournful announcement, a couple of hours past the midnight fireworks, that we should begin to walk home because their 4-year-old son was tired.

Swinging the last hits with my squeaking martelo among jubilant festa - goers, I thought again that few know how to party like Iberian saint celebrants.

IBERIAN HOLY DAYS: The festivals run for several days around specific dates: Madrid's San Isidro is May 15; Granada's Corpus Christi is the first Thursday following the eighth Sunday after Easter (in 2015, it will be June 4; in 2016, May 26); Porto's Sao Joao is June 23-24; and Belorado's Feria Alfonsina is the first weekend in June. 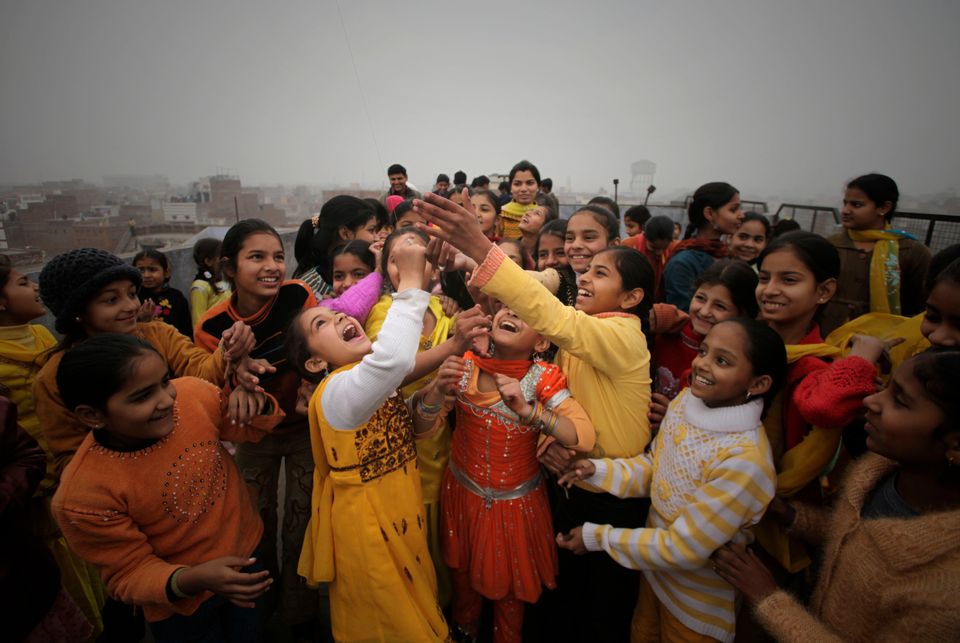 1 / 11
February 4: Basant Panchami
Do you like kite-flying? Then check out Basant Panchami, <a href="http://www.patheos.com/blogs/whitehindu/2014/01/vasant-panchami-happy-birthday-saraswati-hindu-holiday/" target="_blank"> a Hindu holiday</a> that celebrates the goddess Saraswati’s birthday. Saraswati is the goddess of music and knowledge, and her holiday is as much a celebration of education as a spring festival. Some children <a href="http://www.desicomments.com/desi/saraswati-puja/" target="_blank">learn to write their first words on this day</a> before making their ways outdoors to fly kites. The <a href="http://www.festivalsofindia.in/vasantpanchami/Puja.aspx" target="_blank">color yellow also plays a prominent role</a>, and celebrants wear yellow clothing, eat yellow sweets and exchange yellow flowers.
AP