IBM’s Watson is pitching in to tackle California’s drought.

The supercomputer, which may be best known for destroying human opponents in Jeopardy, has been enlisted by environmental consulting firm OmniEarth to track water use across California.

OmniEarth announced the partnership on Friday. But for over a month, the company has been tapping into Watson’s computing power to scan satellite and aerial images of California’s lush valleys and barren deserts to figure out how Californians are using their dwindling water reserves.

OmniEarth says Watson is valuable because it can track water use across the state at warp speed. Instead of laboring for several hours to scan 150,000 images, OmniEarth can tap Watson to process those images in 12 minutes, according to Jonathan Fentzke, chief strategy officer at OmniEarth.

“We can do the whole U.S., all 144 million parcels, in hours,” Fentzke told The Huffington Post.

OmniEarth provides its water use data to 90 local government agencies in California, including the City of Folsom and the East Bay Municipal Water District. The local authorities then use that data to draft water budgets and crack down on excessive water users in the area.

To get information about water use, Watson uses “visual recognition” to scan images of land parcels for valuable information, according to Pesenti.

But unlike less-powerful image detection software, Watson doesn't just identify a specific object -- say, a crop field -- in an image. Instead, it combs through lots and lots of information about the image -- like the objects it contains and the colors of those objects -- and uses that information to "understand" the image as a whole.

In the case of OmniEarth, researchers can use Watson not just to determine if a given parcel of land contains a crop field, but also to calculate the exact amount of water used by that parcel based on all of the information contained in the photo.

What's more, Watson doesn’t need to know much about water consumption to tell OmniEarth if people are using too much water. Using machine learning, Watson can scan lots of images and, over time, figure out what aspects of those images are most important.

“Watson doesn’t know anything about water usage or Earth images,”Jerome Pesenti, vice president of IBM's Watson platform, told HuffPost. “But if you give it some training images, the system can take those as examples and learn from them.”

That means OmniEarth can cut down on the amount of human labor needed to track water use. “Because of machine learning, we don’t necessarily need humans in the loop,” Fentzke said. “When when policy or other things change, we just automatically update it.”

With accurate, real-time water consumption data, OmniEarth says it can help water authorities develop customized water budgets for cities and towns based on how much water households, industries and farms are actually using. It can also help governments crack down on people or companies that flout water restrictions, according to Fentzke.

“It makes for more efficient outreach,” Fentzke said. “They can target messages to users who might not be aware that they’re overusing water.”

The company has already seen some early success in California. Thanks in part to Watson's super fast calculations, there’s been a 15 percent reduction in water consumption among some of OmniEarth's clients, according to Fentzke.

Reductions like that are a big deal in California, where water scarcity remains a major concern. While California announced on Wednesday that it would be lifting some water restrictions, water shortages continue to plague cities and counties across the state, especially in drier southern California.

Watson made its public debut in 2011, when it used its computing skills and ability to parse language to crush two Jeopardy champions. Since then, IBM has converted Watson into a cloud-based computing platform that anyone can pay to tap into. The platform's basic appeal is its ability to suck up huge amounts of raw data and convert it into useful information, according to Pesenti.

“There’s all this very unstructured information out there, and you need some tools to be able to extract understanding out of that information,” Pesenti said. “I think OmniEarth is a great example of how people can leverage the platform for their own needs.”

CORRECTION: An earlier version of this story incorrectly stated that IBM's Watson has defeated humans opponents in the game "Go." It has not. Google's DeepMind supercomputer has bested humans in "Go," however. 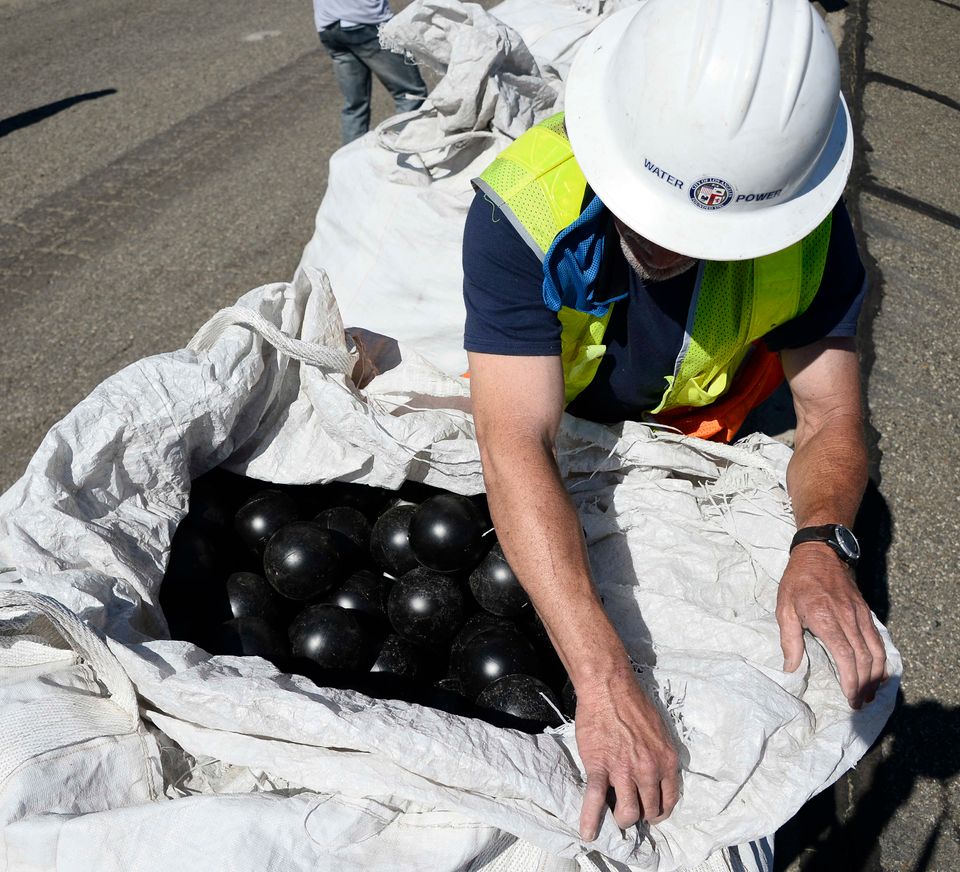 1 / 10
An employee of the Los Angeles Department of Water and Power opens a bag of shade balls.&nbsp;
Gene Blevins/Zuma/Corbis