With his hit shows "Drake & Josh" and "Zoey 101" coming to an end, Dan Schneider was focused on his next project. The new series starred "Drake & Josh" alum Miranda Cosgrove as a girl making her own web series with her best friends, played by Jennette McCurdy and Nathan Kress. After debuting in early September 2007, "iCarly" opened to strong ratings and never looked back, eventually overtaking "SpongeBob" as the network's most-watched show.

Schneider recalled the experience on his blog:

I never dreamed the audience would embrace "iCarly" the way it has ... within less than a year, we saw "iCarly" become more than just a successful show. Thanks to the fans, "iCarly" became part of American pop culture.

"iCarly" ran on Nickelodeon for seven seasons. The series received critical acclaim and even drew huge celebrity guest stars like Emma Stone, Jack Black and Jimmy Fallon on its way to becoming one of the Nickelodeon's most successful shows of all time. Fan's loved the series' interactivity, but now, even two years after series finale "iGoodbye" aired Nov. 23, 2012, there is still a lot viewers don't know. 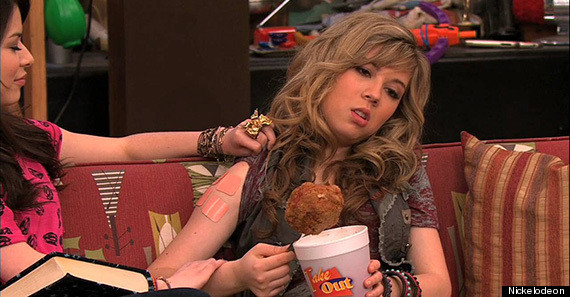 On the show, Sam eats pretty much everything she can get her hands on, but McCurdy told RadioFree.com that she definitely differs with her character there:

There are times when I have had to eat food that I hate, like for example the pie. Or on the first episode, I had to eat so much ham I threw up, and then had to go eat more. That was horrible! I had to eat Cheez Whiz ... Didn't like that.

The actress said the props department worked hard to make the food great, but she revealed to Rosie O'Donnell in a 2012 interview that she hasn't had ham since the first episode.

According to iCarly Facts Tumblr, the episode "iLost My Mind" gives out an actual working number for Sam Puckett.

Calling the number "503-664-0452" connects you to a voicemail message from Sam basically saying to hang up because she'll never check her messages.

One of the greatest mysteries from "iCarly" comes in the episode "iGot A Hot Room." In one particular scene, Carly mentions an infamous incident with a goat at a petting zoo.

Schneider wrote in his blog that he gets asked a lot about what the goat actually did to Carly, sometimes even by Cosgrove herself, but that it will probably always remain a mystery:

When we wrote that script, the writers and I had fun thinking about things the goat might have done ... but we all had different ideas. And, as you know, it was never stated in the episode. So, this one is up to your own imagination. There is no correct answer. It's anyone's guess.

When answering fan questions about how he decided on a name for the series, Schneider said it came from talking with Steve Molaro, who's now executive producer for "The Big Bang Theory." The show creator said the main character's name in his original script was Sam. That would have been Carly's name, except the URL for iSam was already registered. Schneider said he then bought the URL for iJosie.com, but he later decided on iCarly.

Had Schneider been able to buy iSam.com, Carly and Sam would likely have been Sam and Kira, respectively, which were the characters in the original script.

Whether it's Disney movies or Nick, a lot of kids programming has been shown to have hidden adult humor in it, and "iCarly" isn't any different. Smosh outlines a lot seemingly innocent jokes that could be taken to have a double meaning. Others more blatant examples are the "Fifty Shades of Grey" reference above and Freddie's apartment number, which you can see in this scene from "Sam & Cat" bares a striking resemblance to certain texting emoticon:

"Drake & Josh" references are scattered throughout "iCarly." Examples include Carly and Spencer (Jeremy Trainer) both watching themselves on "Drake & Josh," visual references like pictures and even this gem from Drake Bell, which appeared on the episode "iBloop":

Before "iCarly" debuted, there were also references to the show in "Drake & Josh." Most notably, a movie marquee in "Drake & Josh: Really Big Shrimp" had a message from Schneider thanking Molaro and also saying, "Now She's Carly."

Fans could actually go on iCarly.com to send in videos, suggestions and interact with the show. The "iCarly" writers then incorporated fan feedback into the programming, which made the show a very real experience.

Cosgrove also told Kimmel that in her spare time she makes funny videos with her friends, which basically means she's Carly Shay in real life, too.

Though the Shay's supposedly live in Bushwell Plaza in Seattle, the actual building seen on the show is nowhere near there.

A variety of sources report exterior shots of the Shay's apartment building are actually from the Eastern Columbia Building in Los Angeles. Images of the building are said to be digitally altered for the show.

To win a bet against Freddie in "iFence," Sam reads a book called "The Penny Treasure." Previously, she hasn't been interested in reading, but Sam learns to enjoy it and describes the experience as "TV in your head."

In real life, "The Penny Treasure" doesn't actually exist. Apparently the book used in the episode was a copy of "Harry Potter and the Deathly Hallows" with a fake cover put on it.

Since the show is all about a girl and her friends making a web series, a variety of other made up websites are also mentioned. These include iGibby.com, Nevelocity.com, SamPuckett.com and many others.

You can actually visit these sites, but Carly's nemesis Neville will probably "rue the day" when he finds out that these sites are all set up to redirect to iCarly.com.

Schneider wrote on his "iGoodbye" blog entry that he knew how he wanted the series to end from the very first season, and that's exactly how it turned out:

I had this vision of the front door opening, Carly hearing her dad's voice, turning, breaking into a huge smile, yelling "Dad!" and running into his arms. I saw that scene in my head back in 2008. So, it was kind of surreal when we filmed that very scene, in 2012.

Child Stars: Then And Now