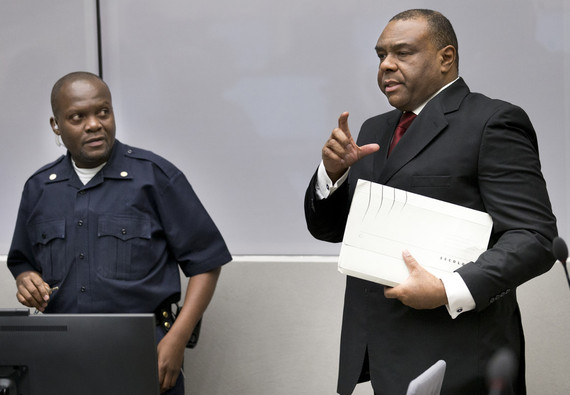 March 21 2016 heralded the first conviction for crimes of sexual violence at the International Criminal Court (ICC) in the Hague. The case was against Jean-Pierre Bemba Gombo. Bemba, a citizen from the Democratic Republic of Congo (DRC), stood trial as president and commander-in-chief of the Mouvement de libération du Congo (MLC) and was convicted of five counts of murder, rape and pillaging, amounting to war crimes and crimes against humanity.

Bemba was found guilty for failing to prevent and stop crimes committed by MLC soldiers in the Central African Republic (CAR) from 2002 to 2003. The MLC had been invited to enter the CAR to assist former President Ange-Félix Patassé to fight against an attempted coup d'etat.

The Bemba conviction is hailed as a landmark case for two reasons. The case marks the first time that the concept of command responsibility has been used by the ICC. Also, the charges focused on the use of sexual violence as a weapon of war.

While the case is hailed as significant for the court, it would be prudent to exercise caution when calling this a historic victory. A dose of perspective is needed.

The recognition of sexual and gender-based violence has steadily developed in international law. While there were no specific prosecutions for these types of crimes in Nuremberg, the judges denounced the use of sexual violence as a form of torture. At the Tokyo tribunal there were specific prosecutions that recognised the systematic use of 200,000 so-called "comfort women' as sexual slaves by the Japanese military.

There have also been critical developments in the Yugoslav and Rwanda tribunals. According to the Yugoslav tribunal, almost half of those convicted have been found guilty of elements involving sexual violence. The Rwanda tribunal became the first international court to find a person guilty of rape as a crime of genocide.

All in all, international tribunals have widened recognition of sexual and gender-based crimes so that they fall under the umbrella of genocide, crimes against humanity, persecution, enslavement, torture and other inhumane acts.

The wider implications of the case can be divided into two categories: the known and the unknown.

What we know is that the verdict itself is an international act of retribution - the view that proportional punishment should be meted out for every crime. Whatever the consequences, justice must be done.

We also know that the ICC has re-committed itself to pursuing further cases dealing with sexual violence. This was demonstrated most recently in the confirmed case against Dominic Ongwen.

But we do not know the extent to which this decision will have any real impact in halting the sexual violence being perpetrated in the CAR and in other conflicts on the continent.

We also do not know if it will lead to a change in attitude of the civilian and military leadership controlling armed groups. One should be deeply sceptical about assuming that these individuals will now suppress a culture of savage violence and ill discipline among their ranks.

The deterrent effect of international law remains ambiguous and unproven. Value may lie in the message from the court rather than any hope for real world change.

As a civilian and military commander, Bemba was held criminally responsible for atrocities committed by his soldiers that targeted the civilian population. The judges made clear that despite his lack of presence on battlefield or at the crime scene, Bemba knew that his "Banyamulengués" were committing crimes. The judges concluded that, as the commander with effective authority and control, Bemba had failed to take all necessary and reasonable measures within his power to prevent or repress the actions of the MLC.

ICC Prosecutor Fatou Bensouda released a statement that serves as an unequivocal warning for those in positions of command or authority:

They cannot take advantage of their power and status to grant to themselves, or their troops, unchecked powers over the life and fate of civilians. They have a legal obligation to exercise responsible command and control over their troops.

Put simply, they cannot wash their hands of responsibility.

This is a powerful message that the ICC, as an institution, needed to send. The court's relationship with Africa has been tumultuous, with claims of a biased prosecutorial strategy against Africa and charges that it represents a neocolonial tool of intervention. Ultimately, the ICC needed a good Africa story.

In the DRC many eagerly awaited the release of Bemba and there were predictions that he would make a return to the political stage. He had once been a presidential candidate.

There is no doubt that on a regional level the conviction will come as a welcome victory for some and a shock to others in the CAR and DRC.

Many had believed that Bemba was beyond the reach of the law. The signal from the court may go some way to ruffling the feathers of individuals in positions of civilian and military leadership who themselves are suspected of committing atrocities.

As the first case in the institution's history dealing with command responsibility, the conviction should be welcomed as progress.

Sexual and gender-based violence has featured heavily in the conflicts under investigation at the ICC but been under-represented in terms of prosecutions. In a 2015 report by the UN Secretary General to the Security Council, cases of conflict-related sexual violence were documented in the CAR. Further evidence revealed that these crimes were being systematically perpetrated by armed groups.

Condemning the use of rape as a weapon of war is neither unique nor limited to the work of the ICC. The deeper question arises of what impact international justice can have in dealing with sexual and gender-based violence in conflicts.

Bemba's conviction serves as a reminder that international justice lags woefully behind the atrocities themselves and may do very little to address the physical, psychological and social impact on the victims' lives.

As one victim told the court, being raped has left her stigmatised in the community because she is known as a "Banyamulengué's wife" .

Given that it has taken the ICC nearly 14 years to get this far, the conviction should be viewed as making a significant yet modest contribution in the campaign for justice.

If sexual and gender-based violence are to truly become a global priority, then the ICC must be consistent and expedient in dealing with these crimes.

While more than 5,000 victims were able to participate and express their views through their legal representatives in the Bemba case, countless others have been subjected to past and current victimisation. The Bemba case comes too little or too late for countless more victims in the CAR.

This case spotlights the limits of international prosecutions. To counterbalance this, the situation much closer to victims must be addressed.

Sexual and gender-based crimes are intensely personal yet cause irrevocable individual and societal harm. Justice will only truly be done when we accept that victims of sexual and gender-based violence in Africa should not bear the shame and stigma that society imposes on them. And when we acknowledge that serious sexual, mental and physical violence deserves redress beyond the courtrooms of the Hague.

So, while the Bemba case is a small step, the giant leap has yet to come.