A deadly cold spell has gripped much of the Eastern United States in the wake of a stormy “bomb cyclone” lashing the Atlantic Coast with snow and high winds as it charges north. Meteorologists warn that parts of the country could be dangerously sheeted in ice as the fierce cold continues through the weekend.

The weather system, “one of the most intense western Atlantic winter storms in decades,” will plow into eastern Canada on Friday, according to The Weather Channel. At least 17 people have died as a result of the cold in recent days.

The storm has wreaked havoc in parts of New England and beyond, with blizzard conditions and freezing temperatures causing widespread power outages, school closures and flight cancelations. It dumped more than a foot of snow in parts of New Jersey and New York, and caused flooding in the Boston area and in parts of Maine. Snowfall reached as far south as Tallahassee, Florida, for the first time since 1989.

The National Weather Service on Thursday cautioned Boston residents against “going out and floating on icebergs” drifting through streets swollen with slush and floodwaters.

Here’s @kathrynburcham showing why she’s the best in one the business, floating on an ice berg to provide updates .. @boston25 pic.twitter.com/iPJf9EUiv4

The cold’s toll includes animals. Dead sharks have been washing up on beaches in Massachusetts. Some have frozen, while others have been trapped in shallow waters in Cape Cod Bay, according to the Atlantic White Shark Conservancy. Dogs and other pets left outdoors have also fallen victim to the frigid temperatures.

Niagara Falls was transformed into a scene out of Narnia, with chunks of ice crystallizing and creating a stunning spectacle.

The snowstorm has been widely referred to as a “bomb cyclone,” a meteorological term describing a powerful cyclone that gets energy from rapidly dropping pressure caused by colliding hot and cold temperatures. The storm on Friday was subsiding in most of the East. But the “arctic outbreak” will continue, the National Weather Service warned.

“A surge of arctic air will spread over the region in the wake of the storm, producing well below normal temperatures and dangerously low wind chills through the coming weekend,” the weather service added.

❄️High winds from the winter storm bearing down on the East Coast push large chunks of ice into a dock on North Carolina's Outer Banks Wonder if @algore is liking the cold weather that 48 States are experiencing brrrr ❄️pic.twitter.com/PMDEzDO102

New York Mayor Bill de Blasio on Friday encouraged people to “stay warm, keep an eye out for neighbors, and bring pets inside.” The wind chill will make it feel as cold as 20 degrees below zero this weekend, he added.

In Boston, floodwaters are freezing, locking parked vehicles in place on streets. 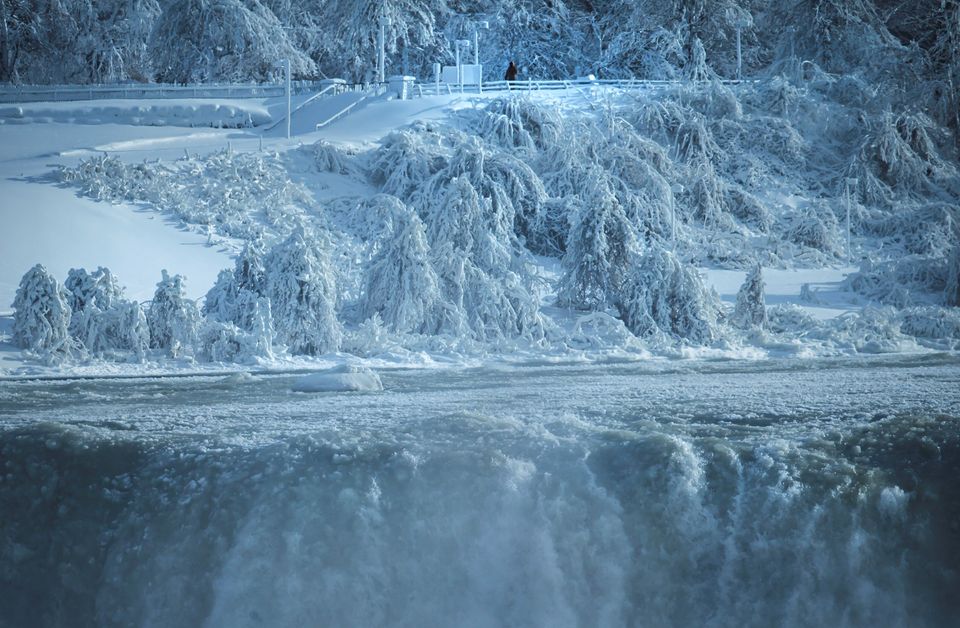 1 / 13
A lone visitor on the United States side of the Niagara River watches as ice chunks and water flow over the brink of the Horseshoe Falls in Niagara Falls, Ontario, Canada, Jan. 3, 2018.
Aaron Lynett / Reuters