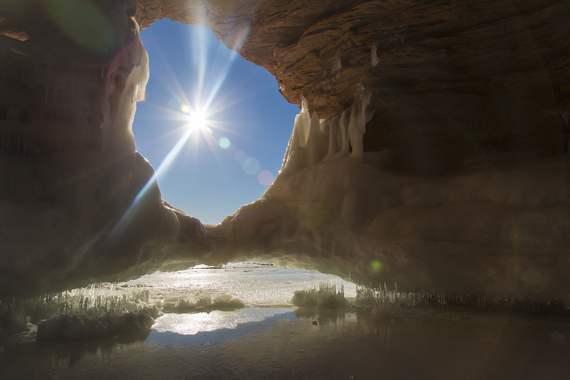 The Apostle Islands Ice Caves near Meyers Beach, Wisconsin officially opened up for the season on Saturday Feb. 28th. The National Park Service (which administers the logistics of visitation) listed a count of at least 7,000 first day visitors on their Facebook page.

For many in the Northeast, Winter '15 has been a nightmare of snow, ice, shoveling, more snow, more ice and even more snow; but with great hardship sometimes comes unique opportunities. For the second year in a row the temperature on Lake Superior has been cold enough to lock in an ice sheet over a foot thick in front of the Apostle Islands Sea Caves, transforming them into the now infamous "Ice Caves." 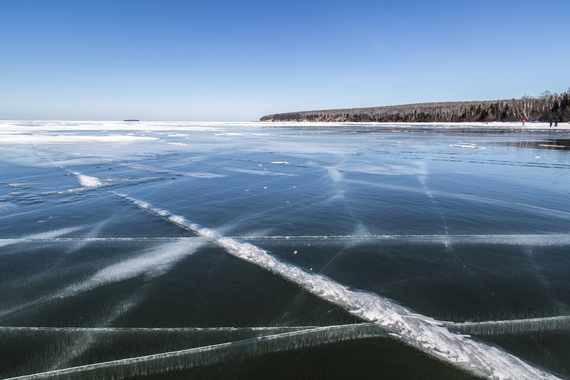 The hike to the red sandstone cliffs covered in Mother Nature's icy art is about a mile from the Meyer's Beach stairs. Walking on slick transparent ice is made much much easier with a good set of ice cleats.

It's Thicker Than it Looks! 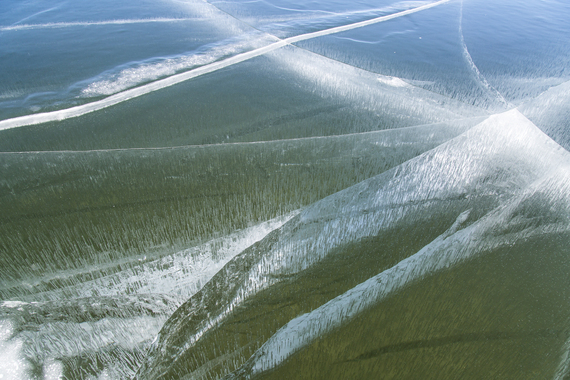 Ice is kinda crazy. Right now you can look straight through transparent ice on the hike to the Ice Caves, seeing all the way to the bottom of the Lake in some areas. This can be disconcerting if your biggest fear is collapsing through the ice to your very own polar bear plunge. To get reassurance find a set of cracks that give contrast to the ice and you'll get an idea of how thick it really is. It's thick! 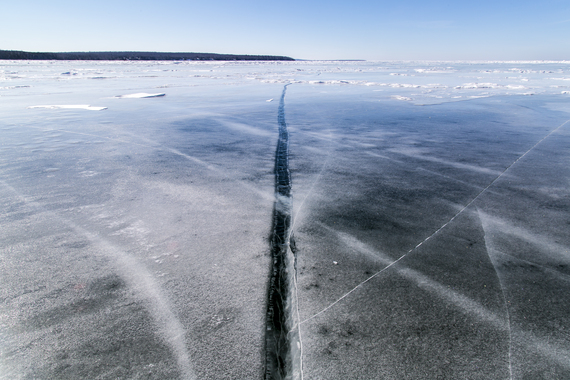 The ice sheet you're walking on is dynamic -- safe, but dynamic. It bends, adjusts, and takes energy from the world around it; also, it makes noise. From deep bass tones that sound like a whale hiccup to full on cracking sounds. Don't be alarmed, that's natural. Ice sheets would have their own page in the children's book Everyone Farts. 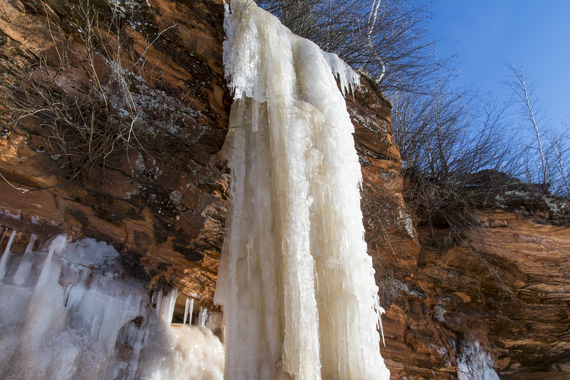 As if time had stopped, these frozen waterfalls are one of the many macro-formations at the ice caves. 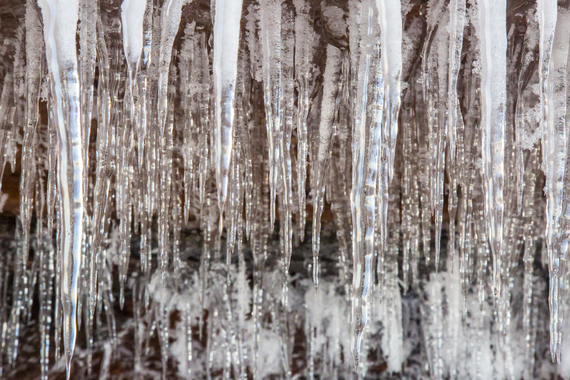 Recurring freeze/thaw cycles produce icicles (tens of thousands of them), not dissimilar from those on the eaves of your house. 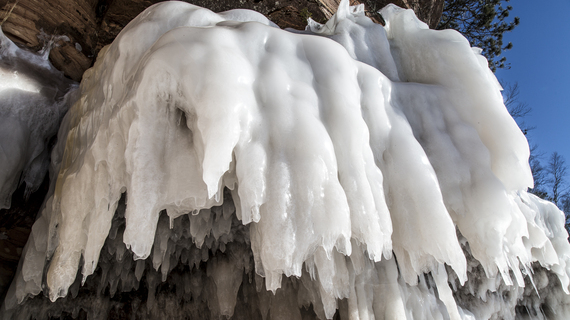 You'll notice that the ice formations come in a range of different colors and hues (and some are crystal clear). Impurities in the ice, dissolved minerals, speed of freezing, and colored rock particles in the ice can all affect the colors you see at the caves. 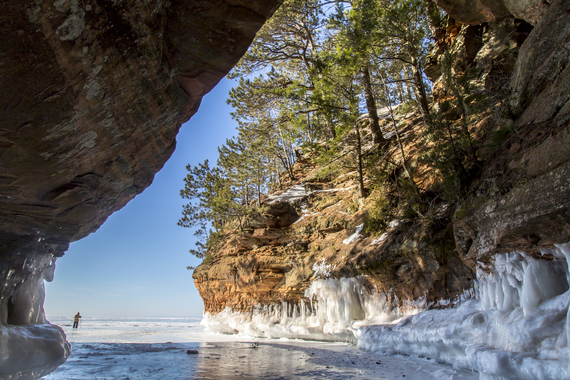 The caverns and crevices that form the foundation of the Ice Caves have been sculpted through the wind/water/ice erosion of red sandstone cliffs which abut Lake Superior. 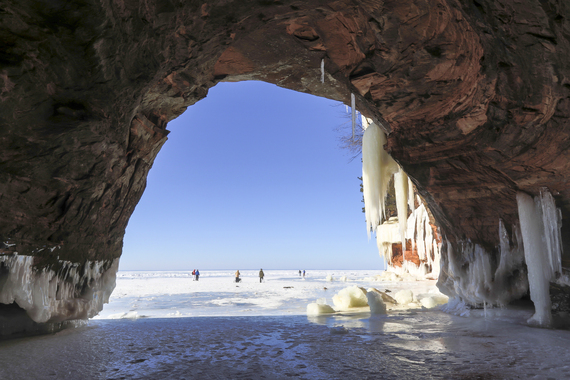 One of the greatest things about the Ice Caves is their variability from year to year. Every winter has it's own physical and meteorological characteristics that determine what the ice caves will look like and how much of the sandstone will be covered in Ice. 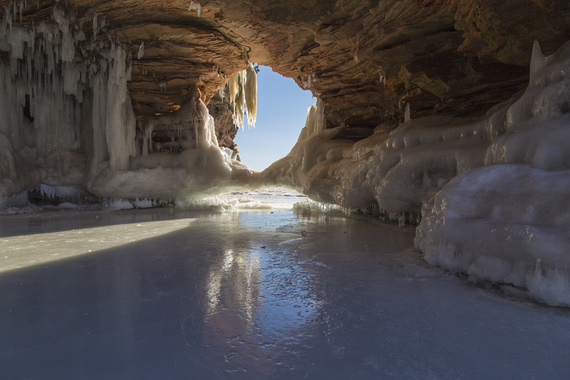 A selfie by the arch hole of ice and stone is a must.

That Weighs a Ton! 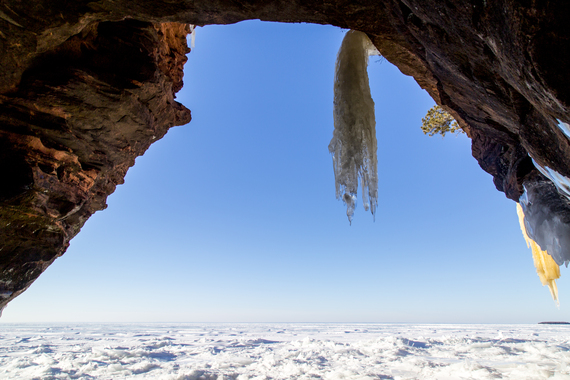 Ice is heavy! In the interests of personal safety I strongly encourage everyone to always keep in mind where they are standing when visiting the Ice Caves (and more importantly, parents, please watch where your children are standing). Enormous chunks of ice literally weigh a ton(s) and they are all eventually going to fall, it's just a matter of time. 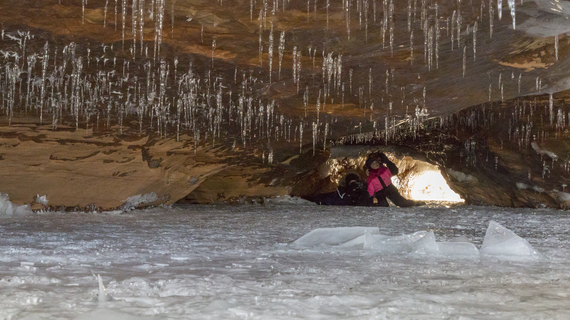 The frozen lake-scape produces tunnels, crevices, and ice chambers that are just too inviting not to enter. Just try to keep in mind that your body is larger than you think it is (that's not a crack at your diet success), so you have to be careful not to inadvertently damage the formations. 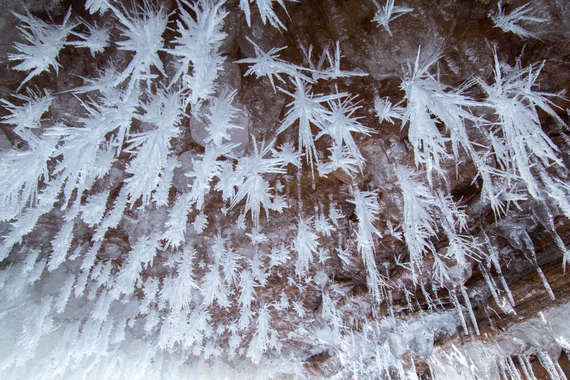 When water condenses out of the air in just the right conditions onto already frozen 'seeds' the resulting formations can appear unearthly, and beautiful. 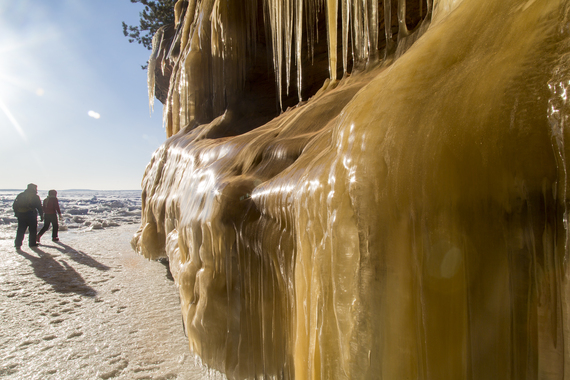 If you asked me what time of day is best to visit the Ice Caves, I'd say the later portion of the afternoon (on a sunny day). Afternoon sun bathes the caves in a warm light, brightening the sandstone in red hues, and allowing the ice to glisten and glow.

Ice Does the Darndest Things 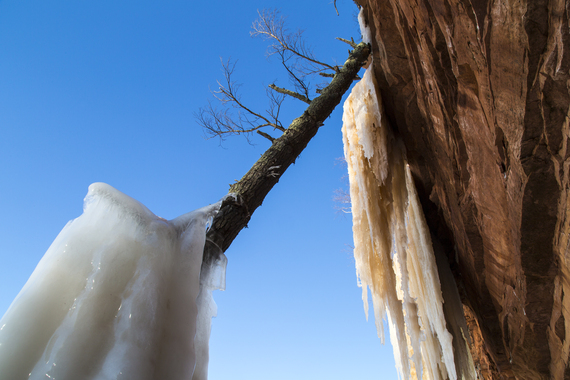 This tree took the year's prize for strange things trapped in ice. I assume (although this is just my theory) that the tree was hanging out towards the edge of the cliff and as the ice built up and slid off the edge it took the tree with it. Either that or aliens put it there. 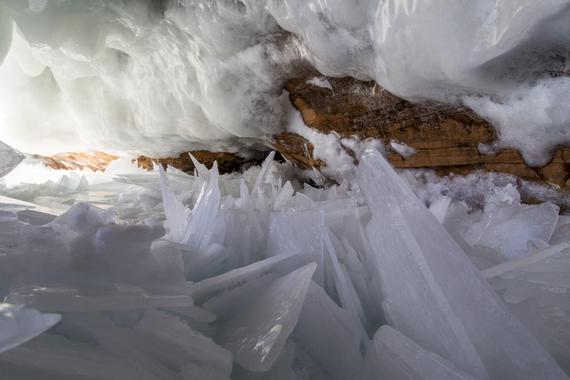 No two visits to the caves are the same, and no two days on the ice present the same face. In a few weeks it'll all be gone and another year will go by before we know if the caves will freeze up once again. 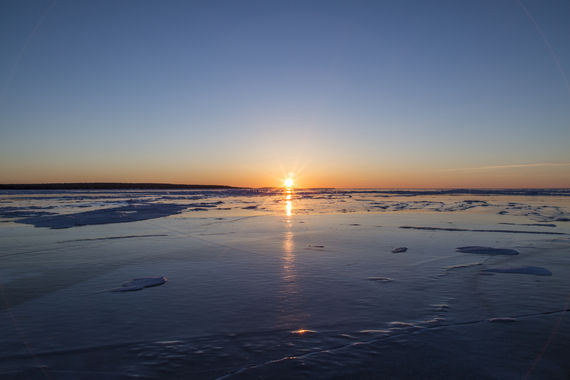 Disclaimer: Visitor volume has its consequences. Visitors to this year's Ice Caves are unlikely to see many of the micro-formations seen in these photographs. On the 28th when the Ice Caves officially opened, poorly parented children and immature adults began to knock down many of the ice formations, anything that was breakable. Some of these structures can reform in a matter of days given ideal conditions, however the scar of visitation is very apparent. The difference between how the Ice Caves appeared before they were 'opened' on the 27th and after 7000+ visitors passed through on the 28th was stark.