One ice climber is lucky to be alive after what looks like a nearly fatal fall during a climb in Colorado recently.

Not a lot is known about a viral video that is making its way around the Internet depicting an ice climber who very likely would have fallen to his death if it were not for the help of his fellow climbers.

The climber, near the summit of his climb, finds himself in a difficult situation. The ice that he is climbing appears to be melting and thinning near the top of the rock face -- turning from ice sheet to waterfall, rapidly.

Around 32 seconds into the video, a climber off camera says, "shit, he's loosing his..." referencing that the climber in view is running out of ice to stick his picks into. Then just moments later, the climber has his first slip and screams momentarily. He's able to hold tight and wait until his fellow climbers throw him a line.

The climber in view clips the line to his belt, and just in time too, just before the thin sheet of ice gives way about a minute later -- watch the heart-stopping video above to see for yourself.

Although it's not entirely clear where the video was shot, it is called "Ice Climbing Kennedy Gully" and Kennedy's Gully is a section of the Ouray Ice Park in Colorado. According to PlanetMountain.com, the fall the climber would have faced was at least 50 meters below him.

"Come and rest," an unseen female climber says off camera. "I still got you. It's okay. There's water right there. Take a deep breath when you get here."

PHOTO GALLERY
Jon Kedrowski Sleeps On All Of Colorado&#039;s Fourteeners 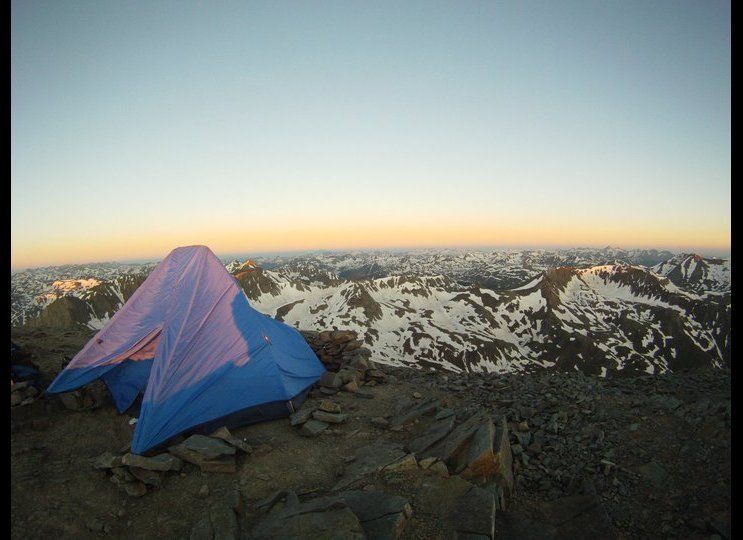