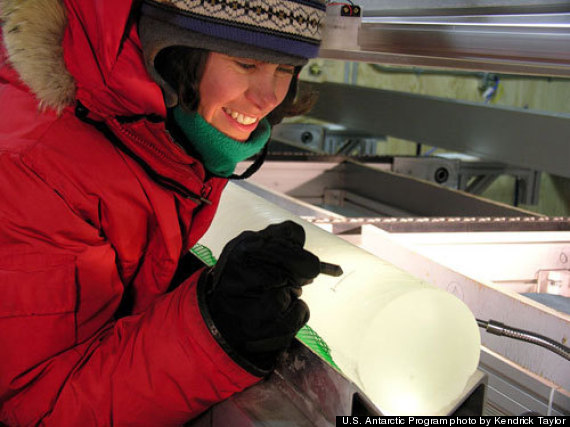 The U.S. Antarctic Program (USAP) has drilled and recovered its longest ice core to date from the polar regions, officially hitting 3,331 meters.

Inside the National Ice Core Laboratory in Denver rests more than 11 miles (18 kilometers) of ice, drilled from Earth's glaciers, which are shedding new light on the dimly understood history of the planet's climate.

These ice cores, taken from both Antarctica and the Arctic, provide a unique glimpse into the past. Scientists take pieces of the ice to perform a wide variety of experiments.

Some scientists study the bubbles trapped within the cores — each a tiny pocket of air enclosed at the time the ice formed, essentially frozen in time. Testing that air for various chemicals can tell scientists a lot about what the Earth's climate was like at the time the bubble formed.

Other researchers look at levels of chemicals that can reveal how much precipitation fell in any given year. The samples also contain particles of volcanic dust that speak to Earth's geologic past and its potential influence on climate. [Video: Ice Cold Science Heats Up Climate Debate]

Laboratory manager Mark Twickler likens the ice core layers to tree rings because each layer represents a year of weather, just as each tree ring represents a stage of growth. "The unique thing about polar glaciers is that each year brings another layer of snow," he said in a statement. "There are times where it snows less for a couple years, and then it snows more."

By looking at the composition of the snow, scientists can "tell what the temperatures were, how rough the oceans were around Antarctica, and even how dusty it was in Australia," Twickler said. "It's basically like looking at a weather report, year to year, going back in time."

The facility itself is kept at minus 10 degrees Fahrenheit (minus 23.3 degrees Celsius), so workers inside bundle up as if they were in Antarctica, where many of the samples were drilled, into a 70,000-year-old portion of the West Antarctic Ice Sheet. Researchers drilled down more than 2 miles (3.2 km) to retrieve the oldest pieces of ice in the sheet.

U.S. Geological Survey scientist Joan Fitzpatrick is looking at samples from the West Antarctic Ice Sheet to research how these masses of frozen water respond to changing climate. To do that, she creates thin wafers of ice from the core and then places the wafer samples under a microscope to analyze individual ice crystals.

"If the climate is warming, is the ice sheet going to get thinner overall?" she asked in a statement. "We really don't have a good handle on how the ice sheet as a whole will respond in a changing climate." But the samples at the lab allow scientists to compare recent data with more long-term information, to discover the impact of our behaviors on the climate.