"One day, Annalise and I were in the [scoop] shop and a customer came in and said, ‘There's a calf running in the middle of the street!’ The two of us go running outside, I got that calf by the neck and Annalise comes up behind it... and it goes to the bathroom all over her. And then the calf swings, and it's all over me. We had to shower and change. It was everywhere."

Welcome to a typical day at Flayvors of Cook’s Farm, an ice cream shop in Hadley, MA. Take a few minutes talking to Debby Cook, the woman who runs the shop, and you'll find there’s a lot more that goes on at this establishment than scooping ice cream. While your typical ice cream shop might be ubiquitous in New England -- there are more of them than clover flowers in a summer field -- Flayvors is nestled between 120 dairy cows and three old wooden barns on the property of Cook’s Farm, a three-generation dairy farm that’s a beloved gem in the community. But it took a lot of work to earn that reputation.

For most of us, an ice cream shop is a moment's thought, a quick indulgence, a summer treat. But for the Cook family, it is their entire life. ”You know that saying, ‘[Man may work from sun to sun, but woman's work is never done?] Well, it's that way here, only it's a farmer's work," says Beth Cook, who also works on the farm. "Because even on a rainy day you've got to fix the plow, so when the sun comes out, you can go plow. Or, you've got to help your wife make shelves in the store. The door knobs need mending, the locks are all jamming in, the picnic tables are breaking."

The family operation all started with Pop -- full name, Gordon Cook -- who was born on Cook’s Farm. In fact, he was born in the same room he passed away in 10 years ago. “When pop was 90 we'd send him out to pick up things for the store. He'd just get in that little truck of his and just zoooooom,” Beth recounts. “I think that's part of the reason he lived to 92,” Debby chimes in. “There's always something to be done.”

Tired is an understatement. Debby ran down a list of the daily chores at the dairy farm, and just hearing her recount a day-to-day is exhausting. The morning starts with a check of the barns and cattle at 5 a.m. to ensure nothing’s amiss. Milking starts at 6 a.m. -- 10 cows at a time if all goes well, and there are 120 cattle to attend to. Once the milking’s done, the barns need cleaning. There are three barns and they are not small. Then, the cows need feeding. If one of them isn't well, they're taken care of (the Gordons are also trained to provide the cattle with healthcare). At 3 p.m., it all begins again: Milking, cleaning and feeding. And that’s not even touching upon the fields that need plowing or the fences that need mending, or anything that goes into producing the goods of the ice cream shop.

The daily chores are grueling and messy; not just anyone can do it. Not even some of the people living on the farm itself. Beth married into the farm back in 1974 and never imagined herself milking cattle. But that’s exactly what she did for 15 years, until she was able to escape to the scoop shop. She responded to the labors of barn work the way many of us would, saying to herself, "'I know that god didn't put me here to do this.' I'd have cow poop all over my face and I’d say, ‘I know I wasn't supposed to do this. He didn't tell me I was supposed to do this." Clearly, working a dairy farm is not all fresh milk and ice cream cones. 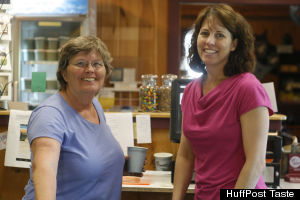 In 1998, mother and daughter-in-law Beth and Debby opened Flayvors of Cooks Farm, the scoop shop, which not only makes a mean cookies-and-cream flavor, but that also sells raw milk straight from the dairy, if you’re smart enough to ask for it. (According to Massachusetts law, raw milk has to be kept behind the counter so that no accidental purchases are made.) The shop was started not only because both women always dreamed of having an ice cream stand on the farm -- they each spent summers scooping in their teenage years -- but as a way to accommodate the expenses of the growing family. When the shop opened its doors, Debby had her first child in a playpen behind the counter. When her second child took that spot, the first took post at the cash register ringing up people’s orders as she was learning to speak. When you live on a farm, you work on a farm, no matter what age you are.

The first years of any business require total devotion, especially in the service industry. Multiply that by about 120 and you've got a better idea of what it takes to open a shop while running a farm and starting a young family. But fatigue and hard work aren't a deterrent. One of Flayvors' most popular ice cream flavors, Pistachio Chip, was an accident that resulted from total exhaustion in the early years. Through her groggy eyes, Debby thought the pistachio was mint, she added chocolate chips, and a favorite flavor was born. Another time they added Oreos to the ice cream machine too soon, and what resulted was a gray mess. A tasty mess, but gray ice cream nonetheless. Not letting that deter them, they turned it around and sold it as the Great Grey Mistake.

"And then people will have requests," says Debby, a.k.a. the ice cream fairy. "I had several requests for Grape-Nuts ice cream, so ended up making a half batch for those people." 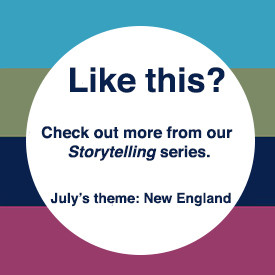 While Debby is the muscle and brains behind Flayvors, Beth is certainly the soul and spirit. “I just do what I do, that's who I am. We have asparagus ice cream. We've got a line of people here, so I get a plate and put a bunch of spoons on it and ask, ‘Do you want to try asparagus ice cream? No? Oh, you big chicken,’” Beth recounts, laughing. "That’s pretty much the tone you feel walking into Flayvors. It’s fun-loving and playful. And that's part of the reason folks make the journey to the farm. That and the Cookies and Cream."

Cook’s Farm isn't just a dairy farm and ice cream stand, it's also an option for the residents of the community to eat and support locally. And the family makes it a point to do the same, working not only locally but with family-run businesses like theirs. They’ve found that’s where the heart resides within the industry. “The biggest person that supplies us with our ice cream items is in Massachusetts. He's the owner, the person who runs everything, and the person who takes our orders every week. One time he met me on Route 2 halfway from Boston at 9:30 at night, because we were out of ice cream cones. It was just unbelievable,” Debby recounts.

Similarly, standing on Cook’s Farm is like being transported back to the 1950s, when families came first and personal relationships meant something. But that return to simplicity is not without consequences. The farm is small time in this day of Big Ag -- it certainly feels the competition -- and business isn’t guaranteed. “The worst part for me is that the future is so uncertain,” confides Debby. “It's different from other jobs, where you're going to get a raise. The market is dictated by so many outside factors that no matter how well you do your job, it does not matter.

"You always have the risk that we could lose it all. And you just got to keep plugging away. You just keep your head down and keep going. Hank's favorite quote is, ‘A long, hard day sure ain't much fun, but you've got to get it started if you want to get it done.’ It's that old Aaron Tippin song. He says it all the time. He's like, ‘If you stop and think about it, you're going to get so overwhelmed. Just put your head down.’

"And I think that's probably the hardest thing. Certainly as a mom you know that's really hard. You know, my daughter's looking at colleges and I've already told her she's not going. She needs to go to community college first because we can't afford that.”

A farmer's future is one encompassed with risk, but they're willing to take the gamble for the rewards the farm life sows. Beth knows how lucky she is as a grandmother to be able to live on the same property as her five grandchildren. And then there are the folks who frequent Flayvors who she's come to know and cherish. “When I look at how old those kids are, I remember when Mary [the eldest grandchild] would punch the register. People come up to me now and say, ‘This is my daughter,’ and I think, ‘What? You have a daughter? I remember when you were a little baby.’ It's just amazing to be a part of the community like that."

At the end of the day, a toddler holding a stuffed dog under one arm and a cup of ice cream in the other, walks by and timidly waves after Beth greets her in her boisterous, warm-hearted voice. "Hi, hi," Beth chirps. "One for the stuffed dog and one for you." “You see,” says Debby, “That's the best part. When you have a two- or three-year-old that says, ‘This is the best ice cream I've ever had in my life.’ Really? It hasn't been too long [that they’ve been alive], but I sure am glad we made the list.”

Here's a look at Cook's Farm, courtesy of Debby Cook who also happens to be a great photographer.