It's not surprising that many tourists' memories of Quebec are gastronomical. I added another one after visiting Vieux-Levis (Old Levis), a city on the southern shore of the St. Lawrence.

A friend at home insisted that my husband and I visit Glacerie a L'Europeenne, an ice cream shop with seductive soft-serve. So we took a mid-morning ferry ride aboard the M.V. Alphonse-Desjardins, one of two boats that shuttle between the terminals at Place Royale in Quebec City and historic Vieux-Levis across the river. The breezy boat ride passes far too quickly during summer.

After disembarking, we stopped at the tourist office to ask for directions. A friendly bilingual guide told us to walk a couple of blocks until we reached the steep wooden steps built into the side of the mountain. We stopped counting after 100, but kept going upward and onward. The day was hot so it felt as if we were climbing a stairway to heaven.

Once we reached the top landing, we stopped to gaze back at the spectacular river views beneath us and asked a couple of cyclists for directions from there. "Only a few more blocks up the hill," one said. We crossed several residential streets and turned left on avenue Begin, the commercial district in the heart of Vieux-Levis. The line for the shop snaked from the counter to the street with hoards of local children and their parents, young people with bike helmets, and tourists with backpacks.

The choices of gourmet ice creams and sorbets, all of which are made on premises, are mouth-watering. Soft-serve cones come in five sizes (tiny ones for tiny kids--and big ones for big gluttons), dipped in milk chocolate (lait) or dark (noir). We ordered mid-size ones (politely referred to as petit) for about $4 each and savored every bite on the sunny terrace outside. The ice cream parlor shares a Victorian house with an equally colorful chocolate shop, Les Chocolat Favoris, owned by the same family. 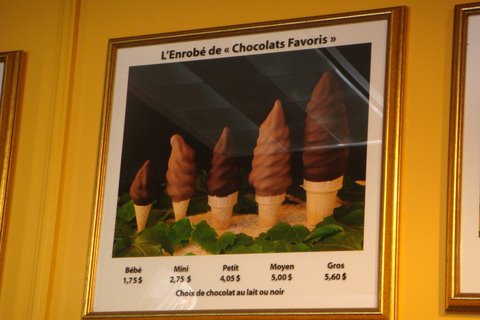 Satiated, we ambled downhill back to the ferry terminal passing one-of-a-kind Victorian Gothic homes, relaxing parks, and miles of bike paths on the Parcours des Anses. Perched on one of the benches on the deck of the ferry, we were drawn back to the sweeping views of Quebec City across the river: the green-roofed Chateau Frontenac perched high up on the hill, the city's magnificent stone walls, and the parade of cruise ships along the waterfront. The short jaunt was a memorable treat and at least half the fun was getting there.

IF YOU GO TO VIEUX-LEVIS:

Ferry Schedule and Fares (also accommodates cars and bicycles):
The 10-minute ride costs about $3 each way, and operates both day and night.