... that a man could change tires all day long or drive an ice cream truck or run for Congress or cut into a man's guts in surgery or murder, this was all beyond me. I did not want to begin. I still don't. Any day that I could cheat away from this system of living seemed a good victory for me. 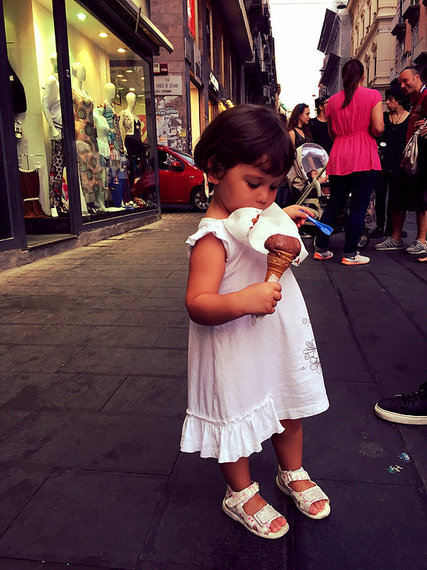 Across the street from the icecream shop on the corner, the one with the pale blue sign, a dog lies lazily on the sidewalk, in a rare spot of shade. He looks mildly interested, mildly annoyed, as I invade his space, but I scratch his ears, he wags his tail, and we become friends. We sit there, both lethargic, in the midday, midsummer heat. No collar around his neck, no place I need to be, from our vantage point we have front row seats for some icecream people watching.

At any given moment, in the shop across the street, there are as many stories unfolding as there are flavors of ice cream. Madagascar vanilla, amaretto, dark chocolate, lemon sorbet. Cherry cheesecake and pistachio. Wild berries, ricotta and pear.

The icecream people and their lives play out like snippets of different movies; light or dense, infused with liquor or coffee, with or without whipped cream. No two icecream people are alike, no two visits are the same, but all stories, without exception, begin in the same place and way. On the sidewalk, caught off guard by the most marvelous smell. For wherever they are heading, whatever lives they lead, icecream people always stop for warm waffle cones, just baked.

The first timers and tourists look somewhat alike; they come in from the heat dazed and confused, tongues and cameras sticking out. Spend hours experimenting with different flavor combinations, performing complex mental math, attempting to build the perfect icecream cone, to get everything just right. The result is big and very colorful, often with cream and toppings too. A tad too much, perhaps, but hey, carpe diem. They are, after all, on holiday.

The more seasoned icecream people, the regulars, walk in with a surer stride. At precisely the same hour every day, knowing precisely what they want. Their choice has been carefully studied over years, seasoned to taste, tailored to size. Like the old couple that shares the strawberry vanilla every day, in a medium sized cone at five. She licks the flurry peak at the top, he catches the runaways at the rim, oblivious to time and the world around them, every movement enjoyed and slow. They then have two espressos by the counter, in comfortable silence, and head out. Where to does not matter to this story; tomorrow they will be back.

Or the businessman in a slim navy blue suit who comes in at five to six, always on the phone, engrossed in serious conversation, his voice is dark and deep. He devours his double dark chocolate chip ice cream, with fudge, as he negotiates invisible deals. When they go well, the tall, intimidating man gets chocolate all over his face.

Or there is the lady who comes in alone, on the cloudiest day of the month. In the early morning, in her pearls. A white summer dress, rain or shine. She orders vanilla and owns her choice, savors it simple and pure. In the smallest cup, coffee on the side, a little biscuit on top. Sometimes she reads, often she just stares out the window thoughtfully. Then folds her napkin neatly and disappears, until the following month.

Then there are those who icecream for pleasure, those who icecream to fill a void. The social icecreamers, the end-of-a-first-daters, the ever-hungry teenagers, the gourmets. For some life and icecream are easy, for others they are extremely hard. My heart goes out to the unrequited icecream lovers who look in from the street outside.

But the real icecream people, the children, are my favorite to watch by far. With their nannies and puppies they run into the store, cheeks flushed from the afternoon sun. Grubby and giggling, they graciously share icecream with their clothes and hair. With their sticky white moustaches and rainbow sprinkles, they turn Tuesdays into Sundays.

Ice cream people watching is an art in itself. As is, by the way, ice cream.
It must be eaten as life must be lived; messily and in stride.

The sun is now setting. I round a good day with an icecream cone for myself. I offer the dog a lick and a bite; he is happy to oblige.


the icecream people make me feel good,
inside and out.

This post, and others like it, can be read on the author's blog, Aristotle at Afternoon Tea.