The extensive protests that shook Iceland Tuesday have continued into Wednesday and are beginning to have an effect on one of the two political parties making up Iceland's coalition government.

Late Wednesday night, as thousands of protesters re-lit a large bonfire in front of the Parliament, the Reykjavik chapter of the Progressive Party voted to recommend to the party's national representatives that they withdraw from the ruling coalition, and called for new elections in May 2009. As the night wore on, though, matters descended into violence. Around 1:30 am, police dispersed the crowd with tear gas, the first time tear gas had been used against Icelanders in 60 years. The crowd soon reformed and pelted riot police with stones. One officer was severely injured by a cobblestone, the newspaper Morgunbladid said. 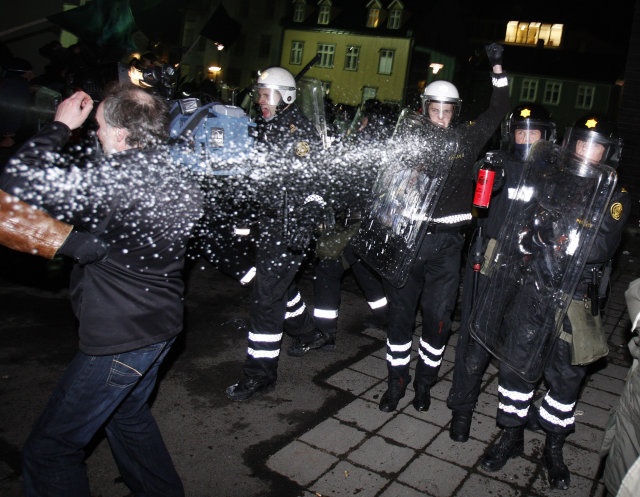 Although the leader of the Social Democratic Alliance, Foreign Minister Ingibjorg Solrun Gisladottir, was out of the country, Prime Minister Geir Haarde, leader of the Independence Party, told reporters that he believed she remained committed to the current ruling coalition. He insisted that the government was "functional" and that holding elections this spring would result in nationwide chaos.

The rank and file members of the Social Democratic Alliance appear to differ, however. Calls for the current representatives within the Party to step aside were widely applauded at tonight's meeting, as were calls for spring elections and a new coalition. 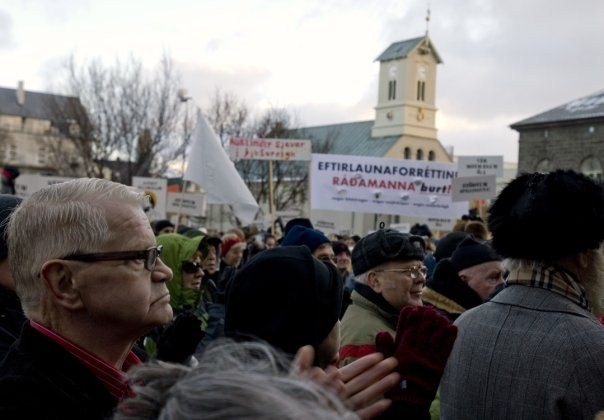 The protests have been sparked by Iceland's catastrophic economic collapse over the past three months, and the failure of the government to call for immediate elections or to investigate the rumored widespread malfeasance by the country's leading bankers, businessmen, and politicians. "It should be clear to everyone that a government that has failed as utterly as the Icelandic government has can neither investigate, nor clear up the past, nor forge a new path into the future," said retired professor Njörður P. Njarðvík.

Wednesday morning began with angry protesters throwing paint at the government building and surrounding Prime Minister Geir Haarde's car. They banged on the vehicle's windows and pelted it with eggs for several minutes before his bodyguards and police pushed them away. The protesters gathered in front of the Parliament building banged on pots and pans while shouting "Unfit government!" "You're fired!" and more creative insults. Although the racket calmed down to show respect to mourners at a funeral in the neighboring Reykjavik Cathedral, a mourner encouraged them to "produce enough racket to be heard across the country" when it was over.

Iceland has come to expect little change from the members of Althingi, the elected representatives, who have been widely criticized for being little but a rubberstamp for the conservative government agenda, but they claim they are getting the message. "So why aren't the protests getting through to you, why hasn't there been any change?" a state television reporter asked a Social Democratic Alliance representative. "We very clearly noticed the protests, and we get the message that people want change," he said without elaborating. The Conservative Party Representative's reply to the question painfully demonstrated whose interests the Icelandic Althingi represents: "Well, representatives are just representatives," Ms. Ragnheidur Rikhardsdottir, said, "and ministers are ministers, and theirs is the power."

The current political leaders are deeply invested in the status quo and are unlikely to come out of any open and honest investigation with any credibility, so it remains to be seen how far the party's rank and file can go before they meet resistance. The leaders' audacity in the face of the utter failure of their policies would indicate that their powers of introspection and rational thought are on the wane.

After the events of the past two days, however, I feel confident that we will soon be voting for change. The crowds are composed of a wide cross-section of the community, not just a few young hotheads. The protesters' numbers, in proportion to the country's population, are staggering--over 1% of the population. An equivalent meeting of Americans would be over 3 million people.

We are the ones we have been waiting for (where have I heard that before?) 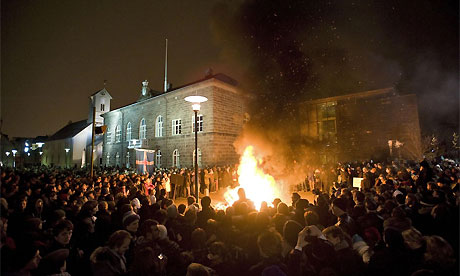