While Americans were watching the historic inauguration of Barack Obama as successor to the deeply unpopular conservative George W. Bush, thousands of Iceland's citizens were fighting riot police around the Icelandic parliament building Althingi to try to prevent the world's oldest parliament from meeting. 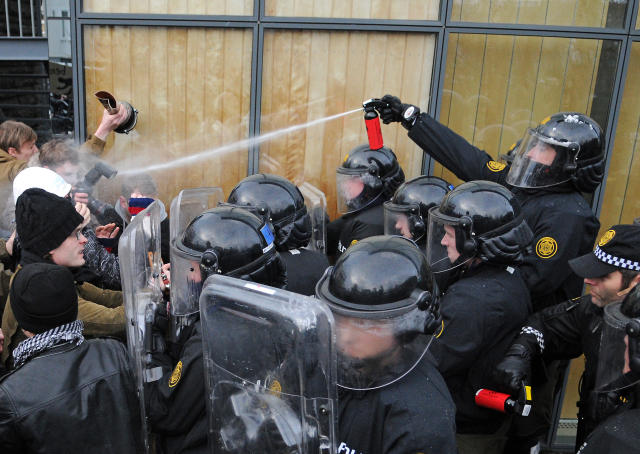 "We are calling on the world to help us get rid of this corrupt government," Sturla Jonsson, one of protesters said in a midnight phone call from downtown Reykjavik where a crowd of about 2,000 still surrounded the Althingi House, in front of which a bonfire continued to burn. The protesters pounded drums and other instruments, shouted slogans against the government and parliament and threw eggs and food items, even old shoes at the house of parliament. The protest was nowhere close to slowing down despite it being close to midnight. The parliament postponed meeting until tomorrow afternoon, but protesters, whom police fought all day with teargas, pepperspray, and clubs, vowed to stay downtown all night, "and as long as we have to" Jonsson said. "And I want to tell you that the people gathered here are not "activists" or "militants," he added, "they are just ordinary adults of all ages." 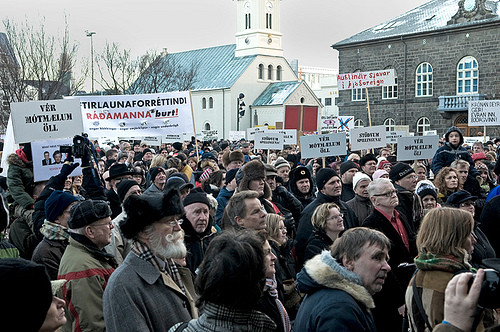 One year ago, Iceland was named the most desirable country in the world. Today, its economy has been devastated by the catastrophic collapse of its three largest banks. Unemployment rose 45% between November and December, and a recent survey indicated that 40% of households and 70% of businesses were technically bankrupt. Since the fall of the banks in October, there have been no resignations from the government, the boards of the now nationalized banks have remained substantially the same, and weekly gatherings calling for new elections have been ignored.

Americans will certainly recognize strong parallels between Iceland's current situation and their own. After years of tight state regulation, the conservative government of David Oddsson privatized Iceland's banks, and in exchange the newly-rich owners of these banks ensured that Oddson's party remained in power. Even after he stepped down, he had himself appointed as head of Iceland's Central Bank and continued to ensure that regulatory oversight was kept to a minimum.

The Icelandic government appears to be completely oblivious to Reykjavik burning around them, fiddling with vital legislative affairs, such as the item on today's parliamentary agenda, the Conservative party's bill to allow supermarkets to sell booze. Members of the government, who themselves have been busy burning - most recently the country's socialized medical system - remain convinced of the correctness of their current misguided course of action. "We need to keep this system of ours running. We need to try to improve it," Education Minister Thorgerdur Katrin Gunnarsdottir, (whose own personal finances are linked to a shady scheme cooked up in one of the Icelandic banks) said this evening. The incremental changes proposed by the government stand in stark contrast to the egregious abuses of the financial system for the benefit of a select few over the past few years.

Thomas Jefferson wrote in the American Declaration of Independence that "Governments are instituted among Men, deriving their just powers from the consent of the governed [and] whenever any Form of Government becomes destructive of these ends, it is the Right of the People to alter or to abolish it, and to institute new Government." As the protesters fight to enforce that right, in this county that has known no war for generations, that has not seen violent conflict among its citizens for centuries, we must ponder what could be.

Today, as the United States makes a fundamental shift in direction, Iceland is tearing itself apart. The peaceful transition of power we watched in Washington following a fiercely contested election is a symbol of hope to us. The competent confidence and inspiring rhetoric of Barack Obama have rallied the vast majority of Americans behind him to face the myriad challenges all around us. The arrogance and obliviousness of Iceland's ruling elite has had the opposite effect.

Over the past eight years, America ceased being the City on the Hill, shining its light to the rest of the world. America and Britain closed the NATO air base in Iceland, and have made no offer to help Iceland in its time of trouble. We need help, not only to break down the old power structure, rotten to the core, but also to prevent it from being rebuilt. We desperately need stability, economic assistance, impartial advice, and fair supervision.

Barack Obama, a nation turns its lonely eyes to you. Please! 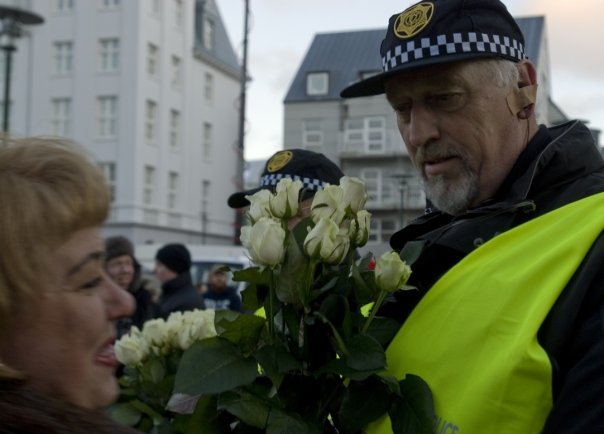 Protest organizers have emphasized that protesters be respectful of police; "they are only doing their jobs." Photo credit: Kjartan Einarsson 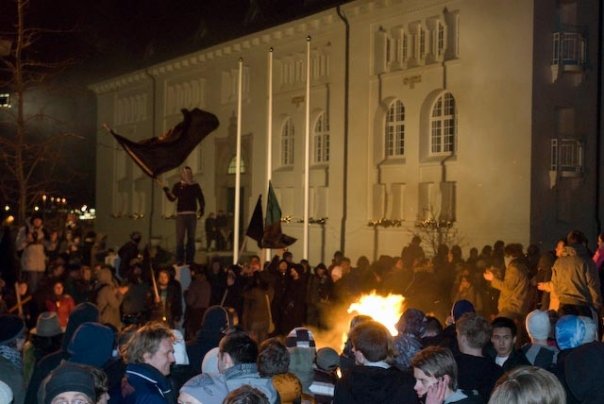 Photo credit: Kjartan EinarssonRead more on this subject:What's next for Iceland: Ensuring a Fair Election in MayIceland is Burning - Day 2"Crime Once Exposed has no Refuge but in Audacity"Iceland - the Nordic Zimbabwe