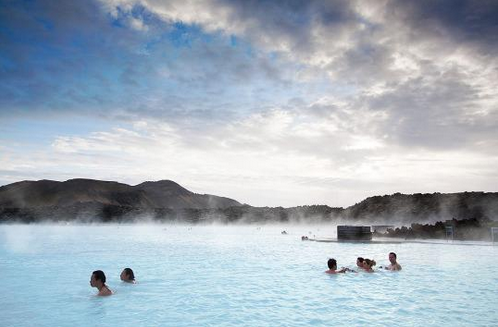 Here's a fun fact: My favorite word is "free." As in, I like to feel free (hence my penchant for muumuus); I love to be free (I am a crazy patriot -- seriously, there's nothing like traveling the world to make you really appreciate America); and... I luuuurve a freebie -- as in free stuff. I'm the geek that freaks when I go to the supermarket and they have food samples -- I will try them all, because you don't have to pay for it. I also have a large collection of (free) pens I may never use, random makeup (gratis at most makeup counters), and hotel soaps. What can I say -- it's a trigger word for me. So when Icelandair
announced it was giving free stopovers to anyone visiting Europe, I stood up and took notice.

I'd never been to Iceland -- for some reason, I always assumed it was far, far away. But I was off to film in Greenland and decided to fly via Iceland instead of Denmark, due to said free stopover. It was one of the best decisions I've made this year. To start with, it is only four hours away -- I live in New York, so Reykjavik is closer than Los Angeles. And with the dollar so strong right now, while Iceland isn't free, it's certainly not as expensive as it used to be.


But the best part? Iceland is a land where magic happens. As in magical people live there -- and I don't mean those Vikings roaming the streets of Reykjavik. (Although, for all you single ladies out there, yes, they are indeed magnificent.) If you don't believe me, just ask an Icelander. According to one study, up to 72 percent of people in Iceland believe in elves, trolls, and the huldufolk, or "hidden people" -- who apparently look just like us but live in a different dimension inside rocks, which open up (for them, not us) like a Harry Potter tent. I'm not making this up. This is really what people will tell you in Iceland.

After spending just one weekend there, it's not too hard to understand why people believe in elves and magic. Physically, it's a crazy (in the best way possible) little island, with landscapes that just don't make sense to the untrained eye. There are actual lava fields (the older ones, covered in moss, the "younger" ones -- only a few thousand years old -- still black), glaciers, soaring cliffs, black sand beaches, waterfalls, hot springs the color of frost, and mountains that rise out of flat, verdant fields. It's a landscape that has inspired thousands of legends and brings to mind every fairytale you ever read as a child.

The entire island is an anomaly, and everything has a story behind it ... usually involving elves. It is a place where your imagination can run free. It's not a big island -- you can drive around the whole place in a couple of days -- but you can pack a month's worth of living into a weekend if you do it right. So I now present what to see and do during the perfect stopover in Iceland. Everything is within 77 km -- or two hours' drive -- of the capital Reykjavik, which in and of itself is a destination and should not be missed. 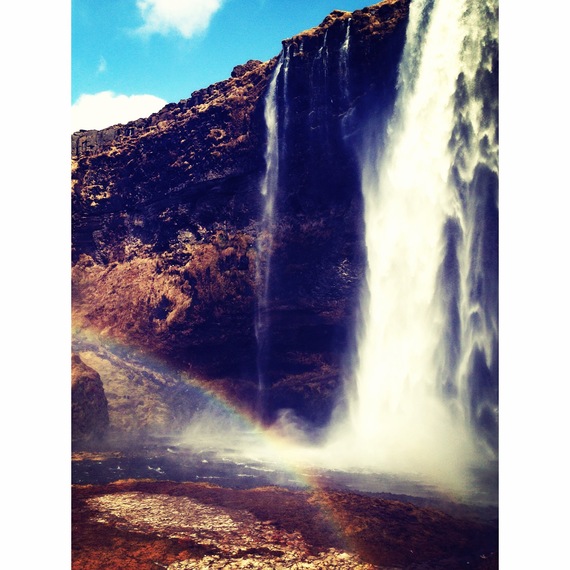 Located next to the Gljufrabui falls in Hamragardar, which is hidden behind rock walls, Seljalandsfoss is unusual in that it can be viewed from 360 degrees -- as in you can walk all the way around it. It's a massive, 130-foot-high waterfall, and in the fields surrounding it are ancient Viking homes that date back more than 1,000 years. The scenery is like a cross between The NeverEnding Story, The Dark Crystal, and Labyrinth, three of my favorite movies. 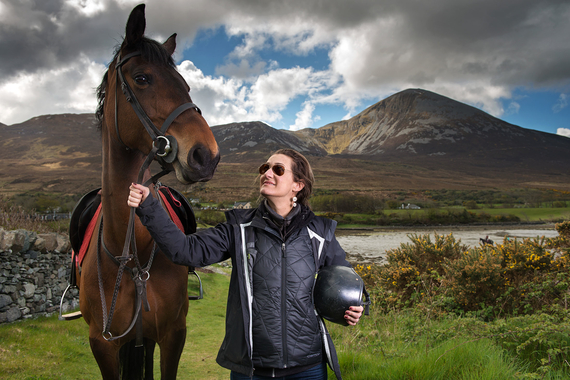 The A Broad Abroad team at Skálakot.

The Icelandic horse is a hardy little animal -- and looks like a cross between a Shetland pony, a Clydesdale, and a 'roided out bodybuilder. Developed from ponies brought in by Norse settlers in the ninth and tenth centuries, these guys can trek over anything ... and have the best hair I've ever seen on an animal: long, frizzy, poofy, and thick, it reminds me of my own head of hair. (Any animal that suffers through bad hair days as much as I do has my heart.) Hop on and trot through lava fields, up mountains, and across the fields, all the while yelling "charge!" in your head. (It's all very Game of Thrones -- trust.)

Just outside of Vik, Iceland's southernmost town, is Reynisfjara black beach. You can't swim -- the water is close to freezing, the rip currents are herculean, and there are deadly rogue waves -- but the scenery is legendary. Upon entering the beach, you'll see an intricately carved cavern -- which is related (at least in tale) to the huge Reynisdrangar basalt sea stacks just off the coast. According to locals, the cavern, which has a rocklike mass on top that looks like a chimney, was home to husband and wife trolls. One night, they were looking out to sea during a huge storm and saw a ship struggling, about to crash on the shore. So they went to help the ship and tried to push it back into the sea, but there was a really strong storm. They worked for hours and hours and lost track of time, and then the sun came up. And as the first rays of sun hit them, they and the ship they were touching turned to stone.

For the full experience watch the whole video - it's awesome...