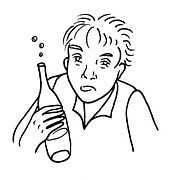 Iceland may be the world's most progressive country at reducing teenage substance abuse. In the more than 4 decades that I have studied, researched and written about substance misuse, I have not seen a more promising approach.

For three decades, I have been a regular consultant to this spectacularly beautiful and sparsely populated Nordic country (population = 332,000). In the late '90s, it was commonplace on Friday and Saturday nights to observe hordes of drunk teenagers sullying the streets of Reykjavik in mob-like revelry. Today, nearly 20 years later, I am witness to Iceland's unprecedented success in preventing substance misuse and other harmful behaviors among arguably the most volatile demographic on earth -- teenagers. 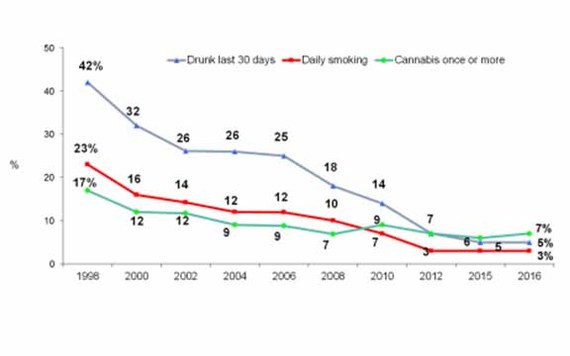 Better than Dope
Promoting alternative recreational activities, strengthening family ties, improving self-efficacy (a person's experience of competence and self-regard), building social competence (comfortably and responsibly relating to others), and broadening cultural experiences are the most effective strategies for delinquency and drug abuse prevention. At-risk youth can turn their lives around when exposed to and engaged in fulfilling alternatives to drugs and crime [2, 3, 4].

Iceland has succeeded at implementing these ideals on a national scale...other countries should urgently consider taking a page from their book!

Across the U.S., there are thousands of "evidence-based" prevention programs designed to interrupt the dangerous trajectory from teenage drug abuse to a panoply of persistent problems across the lifespan. Yet substance abuse among youth in the U.S. remains rampant. According to the most recent data from the U.S. Monitoring the Future Survey (2016), the percentage of 10th, 11th and 12th grade students that participated in binge drinking (5 or more in a row) in the previous 2 weeks was 4.6%, 10.9% and 17.2%, respectively. Daily cigarette smoking in the same grade levels was 1.3%, 3.0%, and 5.5%. Annual use of marijuana/hashish was 11.8%, 25.4% and 34.9% [5].

The Obama administration is trying to weigh-in. For the first time, his administration proposes more funding in FY 2017, for demand reduction efforts than would be focused on supply reduction [7, 8]. Although the federal government now intends to budget $1.5 billion dollars for prevention, throwing more money at teenage drug abuse cannot solve the magnitude of the problem. 4,358 people in the U.S. under age 21 die each year from alcohol-related car crashes, homicides, suicides, alcohol poisoning, and other injuries such as falls, burns, and drowning [9]. Especially in the categories of binge drinking and annual marijuana use (the most widely abused drugs in adolescent culture), we are woefully behind Iceland's gold standard for success.

Where are we missing the mark?The problems with developing a successful approach to prevention in the U.S. are 4-fold:

1) Federal, State and local governments prioritize law enforcement and treatment over prevention. Most of the funding is allocated to crisis-oriented law enforcement, treatment or punishment for attempted suicide, overdose, burglary, robbery, and assault.

Why Iceland is differentIceland, despite their cataclysmic banking crisis of 2008, has shown sustained and progressive improvement in preventing teenage substance misuse over the past 20 years. In fact, the Youth in Iceland model which is now is being replicated in 14 countries and 32 different municipalities throughout Europe is about to celebrate its 10th anniversary --Youth in Europe.

The tide began to turn in 1997 when substance abuse among Icelandic youth was approaching epidemic proportions; for example, 17% of 15 year olds had already tried hashish and wanton binge drinking was becoming the norm. Despite a concerted approach to provide school-based education about the negative effects of drugs, alcohol and drug abuse appeared to be spiraling out of control.

A visionary group of policy makers, researchers and practitioners - decided to gather their strengths, try out a new approach, and see whether it might be possible to reverse this negative, upward trend in substance use among young people.

We wanted to change what looked like this: research, policy and practice {as} three separate aspects with scientists publishing their findings, not knowing, and often not caring much whether they would come to any use in society.

We wanted to change from this: 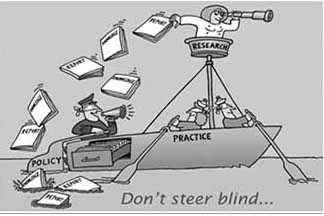 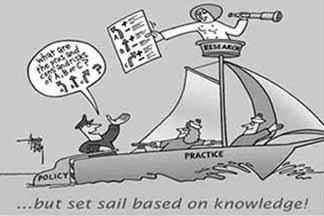 This interdisciplinary group initiated an intersectoral collaboration (i.e., uniting multiple sectors of society) ** among a broad network of stakeholders in adolescent well-being, i.e., parent groups, schools, research scientists, politicians, media, sports organizations, and corporations. A highly-publicized annual "Prevention Day" was launched in 2007 by the President of Iceland, the goals of which were to:•Increase time spent together by adolescents and their families•Postpone the onset of alcohol use until 18 years of age and over•Increase adolescent participation in structured and organized youth activities supervised by adults

The Icelandic ModelThe Icelandic model is predicated upon three pillars of success: 1) Evidence-based practice; 2) Using a community-based approach; and 3) Creating a dialogue among research, policy and practice.

The high value placed on political support for evidence-based drug prevention is epitomized by the policies of Dagur Eggertsson, Mayor of Reykjavik:

My vision is that politics should be in a much closer dialogue and discussion with academia and researchers, and that good monitoring of policies are instrumental to having good results.

Analysis of these surveys shows that affiliations with family, peer group effects and types of recreational activities available are the strongest predictors of the paths taken by adolescents. -Inga Dóra Sigfúsdóttir

Jón Sigfússon (ICSRA Director of Youth in Iceland and Youth in Europe) explains the essence of the Icelandic model:

Well it's not magic. It's simply organized, structured work. We collect data in Iceland in February among the 10-16 year olds and within a period of about two months we have processed this data and made the report. They know from this data the situation in their municipalities approximately two months after the actual data collection.

Today we have contact persons within all these municipalities and we regularly communicate with them. We tell them what's up next in the research field and in the data collection. When they get their reports, or even before that, they have set up meetings and someone from our research institution comes and we go through the data...with them.

They gather people working in the field... teachers, politicians, people from the health care center, the church, the sports club. They gather parents of course. We go through the situation and just talk about how the situation is. This is how your children are feeling, this is what they want and here there is a rise, here is a decline. We follow this up so that the information gets into action as soon as possible.

Where do we go from here? In her closing remarks at the UN Special Session Professor Sigfúsdóttir presented her view on how to move forward:

In a world where there are practically no cultural or national boundaries anymore - AND cyberspace is without limits - teenagers are mobile in more than one sense of the word.

In this kind of world, we know that it is only through joining forces, by learning from each other and basing our work on trustworthy research, by which we will succeed in fighting substance use. It is not an easy task. But - based on research - we know it can be done - with guardianship, community attachment and informal social control. We will not change anything by single project solutions. Prevention needs to be consistent and comprehensive - not one campaign, but a quiet revolution!

If you want to replicate what happened in Iceland, here is what I recommend you to do:•Minimize unsupervised adolescent time periods•Create more activity, frequently and in structured ways•Delay 'first drink' onset•Base your efforts at a community level - where things can get done, practically and quickly•Get your Presidents and elected leadership to campaign for this venture

**Intersectoral action refers to actions affecting health outcomes undertaken by sectors outside the health sector, possibly, but not necessarily, in collaboration with the health sector - World Health Organization: http://www.who.int/kobe_centre/interventions/intersectorial_action/en/