Any doubts as to whether Iceland's elite has declared war on its people were dispelled this weekend.

First, on Friday Björgólfur Guðmundsson filed for bankruptcy. Guðmundsson made several hundred million dollars in St. Petersburg in an astonishingly short time after being convicted of fraud in Iceland. He returned to Iceland with his son to amass billion dollar fortunes after some insider deals, creative bookkeeping, and the alleged assistance of the Russian mafia. Guðmundsson was a major owner of Landsbanki and a major debtor to Kaupthing Bank, two of Iceland's failed banks. Strangely, his son's fortune does not appear to have been affected by the economic downturn; the suspicion is that all of the family's debts were transferred to the father, and all of the assets to the son.

Next, on Saturday Eva Joly, the French-Norwegian magistrate appointed earlier this year to investigate fraud in connection with Iceland's "economic miracle," published an essay in several major European newspapers harshly criticizing the European governments--Great Britain and the Netherlands in particular--for insisting that the Icelandic people pay in full for the fraud perpetrated by the country's financial, business, and political elite. She noted that the unfairly proposed IceSave agreement, under which the British and Dutch depositors in Landsbanki's internet savings accounts would receive full compensation from the Icelandic government, would lead to an outflow of talent from Iceland, creating a downward spiral that makes it even more unlikely that the nation will ever recover.

Then, secret documents detailing massive loans to Kaupthing Bank's biggest shareholders were leaked to WikiLeaks. Although it was widely understood that the powers-that-be received large loans, the size of the loans was astounding. Plus, there is something visceral in pairing up the names and the loans. It is for the sake of these unscrupulous characters that the next generation faces massive deprivation?!? 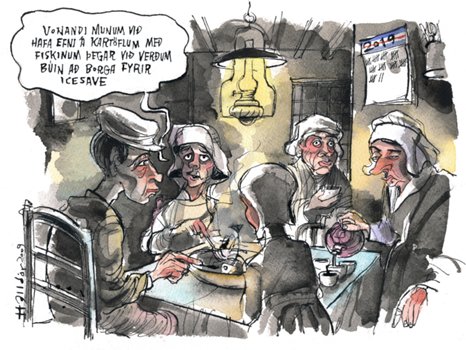 Icelandic cartoonist Halldór Baldursson's take on Van Gogh's The Potato Eaters: The Fish Eaters: "Hopefully we'll be able to afford potatoes with the fish when we're done paying for IceSave."

The attorneys for New Kaupthing Bank (now owned by the Icelandic government) first threatened WikiLeaks with legal action, then successfully obtained from the Reykjavík Magistrate, who is a relative and good friend of Kaupthing insiders, an injunction barring the Icelandic National Broadcasting Service News from revealing the details of these widely-available documents. Astonishingly, the INBS News complied with this obviously illegal and ineffective order.

These developments are, of course, just the latest in a long series of events in which a small group of individuals have treated the Icelandic people as fools and suckers. The financiers and businessmen bought the media, the politicians, and everything else of real value. The professional political class presented the voters with no real choices. Laws were enacted, agreements were reached, all to the ultimate benefit of a few.

Enough tidbits were doled out to the masses to keep them in line, but no real power ever left the hands of the leading criminals/leaders. Our recent colonial past (Iceland was a colony of Denmark until 1944) has perhaps left us more passive as a people than any other European nation. We have no tradition whatsoever of rebellion or revolution.

"Few nations are believed to have tolerated oppression and brutality with more affability than Icelanders. For ages, up to this day, they existed in tolerant passivity with their oppression, without ever making an attempt to revolt. To no other nation was the revolutionary concept so foreign. Icelanders were always willing and content to kiss the rod that roughest beat and believe that the most brutal executioner was their sincerest support and safest refuge."

The so-called "Pot and Pan" revolution this January was the only instance in modern history of Icelanders standing up to their rulers. Unfortunately, although the ruling coalition resigned and new elections were held, no fundamental changes have been instituted. Essentially, the same individuals and political parties that for decades have ruled the country have remained in power, the same businessmen run the bankrupt companies, the same financial wizards run the nationalized banks, all guided by the twin philosophies of cronyism and nepotism.

Thomas Jefferson wrote in the American Declaration of Independence that "when a long train of abuses and usurpations, pursuing invariably the same Object evinces a design to reduce [the People] under absolute Despotism, it is their right, it is their duty, to throw off such Government, and to provide new Guards for their future security."

The government has lost its legitimacy due to its inability to protect the Icelandic people from long-term penury and its unwillingness to swiftly bring the criminals responsible for this travesty to justice. Only by completely purging the system can we restart. The stolen assets must be returned now, the responsible parties must be held personally responsible now. If the government isn't willing to deliver that justice, it's time to instate a government that is.

I cannot conceive of why the countries defrauded by Icelandic businessmen would help us, as long as these traitors remain at large. Until we clean our own house, our complaints about the unfairness of being held liable for the transgressions of a few will fall on deaf ears. Until we stand up for ourselves as a people, we are in no position to beg forgiveness and assistance.

For the first time in our history, we must stand up against our oppressors and reclaim our independence.