Sublime. Celestial. Surreal. Since this is the kind of language used to describe the northern lights, I wanted to keep some sense of wonder intact while hunting the heavens for it in Iceland. At the same time, I knew that a bit of planning and research would be needed in order to maximize my chances of seeing that rare green glow.

Iceland is one of the world's most accessible spots for viewing the northern lights, making it one of the country's top tourist attractions. Capitalizing on its mystique, enterprising Icelanders have designed borealis-oriented cruises, overland tours, and even a concept bar at far-flung Ion Hotel. So what is the best way to go about seeing the phenomenon?

Here are a few things I learned while reading up on the northern lights in Iceland, seeking it out on my own, booking a tour to see it, and finally catching a glimpse.

For ages, humans stared up at the northern lights with little more than myth and superstition to explain it to themselves. Icelandic folklore has it that if a pregnant woman gazes at the northern lights, her child will be born cross-eyed. Ancient Nords and native Inuits both took the lights as a frightful omen. Now we know that the phenomenon isn't a precursor to calamity and that there's no need to shield your eyes or hide your kids.

Aurora borealis, as it known scientifically, occurs when solar wind (gusts of charged particles that the sun releases) collides with the magnetic forces of the earth's atmosphere. Its southern counterpart is aurora australis. Both occur at extreme latitudes close to the earth's magnetic poles. 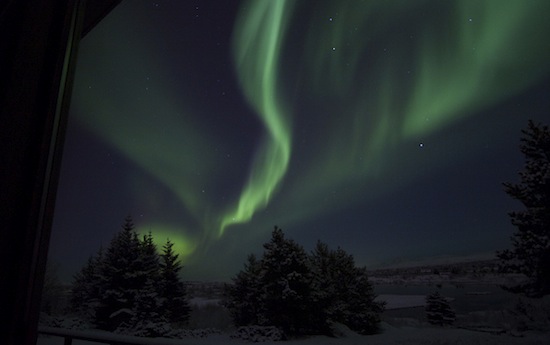 Solar wind essentially illuminates wavy magnetic fields in the sky, which is where the rippling ribbon shape comes from. The most common color of light is green, but other colors can occur depending on the kind of particle and the altitude of the collision. The higher up, the more rare the color. Blood-red auroras happen at heights of up to 200 miles from the earth.

Winter is the best time for viewing the northern lights, since darkness is a must. August through mid-April of 2012-2013 has been an especially good season for viewing. This is because we're coming close to an 11-year peak in sunspot activity, which means lots of solar wind. It's not too late -- the peak isn't over. Another two or three fantastic winters are anticipated.

Aurora-gazers have the best chances around the spring and fall equinox, so anytime around September 22, 2013 and March 20, 2014 are looking good, or anytime in between.

Chase them on your own, or book a tour

I spent four nights in Iceland; four chances to see the northern lights. The first night, I booked a stay in the small town of Hveragerdi, about a 45-minute drive from the light pollution of Reykjavik. When conditions align, the outdoor thermal hot tubs of Frost and Fire Guesthouse are an ideal viewing spot. Alas, my one night there was full-mooned and overcast. No green dazzle.

One night down, three nights left. Noticing northern lights tours advertised in all the tour offices in Reykjavik, I was skeptical. Can something as elusive and capricious as the northern lights really be canned and commoditized? 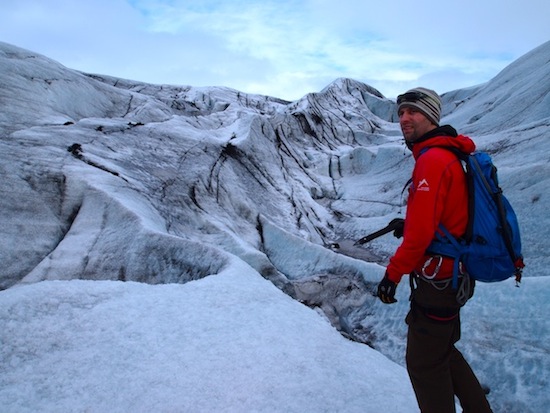 Hedging my bet on the celestial spectacle with an outdoor adventure beforehand, I opted for a tour that combined both glacier walking and northern lights viewing. The day was well-planned: spend a few hours romping around in crampons on Sólheimajökull glacier, then pass the time waiting for darkness to fall with an Icelandic dinner and visit to the volcano museum. The last stop before the lights chase began was Seljalandsfoss waterfall, imposing and floodlit in the dusk. Even if the tour had ended there, it would have been worthwhile.

Forecasted, but not guaranteed

Night was falling. Just before the aurora hunt began, our guide Stefan searched the most updated forecasts online. To forecast the northern lights, he explained, five criteria are taken into account:
1) It has to be nighttime
2) The sky has to be clear or at least partly clear of clouds
3) There has to be an eruption on the sun that releases solar wind
4) The solar wind has to be directed toward the Earth
5) The particles from the eruption must reach the Earth's magnetic field

That night, we had four out of five criteria on our side. Working against us: cloud coverage. We piled out of the bus for our first viewing attempt, bracing ourselves against the cold wind outside. I stared at the clouds forcefully, trying to will them apart with my gaze. Nothing. Back in the van, back out again for another attempt, strike two. A sense of defeat was sinking in.

In Iceland, images of the northern lights had greeted me at every turn. On an airport billboard glowed dreamy swirls of luminous green against a black licorice sky. Maps and city guides, websites and brochures -- anything printed in English, it seemed -- was set against a background of wavy neon light in the sky. The marketing material had me thinking that all I'd have to do was look up, camera in hand, point, and shoot. 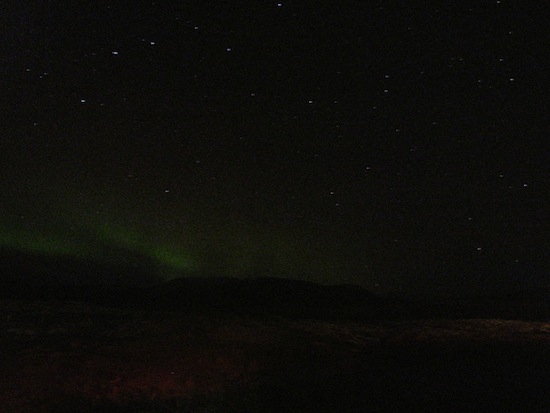 At dinner before the lights hunt began, our guide Stefan offered some photography help. To really capture the effect, he said, you'll need a camera with manual settings, and probably a tripod. Experience with long-exposure shooting is a plus. I had already decided that photos were out of the question. if I was going to see the northern lights, it was going to be through my corneas, not on a camera screen.

After two failed viewing attempts, the tour bus bounded back toward Reykjavik. I was dozing off in disappointment when the bus suddenly veered to the side of the road and lurched to a halt. A hole in the clouds! We spilled out of the bus and stared at that small patch of sky, imploring. Slowly, faint streaks of green made an apparition. We cheered them on, and another wave appeared above them, less shy this time. Three seconds, and the show was over. A curtain of clouds closed in. More applause.

Of the 12 passengers on the tour, only one had set up a camera with a tripod. We huddled around to see how his image had turned out. It wouldn't make the cut for a travel brochure, but it was proof -- we had seen the northern lights, briefly.