A powerful volcanic eruption in Iceland made the headlines throughout American and Europe today. Air travel across the north Atlantic has come to a halt, and domestic flights in Europe will be curtailed for at least a day or two.

The volcanic activity began with an eruption near the Eyjafjallajökull glacier about three weeks ago. This eruption appeared "safe," and it quickly became a prime tourist attraction. The developing caldera is easily accessible from Reykjavik and, for the right price, guided tours were available by bus, all-terrain vehicle, snowmobile, and helicopter. At any given time, there were hundreds of spectators in the surrounding hills and overhead. People were getting so close that they were getting pelted with rock and ash. A new fissure opened a couple weeks ago about 100 meters from a group of tourists. Some enterprising chefs set up a restaurant of sorts near the volcano, and sold lava-grilled lobster and the like for premium prices. As Ómar Ragnarsson, an Icelandic environmentalist, news producer, and comedian, observed, it was a perfect "tourist eruption." 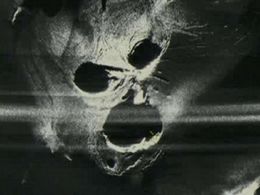 The face of evil? This macabre photograph taken yesterday from aboard an Icelandic Coast Guard helicopter shows the three fissures on top of the glacier.

When the volcanic activity appeared to cease a few days ago, the circus began packing up, and the nation's attention turned to the release of the so-called Black Report on the Icelandic financial collapse in October 2008. The legislature's investigative report had been delayed repeatedly, and the public's expections were not terribly high.

Fortunately, it exceeded nearly everyone's expections. It thoroughly explained how we got ourselves into our current mess, and pointed the finger on the main transgressors. The special prosecutor followed up by indicating that he was preparing to issue criminal indictments as soon as this month.

However, even these tidings had to take a backseat when a new volcano erupted yesterday. The new eruption is about ten times more powerful than the "tourist eruption," and is located under a glacier. The glacier melted, causing glacier runs (jökulhlaup) that have twice flooded the south of Iceland. A vast cloud of ash rose 30,000 feet into the air, endangering aircraft motors over the north Atlantic.

Perhaps it is part of our national character to ignore potential dangers until it's too late. Volcanos created Iceland, and have, at times, done their best to destroy its human interlopers. 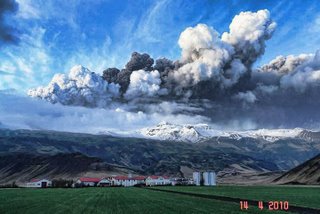 This photograph, which has been making rounds in Icelandic cyberspacem, was taken by Ólafur Eggertsson, from the farm Þorvaldseyri.

The 934 AD lava flow from the Eldgjá fissure system unleashed the largest flood of basalt on the planet in historic times. The Laki eruption in 1783 had the largest outflow of lava since then. It emitted fluoride that poisoned half of Iceland's livestock, resulting in a famine that killed approximately a quarter of Iceland's population, and thrust vast quantities of sulfur dioxide into the atmosphere, directly causing many deaths in Western Europe, and contributing to several years of extreme weather in Europe. It is often credited as an indirect cause of the French Revolution.

Katla, which is part of the same volcanic system as Eldgjá and the current eruptions, lies under the Mýrdalsjökull glacier. It has violently erupted on many occasions, causing sudden floods of unthinkable violence (that water flow during the two-day jökulhlaup associated with the most recent subglacial eruption at Katla was 200,000 cubic meters of water per second; the Amazon's flow is 10,000 cubic meters per second) that have wiped out roads and farms, taking people with them, and leaving the survivors on mountaintops that became islands for days at a time. After the 1311 eruption, a farmer and his son allegedly survived by clinging to an iceberg that later drifted back to shore. Although it has historically erupted every 40-80 years, its last major eruption was in 1918, so it is considered overdue, and there is speculation that the current activity is a precursor of a new Katla explosion. Each of the previous three Eyjafjallajökull eruptions since Iceland's settlement (920, 1612, and 1821-23) has been followed by a major Katla eruption.

Maybe Katla will explode, and maybe it won't. Maybe the new volcano will continue to grow, like Parícutin, until it towers over the landscape, but maybe it will just fizzle out over the next few months. There are simply some events over which we have no control.

By all accounts, the Icelandic public safety officials have taken all the steps they can to ensure that observers don't endanger themselves or others. Although some farms and roads have been washed away, there have been no human or animal fatalities because of the volcanoes.

Nevertheless, this may be a black swan--a rare, but extremely significant, event. We need to feel that we understand and control our environment. We have spent enormous sums of money, and employed state-of-the-art technology to study the tectonic plates, to locate and measure the magma chamber, and to plot every tiny movement of the crust. Icelanders are justifiably proud of the fact that most of our houses are warmed with geothermal energy. We believe that we have tamed the Earth's heat and made it our servant.

Unfortunately, of course, we can no more completely tame the Earth's molten core than we can completely tame a killer whale. We have the comforting illusion of control, but the uncontrolable beast beneath will ultimately emerge and destroy its putative master. As J.R.R. Tolkien noted, "It does not do to leave a live dragon out of your calculations, if you live near him."

Much energy (and money) has rightfully been expended studying the effects of greenhouse gases on the global climate, and more will be spent to deal with the consequent problems we will face, even though this phenomenon is unprecedented.

It is a fact, however, that volcanic ejecta has radically changed our environment in the past. The Laki and Asama eruptions of 1783 were followed by an unusually cold year. The Tambora eruption in 1815 was followed in 1816 by a "year without a summer." A marked decrease in solar radiation in 1884-85 followed the Krakatoa eruption. Today's flight delays are just a whiff of the possible disruption Katla could cause. The costs of a major eruption today would be catastrophic.

We like our cataclysms to be gradual -- like global warming, or distant -- like the Haiti earthquake or the south Asian tsumani. If they're gradual, we commission studies, present papers, assemble conferences, sign treaties, award Nobel prizes, and kick the can down the road to the next generation. If they're distant, we hold fundraisers, sing songs, hold prayer services, participate in photo ops, and do just enough to feel good about ourselves before allowing the affected area slowly slip from our consciousness into oblivion.

A sudden global disaster--such as an asteroid strike, the eruption of the Yellowstone volcano, or a nuclear war--could destroy our civilization. We've become more and more dependent on a house of cards, and a disruption of that magnitude would collapse our institutions.

Our man-made crises fill our everyday lives, but we ignore natural phenomena at our peril. We lose sight of how detached from our environment we've become, how thin the veneer of civilization really is, and how fragile our bodies and our institutions really are.