At long last, Iceland's parliament--the Alþingi--has passed a bill settling Iceland's dispute with the United Kingdom and Holland regarding the government's responsibility for losses suffered by British and Dutch depositors when one of Iceland's three major banks--Landsbanki--went into receivership in October 2008. Unfortunately, Iceland's President, Ólafur Ragnar Grímsson, has not yet signed the bill and has indicated that he may instead call for a national referendum. If a recent poll is accurate, the agreement would be rejected by a large majority of Icelanders.

Tens of thousands of investors--individuals, municipalities, and charities--took advantage of the exceptionally high rates offered on Landbanki's IceSave savings accounts, only to discover that these accounts were not formally backed by any government. Landsbanki officials had inexplicably failed to register as a domestic bank in either country, and thus were not backed by government deposit insurance. When Landsbanki went into receivership on October 7th, British authorities invoked anti-terror legislation on October 8th to freeze Landsbanki's assets there.

When Davíð Oddsson, the head of Iceland's Central Bank, and Icelandic finance minister Árni Mathiesen indicated--Davíð on TV: "We will not pay the foreign debts of irresponsible mess makers; we'd be saddling our children with such debt, it would be slavery..."- that Iceland would guarantee losses suffered by Icelandic depositors, but not foreign depositors, Gordon Brown noted that Iceland was in violation of the European Economic Area's (EEA) anti-discrimination laws and insisted that the Icelandic government reimburse all depositors. Although the International Monetary Fund (IMF) agreed to assist Iceland, it has refused to release additional funds until the IceSave matter is resolved.

The first attempt to resolve this matter resulted in a blatantly unfair agreement, which Iceland rejected. After further negotiations, a more palatable accord was hammered out and approved by a narrow majority in the Alþingi on December 30, 2009. Fitch lessened its downgrade on Iceland in anticipation of the bill's passage, and Iceland received the first tranche of a loan from the Nordic countries. 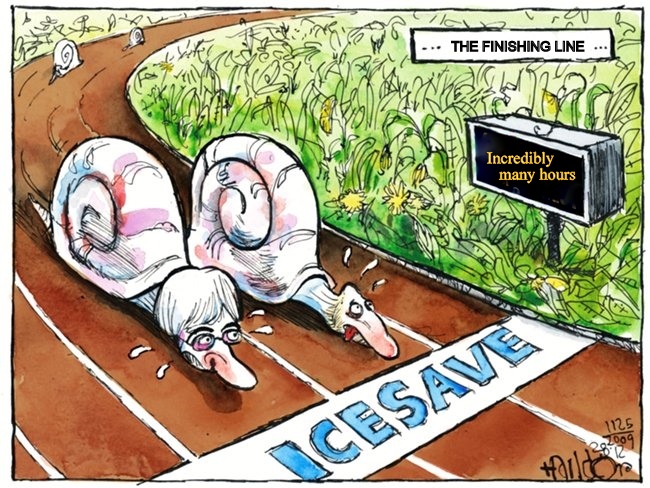 The group InDefence has presented Ólafur Ragnar a petition purportedly containing over 60,000 signatures calling for him to veto the bill, and over 500 people are currently camped out in front of his official residence, Bessastaðir.

It would indeed feel satisfying to tell the Brits to cram it. The invocation of anti-terror legislation against a NATO ally in a matter that obviously did not involve any physical danger to the British public was insulting and irresponsible. The bullying tactics employed against a much smaller country that was in obvious distress demonstrated a complete lack of tact or compassion.

Nevertheless, Ólafur Ragnar should sign the bill because it's the right thing to do, and because the consequences of rejection would be disastrous.

As for the consequences, it's clear that the ratings agencies would place Iceland below investment grade, which would greatly increase the rate at which the country would be able to borrow. It's possible (if not likely) that the IMF would refuse to release any further funds.

The current government would almost certainly fall, and any chance at reasonable reform would die. The conservative Independence Party that ran Iceland until the collapse would retake power and restart the party. The businessmen whose reckless actions placed the county in danger would return with the illicit funds they've placed in off-shore accounts and buy Iceland's resources for a song.

Most importantly, the new government would take whatever steps necessary to ensure that these culprits never see the inside of a jail cell. The investigation of the misdeeds that led to Iceland's collapse has proceeded very methodically, and the special prosecutor now appears on the cusp of indicting some of the Independence Party's biggest supporters. If the investigators are allowed to continue, we'll see whether the rumors of money laundering for the Russian mafia are true, whether vast amounts of money are indeed sitting in Tortola, whether bank employees exploited pension funds with same glee that Enron employees exhibited while ripping off California consumers, and whether our politicians and regulators were bribable.

Until these questions are answered and the culprits are punished, we will never have a functional democracy in Iceland. The current government has been given the unenviable task of placing the country's finances on a reasonable and sustainable basis after years of irresponsible overspending by the Independence Party, and much of the belt-tightening has adversely affected individuals who had nothing to do with the banks' pyramid schemes. All of the Icelandic people are rightfully upset by Gordon Brown's handling of the matter, and are galled at the prospect of sending needed funds to him. We're also impatient with the pace of the special prosecutor's investigation--how can the United States place Bernie Madoff behind bars within weeks of discovering his fraud, while we're still waiting for the first indictment of any of the bankers?

So, we're damned if we sign the IceSave agreement, and damned if we don't. We need every krona we can get to rebuild our damaged economy, and it hurts to see these funds shipped off-shore. By not signing the agreement, though, we would ensure that our history is rewritten by the very persons who have placed our country at peril and who are just waiting for the chance to plunder it again. We would also be flipping a very large middle finger to the international community at a time when we need its assistance the most.

By signing it, Ólafur Ragnar would ensure that the new government would be able to finish what it has started--a thorough investigation into the events that led to our fall. Unless Eva Joly and Ólafur Þór Hauksson are permitted to complete their task, not only will the wrongdoers escape justice, but we will show them that there are no adverse consequences for their incompetence and malfeasance.