Earlier today I wrote a post about all the "Ich Bin Ein" headlines that were springing up around Barack Obama's visit to Berlin, in a callback to the famous speech wherein John F. Kennedy declared "Ich Bin Ein Berliner" which was translated as "I am a Berliner." (You can read it here and watch him do it here.) JFK delivered that speech in June 1963, and the full context of the quote was as follows: "Today, in the world of freedom, the proudest boast is 'Ich bin ein Berliner.'"

Following the speech, there was some confusion about whether he got it right — should he have instead said "Ich bin Berliner" ("I am a citizen of Berlin"), and did "Ich bin ein Berliner" actually mean "I am a jelly doughnut?" (A "Berliner" is a name for a type of jelly doughnut in Berlin.) Many people reported it as a gaffe — including the New York Times and no less an expert than Kennedy speechwriter Ted Sorenson, who wrote the speech in question and who reported in his recent memoirs, abashed, that he had gotten in wrong.

But he didn't! According to actual Germans, Kennedy was totally right. Here's what German professor Michael Jennings told the NYT's Steve Coates:

Certainly the most common and accepted way to say "I'm a resident of Berlin" is "Ich bin Berliner," i.e. without the indefinite article. But, for many speakers, it is by no means incorrect or ungrammatical to say "Ich bin ein Berliner." Some of my respondents in fact applauded Kennedy on his nuanced use of German, since for them the sentence without the indefinite article implies that the speaker is a native Berliner, while the sentence with "ein" suggests either more recent residence in Berlin or even solidarity with its inhabitants (which was clearly Kennedy / Sorenson's intention).

I actually linked to that effect in my original piece, but a commenter was still peeved that I had perpetuated the jelly donut myth (though let's leave aside for a moment whether you can rely on your audience to bring their own foreknowledge to the table). So, now that Obama has made his speech and in order to avoid any further confusion, I wanted to make things absolutely clear: 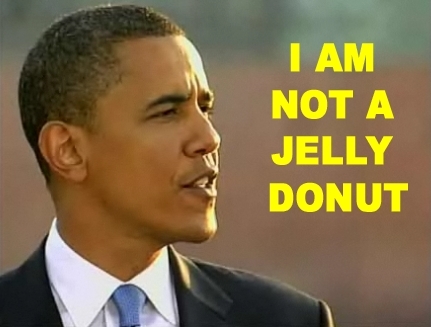 I hope that clears things up.

Related:
The Berliner: In Search of the Mythic Donut [Gridskipper]