This companion piece to my piece on how New York Musical Festival (NYMF) shows are selected will deal more specifically with the shows I saw during the 2016 festival. Each year, after I speak with people, I always wish I had seen other shows. However, because the runs are so short, choices are usually made before the buzz.

One thing I can say about NYMF and the Fringe and any other festival in which you need to put on a "full" production in a short period of time: ambition is your enemy. Icon is a show where, for the plot to make sense, the audience had to follow that there were two separate political revolutions. It's very likely that even if the show was better, NYMF would have not been the right place for it. As it was, not only was it at NYMF but Sebastian Michael's book was filled with vacuous characters and featured a monologue in which the legendary Donna McKechnie was forced to say her eyes were swollen shut and then five seconds later discuss the beautiful things she saw. 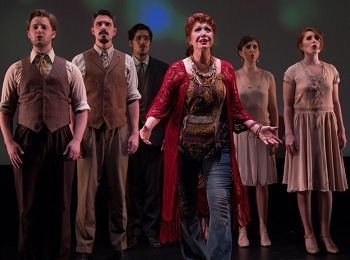 When things like that happen, I'm completely taken out of a show. It is what I like to call a "Wait..." moment. (These moments are contained even in Pulitzer winners, so it might simply be me.)

Single was one of the more promising shows I saw. I was nervous because before it got to the stage the entire cast changed and it was announced the actors would be on book. But the show has potential. I do wonder about its commercial viability, but as a work it has potential. A few good songs, some funny one-liners and an understandable (though over-complicated) plot. However it also has a "Wait..." moment. In the second act, the lead character's best friend calls her with unexpected bad news. Before she picks up the phone, the lead says to the person she is with: "I have to take this. It's an emergency." Typically when my phone rings and it's my best friend I don't think it's an emergency. Even in the days of texting.

A Scythe of Time's entire plot was built on something that didn't make sense. I kept trying to think through it, which may have been more than the authors of an absurdist musical intended, but it bothered me that fundamentally I didn't get it. The newspaper is paying writers to kill themselves and write about their deaths. Let's forgo any thought about how practically the newspaper is physically getting these stories (pesky details and all of that), never is it explained why these writers are doing it. There is a big deal made of the high payment, but no one ever says their family needs it. Obviously the writers are going to be dead, so they don't need the money. A couple of lines mention the writer wanting fame after s/he is gone. Okay. But is that the motivation for everyone? If so, why is the money highlighted repeatedly? This said, when I previously wrote about NYMF I noted something obvious: individuals disagree about shows. A Scythe of Time is a perfect example of this--I found it virtually unwatchable (despite the entertaining Lesli Margherita), but it received a positive New York Times review.

Another general note: I personally think these festivals don't attract an ideal audience for family-friendly shows. Now adult-aimed festivals continue to do family-friendly shows, so others feel differently. Camp Rolling Hills played badly--and indeed I think there is no world where I would have thought it was a superb show--but I think it would have been somewhat more enjoyable with a non-festival audience of people more likely to go see a Camp Rolling Hills production on its own.

If you see a lot of shows or read a lot of reviews, you commonly hear something akin to: "The real problem is the book..." I didn't talk to many people about Dust Can't Kill Me, but I feel that would have been the almost unanimous thought. Kudos to Elliah Heifetz for his music and lyrics. There were some really strong musical moments in this show. As I stated in the other piece, I do indeed always think it is nice to see Elizabeth A. Davis onstage. (Hannah Elless and her could totally play sisters in a trademark John Doyle production. Both play instruments.) Kathryn Gallagher, who was the center of the show, had amazing vocal moments. I liked Richard Crandle. The book though. They're giving a concert? Where they tell a cheap riff on the Jonestown massacre? Except there is no explanation of why. Even if there was an explanation of the concert format (which could possibly have been more the choice of director Srda Vasiljevic than librettist Abigail Carney), the book isn't good. (Dust Can't Kill Me, Lisa and Leonardo and Newton's Cradle are the musicals I saw that were chosen via the Next Link Project in a process discussed in my prior post.)

Lisa and Leonardo I've blocked out, so I'll end on a high note with Newton's Cradle. This show is very, very promising. With its six-person cast, it is perfect for an off-Broadway non-profit birth. It has a touching script, both unique and accessible. It had strong performances, including by composer/lyricist Heath Saunders, and his real-life brother, Aladdin's Trent Saunders. (The show was also authored by their mom, who provided the libretto and co-authored the lyrics with H. Saunders.) In the name of being constructive, I will note the end needs work. The show is really about the two brothers and their relationship rather than simply the autistic brother. However--and I don't want to give anything away if it stays as-is--the storyline between the brothers ends up a loose end.

I've often said I'd be a horrible professional critic. I don't do full reviews, nor have I since I was a music critic at the very start of my career. But one of the things that is special about commenting on NYMF shows is authors have a true opportunity to implement changes moving forward or there can be tough decisions made about possibly abandoning a piece. That's the best thing about developing in a public space. Creatives might not want to listen to any comments. Certainly no one would ever want to listen to all comments. However producers are spending a good amount of money to get a show in the public eye. A real benefit of that is feedback.

Photo of Donna McKechnie and the cast of Icon by Shira Friedman.