There are few things that film buffs and fashion fiends wouldn't do for the chance to converse with legendary Hollywood costume designer Edith Head, who dressed the silent film stars of the 1920s, defined the dress of the Hitchcock blondes, turned Audrey Hepburn into a princess and put Princess Grace in gold lamé.

And for a few more days, they may have their chance.

Though Head passed away in 1981, fans can enjoy actress Susan Claassen's one woman show and portrayal of the iconic costumer in A Conversation with Edith Head, which is wrapping up its Los Angeles-area run on October 24.

Students of costume design, who grew up hearing fairy tale-like stories about the icon, will freak when Classen, bearing an eerie, spot on likeness of Ms. Head, discusses career highlights, dishes about Hollywood relationships and even divulges a bit of Head's private side -- a side rarely revealed. Claassen co-wrote the play with Paddy Calistro, the author who personally knew Head and helped pen her autobiography, Edith Head's Hollywood (published 1983) as well as the reissued 25th Anniversary Edition (published 2008). 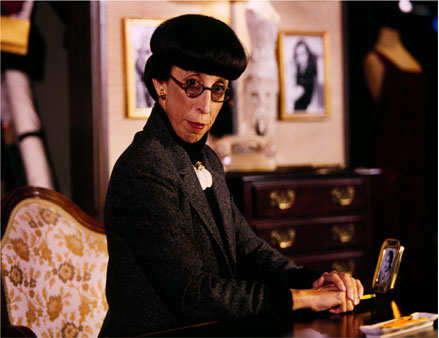 SEEING DOUBLE: Actress Susan Claassen, known as Edith Head's doppelganger, has been playing the costuming icon in her one-woman show since 2002. The play's Hollywood run ends this weekend at the El Portal Theatre in North Hollywood.

Two dress forms wearing classic Head designs flank the set -- Bette Davis' brown silk, sable trimmed dress from All About Eve (1950) and Elizabeth Taylor's teen sensation white tulle, floral bud adorned strapless gown from A Place in the Sun (1951). And the host graciously interacts with the guests in her parlour. Head's favorite sketches and autographed headshots sprinkle the back wall. In true Edith style, Claassen is not shy to critique the audience's outfits, but her impromptu conversations reveal interesting characters in the room, like choreographer and actress Miram Nelson (once married to Gene Nelson), who conversed with Claassen's alter ego about the three times the designer and she worked together during their mutual film careers, including Breakfast at Tiffany's (1961). Film facts, photos and props swirl around the theater during the two-hour play (not including the meet and great and photo ops afterward). 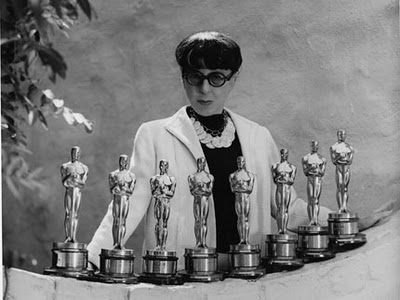 In true Hollywood fashion, Head was terribly competitive (especially during the Academy Award season), and she did not mind bending the truth for her benefit. Though her career is glittered with marvelous achievements, pesky controversies litter her hefty dossier. During her acceptance speech for Sabrina (1954), Head did not honor Hubert de Givenchy, the designer of Audrey Hepburn's most famous pieces in the film, including the little black dress with the bowed boat neck that Head had mass publicized as her own namesake design for years. And the costume illustrator who apparently designed the menswear for The Sting (1973) sued Head after she accepted and was lauded for winning the first Oscar in Costume Design for a film without a female lead. "Accentuate the positive and camouflage the rest," was a famous Edithism. Perhaps she interpreted that statement too literally when it came to matters of paying credit where credit is due on her film projects. 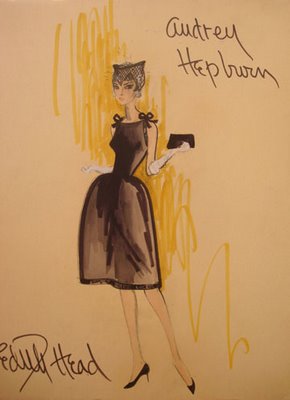 BORROWED DESIGN: Edith Head never credited Hubert de Givenchy, who designed Audrey Hepburn's post-Paris gowns in Sabrina (1954), even though she took home the Oscar and publicized his little black dress with the bowed boat neckline as her own.

Despite gossip and controversy, Head's 50-plus years in film included magical moments. When an assistant's mistaken measurements turned Head's rich brown gown design for Bette Davis into a sack of potatoes, Head was mortified. But Bette Davis simply shrugged the square neckline off her shoulders, thus lifting the waistline into new dimensions, and said, "See, doesn't this look much better." It did. Davis delivered her famous All About Eve (1950) line as Margo Channing in that dress, "Buckle your seatbelts, it's going to be a bumpy night."

Head worked with some of her favorite leading ladies outside the studio as well. Close friends Elizabeth Taylor and Barbara Stanwyck often consulted Head to style and design outfits for various engagements, premieres and events. Head was the costume designer for Alfred Hitchcock's big-budgeted To Catch a Thief (1956), but she felt snubbed when she was not asked to design the future Princess Grace's wedding dress during her nuptials to Prince Rainier. Head instead designed Kelly's grey silk "going away" suit.

Eventually, Edith Head's brand grew from Hollywood back lots to American households. She wrote two books, The Dress Doctor, which sold 8.5 million copies, and How to Dress for Success. She was brutally frank with frumpy American housewives during her guest spots on Art Linkletter's House Party, a radio and television show that featured the first makeover segments of the 1950s and 60s. She and her team even designed "Edith Head Collection" sewing patterns that were sold through the 1950s and 1970s, a testament to Head's mastering of self promotion.

Which she'll gladly tell you about in person at the theatre.