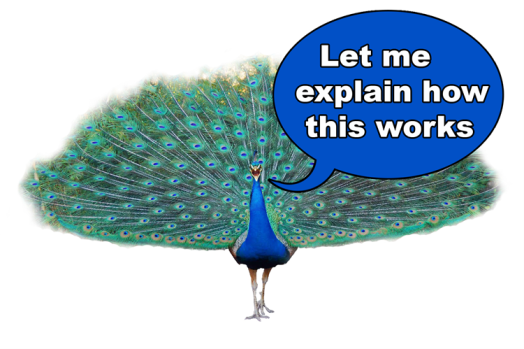 I want to understand - and get your thoughts on - a pattern of behavior I find frustrating. I avoid stereotyping like I avoid measles or strep. So I'm not suggesting most men do this or that women don't. I either observe it more often in men, or feel more frustrated when it happens in an exchange with a man. I do think it is a behavior that shows up on the masculine end of the masculine-feminine continuum. (The term "masculine" refers to ways of thinking and acting that more men than women are likely to demonstrate.)

Let me describe this behavior as I have experienced it from time to time with a man. I ask a question. He talks. I pick up on something he mentions and ask another question about that. He talks. After another question or two from me, he mentions something that relates to my own experience. Seeing an entry point that can make this into a dialogue, I interject a few words about my experience. He does not pick up on this. He does not ask me a question. He talks. At the end, I know quite a bit about him and what he thinks; he knows almost nothing about me. The experience is neither satisfying nor validating.

I am not alone in having this experience. In a recent blog, I referred to Dr. Arin Reeve's study titled, "Mansplaining, Manterrupting & Bropropriating: Gender Bias and the Pervasive Interruption of Women." The title says it all. Reeves defines "mansplaining" as "a man interrupting a woman to explain to her something that she actually knows more about than he does."

I just read an essay by Rebecca Solnit called "Men Explaining Things to Me." Solnit tells about meeting a man who held forth - at length - on the topic on which she had recently published a respected book. He talked on and on, never pausing to hear the fact that she was the expert on the topic - actually the author of the book he was praising. She notes that, "Mansplaining is not a universal flaw of the [male] gender, just the intersection between overconfidence and cluelessness where some portion of that gender gets stuck."

Why does this happen? It could be arrogance. Or it could be insecurity masked by an over-confident style. It could be the guy (or gal) just wasn't raised right. But, absent any of these explanations, "mansplaining" arises out of the masculine ways of being in the world.

In my book and workshops, I point out that the masculine way of seeing the world is as a hierarchy in which status matters a lot. As a result, the masculine style of speech is declarative and confident. The typical man often sounds like he knows what he is talking about - even when he doesn't. (The typical woman, on the other hand, may downplay her expertise and express her ideas less declaratively.) When the prototypical man hears about a problem, he often assumes he is supposed to fix it; the woman may just want to talk about the problem - to vent, get input or just share.

My dear friend Michael offers another explanation. He notes that, in much of the animal kingdom, exemplified by the peacock and the ruby throated hummingbird, the male can attract and impress a female with bright plumage. In the human species, men have no such tools. In fact, women have reversed things and use adornments (lipstick, jewelry and bright clothing) to attract men. The poor human male is left to find other ways to attract and impress a woman. One of those ways is holding forth, dominating conversation and displaying his knowledge.

Frankly, I'd prefer male plumage over "mansplaining" and one-way "conversations."

So how do you 'splain "mansplaining"?