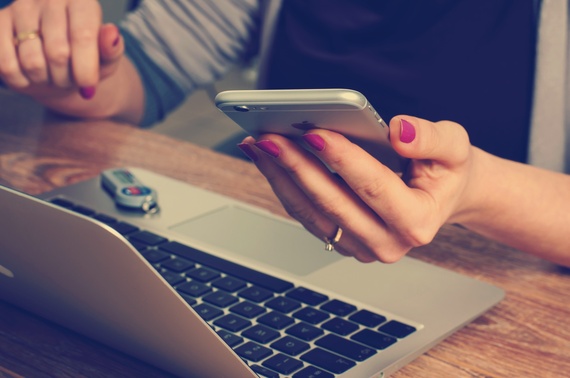 Without fail, the beginning of a new year bombards us with resolution chatter. Will you exercise more in 2016? Eat healthier? Save more money? How are you going to improve yourself over the next 12 months?

Since my holiday experience tends to involve a lot of cheese-based dips and butter-laden desserts, I usually try to hop back on the healthy eating and exercise train as soon as I've cured my New Year's Day hangover. For the past several years, living a healthier lifestyle has always topped my resolution list. But when I look back on 2015, I don't think my healthy habits, or lack thereof, directly contributed to my dissatisfaction with the year's outcome.

2015 was a good year. It wasn't a great year. I don't feel like I accomplished anything of significance in 2015. I want to change that in 2016. I want to make more of an effort towards professional success this year. I want to write more, I want to put my creativity to use, I want to take on projects I've let myself avoid out of fear. I want to experience the feeling of completely throwing myself into a project, working on it for hours, and not caring about anything else in those moments because I'm so absorbed in the world of my own creative expression. I know this is how I will find fulfillment.

But the problem I consistently face is a problem I know a lot of people face, especially women. There's doesn't seem to be enough time in the day to be both fit and successful. There's not enough time to truly "have it all." Yes there are plenty of women who have exquisitely toned bodies and wildly successful careers, sometimes in addition to raising a family. I am not one of these women.

I'm in an office Monday through Friday from 9:00 a.m. to 5:00 p.m. I do some form of exercise almost every day of the week. I spend a lot of time meal planning and cooking so I can eat as healthy as possible. I'm also a total extrovert. I thrive on being around people, so I spend as much time as possible with friends on the weekends. I'm not quite sure where my passion projects fit in. Something's gotta give.

But what should I be willing to give up? I can't give up my job because it pays my rent and bills and student loans. I can't give up exercise and healthy eating because I don't want to get fat. I can't give up time with friends because it's how I de-stress and have fun. But I'm beginning to think the reason I prioritize my time this way is all wrong. Particularly my reason for spending so many hours of my week dedicated to eating healthy and working out, and all the preparation that goes into both.

In an early episode of Lena Dunham's podcast Women of the Hour, it surprised me to hear her reveal that at one point in her life (during a period when she had already found success with HBO's Girls) she did not exercise for an entire year. How could someone just not exercise for a whole year and still seem so happy? I've always thought of those two things as being directly correlated. And then it hit me. It's because she was working. She was writing, acting, and directing her ass off. Say what you want about Lena Dunham's physical appearance, but I think she's beautiful, and the fact that she's such a positive influence on women makes her even more attractive.

I know Lena's had her struggles with food and body image as she details in her book, her podcast, and her newsletter, which have caused a lot of physical and mental anguish in her life, but she has rarely let it get in the way of her productivity. She didn't even let endometriosis get in the way of her productivity. She's continued to prioritize the work she's passionate about, even if it sometimes means sacrificing exercise or not having an ideal diet.

This is how I came to the conclusion that in 2016 I will allow myself to spend less time exercising and meal planning, as long as I spend more time writing. Or more importantly, I will stop making myself feel guilty for not working out every single day or eating perfectly healthy all the time. I don't need to spend so much time trying to perfect my body if I spend more time trying to perfect my work. I don't need to dedicate so much of my time to improving my physical form, when I'm actually pretty happy with the way it is now. I still need to eat well and exercise a few times a week to be a healthy, happy person, but if I decide not to go for a run because I'm going to finish an essay instead, I can't let myself feel guilty about that. In fact, I should feel proud of myself for that.

MSNBC host Melissa Harris-Perry recently summarized this idea perfectly. Melissa was commenting on Oprah Winfrey's new ad for Weight Watchers. In the commercial Oprah says, "inside every overweight woman is a woman she knows she can be." But Melissa wanted Oprah to know something very important:

"From surviving childhood poverty and sexual abuse, you have become one of the most influential humans on the planet. You have Emmys and awards and honors almost too numerous to count. You not only are the first and only black American woman to make the Forbes' billionaire list, you consistently rank among the most generous philanthropists in the world. Sister, you made the wealth, and you share it like no other black woman ever has. With a nod, you can generate a best-seller, launch a career, even help elect a president...

Who you are, what you have accomplished, how you have influenced and altered the world is all so much more important than your dress size. There is not one thing that you have done that would have been more extraordinary if you'd done it with a 25-inch waist."

I couldn't agree with Melissa more. Who exactly is the woman you're trying to be, Oprah? What version of you could possibly be an improvement of the wildly successful woman you already are? The most influential women in this world are important because of their ideas and their actions, not how flat their stomach is.

Time erodes the physical beauty we, as women, spend so many hours of our lives trying to perfect. We can't fit the mold of what this world tells us is beautiful forever. We will all get wrinkles, stretch marks, and fat in places we don't want it. But we can make a mark on the world. We can change the world. We can change it with ideas, with actions, with collaborations. Our work can be timeless. I would rather be remembered for my work than my weight. I'd rather be talked about for my words than for how I look in a bikini. I'd rather be successful than skinny.